The Wergeland monument at Verkland

"Forget not, you are dust! Forget not, you are more than dust!" With these words from Henrik Wergeland Dagne Groven Myhren unveiled the new memorial stone for the poet and the family farm of Verkland. A beautiful and well-shaped natural stone appeared before the eyes of about 200 persons who had turned up for the ceremony. The day was Saturday 12 July 1975. 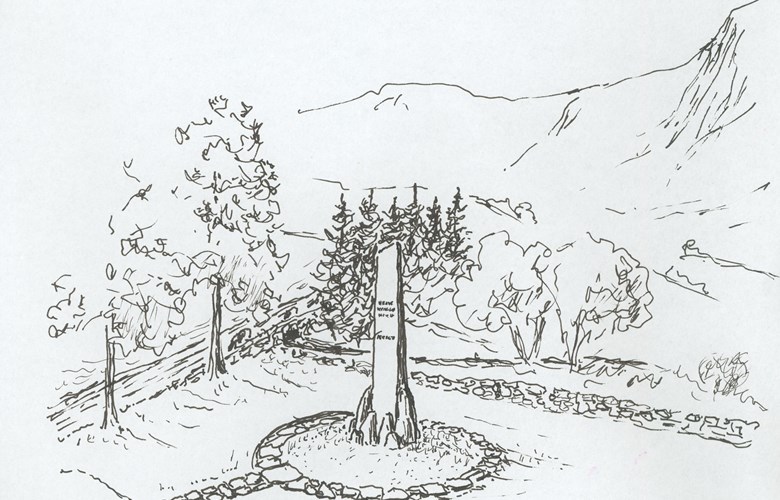 The Wergeland monument in the old farmyard at Verkland, close to the main road. "Brekke Ungdomslag" took the initiative to raise the memorial stone, and its chairman, Endre Brekke, made this drawing.

The farm of Verkland is located in the mountain valley stretching northeast from the boundary to the county of Hordaland in the lower end of the lake of Yndesdalsvatnet. The approximately 14-kilometre-long road to the village centre of Brekke rises to some 400 metres above sea level between the mountain of Olsfjellet to the west and Høgefjellet to the east. In 2001, there are four holdings under the main farm of Verkland. The memorial stone stands close to the road a short distance from the farmyard of holding number 1.

Throughout the centuries, all old farm names have been written in various ways, and this is also the case with the name Verkland. According to Oluf Rygh's books on Norwegian farm names ("Norske Gaardnavne"), the place was written Verckeland in 1603, Wirckeland in 1611, Wircheland in 1667 and Wirchland in 1723. Niels Olsen Wergeland (1717-1792), the brother of Henrik Wergeland's great-grandfather, was an officer and started to write his family name Wergeland while staying in Denmark in the years between 1737 and 1752. When Niels in 1752 applied for a royal licence to carry out trade in Bergen, he signed the application Wergeland. In 2001, nobody uses Verkland as their family name; everybody writes Wergeland.

According to Oluf Rygh, the first part of the name "verk" means 'the land where much work has been done'. In his speech at the unveiling ceremony, Hans Wergeland said that if you see the name in connection with two other place names on the farm, Smedsdalen and Ulsterhaugen ("smed" meaning blacksmith and "ulster" here meaning wind or draught), the first part "verk" may have something to do with the extraction of iron. Iron may have been extracted there before iron became a reasonable and commonplace commodity.

On his father's side, Henrik Wergeland descends from the mountain farm Verkland and has got his name from this place. The male ancestor Jon Olsen (1679-1699) was married to the widow Ingeborg Bendiksdotter Wircheland in 1679. Their grandson (son's son), and
great-grandfather of Henrik Wergeland, was Lasse Olson Wirchland (1725-1761), son of Jon Olson Wirchland. He left Verkland and settled down at Lindås where he in 1747 married Brita Halvorsdotter Fjellsende, daughter of the bailiff at Lindås, Halvor Tollaksen and Brita Mikkelsdotter Fjellsende.
His grandfather was Halvor Lassesen (1755-), married 14 January 1777 to Antonette Jonsdotter Spjeldnes. He was a sexton at Hosanger in Osterøy in 1775. In 1784, he sent in his resignation and moved to Bergen where he was a tradesman. Later on he went to sea and disappeared without a trace.
His father, Niels (later Nicolai) Wergeland (1780-1848) was born on the farm of Mjøs at Hosanger and came to Bergen at the age of four when his parents moved there in 1784. He got his name after his father's paternal uncle, captain Niels Wergeland who spent many years in Denmark and there took the name Wergeland.

In June 1832, Henrik Wergeland set out from the capital on a journey to western Norway. He travelled up the valley of Gudbrandsdalen, across the mountain pass of Sognefjellet, and finally along the Sognefjord, ending up in Bergen. In Sogn he made stops at Leikanger, Balestrand, Brekke and Eivindvik. At Brekke he met relatives, but there is no indication that he went up the valley to pay a visit to Verkland. From Brekke he travelled on the "jekt" owned by his relative Hans Ivarson Instefjord. At Eivindvik the vicar Niels Griis Dahl came on board to invite him to be his guest for a few days. Wergeland came to Bergen in July/August.
It was after this journey that Wergeland wrote the poem "Eivindvig", a eulogy to the vicar Dahl. Best known are perhaps the words concerning what this renowned vicar could make of the simple people who lived in such a barren coastal landscape:

Henrik Wergeland was the first Norwegian poet of worldwide format. Johs. A. Dahle wrote this about him in 1960: "Wergeland was a genius, filled with intense visions, but at the same time down to earth, alternating between the ecstasy of inspiration and practical concerns. Most people think of him as the greatest poet that Norway has fostered, and his thoughts still have a vital force."
Consequently, memorials have been erected in his honour in many places; in Kristiansand, the town where he was born, in the capital and in the Norwegian communities in the USA. In the village of Brekke, people had been thinking of a monument on the family farm of Verkland for many years, and in the 1970s, they finally got around to doing something about it. They raised money, found a suitable place for the monument, as well as a suitable stone, erected the monument and carved an inscription. In the summer of 1975, the work was completed.

On the day of the unveiling ceremony, Saturday 12 July 1975, about 200 persons were present. Bjarne Dåe gave an account of the branch of the family tree that links Henrik Wergeland to the farm of Verkland. Hans Wergeland spoke about the farm and said some words about the interpretation of the farm name. The singer Dagne Groven Myhren sang a selection of songs from Wergeland's poetic world. In a superb way she sang both known and unknown Wergeland songs, many of these to music composed by Eivind Groven. Dagne Groven Myhren also had the honour of unveiling the monument.
In his speech, mayor Takle expressed his thanks to the "Brekke Ungdomslag" for their fine work, and he laid down flowers by the stone. The chairman of "Brekke Ungdomslag", Endre Brekke, gave an account of the work, and thanked everybody for all the help they had received, but especially from the people at the mountain farms.
" - The stone is not meant only to remember a great poet," Brekke said, "it will also remind us that even from poor circumstances people can grow up who in spiritual strength do not have to be inferior to those who come from bigger places. At the base of the stone we have put a ring of smaller stones. This has been done to show that even a great man is not isolated, but can have the support of many," Brekke said.

In 1945, the Norwegian Postal Service issued three commemorative stamps in connection with the centenary of Henrik Wergeland's death. The motif was made after a portrait photograph (daguerreotype) from 1840 or 1841.

The Verkland farms are located in the upper part of the valley from the lake of Yndesdalvatnet just to the north of the county border to Hordaland. In the foreground we can see the old schoolhouse where also the children from the hamlet of Yndesdalen further down in the valley attended. The main road to Brekke passes high up in the hillside in the background, crossing a ridge some 400 metres above sea level. The raw material for the stone was chiselled out of the mountain close to the road in the foreground.
Owner: Fylkesarkivet i Sogn og Fjordane. - Date: 2001. - Photographer: Hermund Kleppa.
Fylkesarkivet i Sogn og Fjordane.
2001.
Hermund Kleppa.

Detail of a drawing showing how the stone is fastened to the base. There are holes at the bottom end of the stone (the root) to be fastened with solid hooks of iron to the concrete base. The side stones are also "rooted" in concrete.

The announcement of the unveiling ceremony in the paper "Bergens Tidende" on 11 July 1975.