Memorial stone over fallen on Husøy churchyard at Straumen

On each of the three churchyards in Solund, there is a memorial stone with the names of the 16 from Solund who were victims of the Second World War. Ten of them belonged to Husøy parish. The monuments are exactly identical and were erected simultaneously.

At the top of the memorials the years 1940-1945 are engraved, then the names in alphabetical order, with the year of birth and death (the ten from Husøy parish are here in bold type), and at the lower end: REIST I TAKKSEMD * AV BYGDEFOLKET (erected in gratitude by the people of the community) 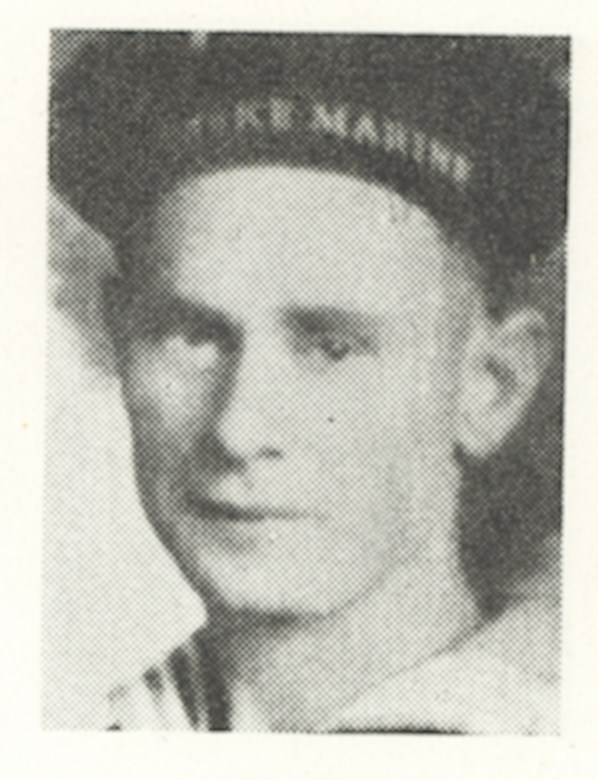 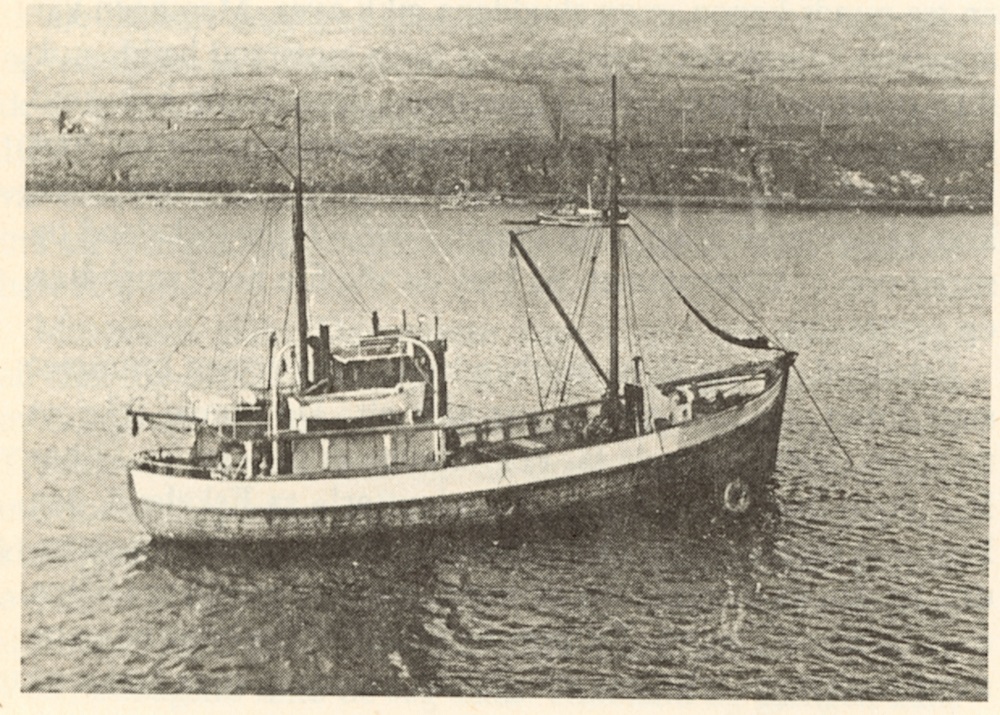 The vicar of Solund during the war, Hjalmar Storeide from Hjørundfjord, took the initiative to have a visible memorial erected over the fallen. In collaboration with the bailiff Johannes Mathiesen and a few others from Solund, Storeide had in deep secrecy taken part in the resistance work during the war years. As early as in the autumn of 1945, Storeide wrote a letter of invitation, describing the purpose and asking people to give generously, for a memorial. In the letter was written that Their names shall be engraved in Norwegian stone, and stand there as a testimony of what they sacrificed, and what hundreds of others in our community were willing to sacrifice. 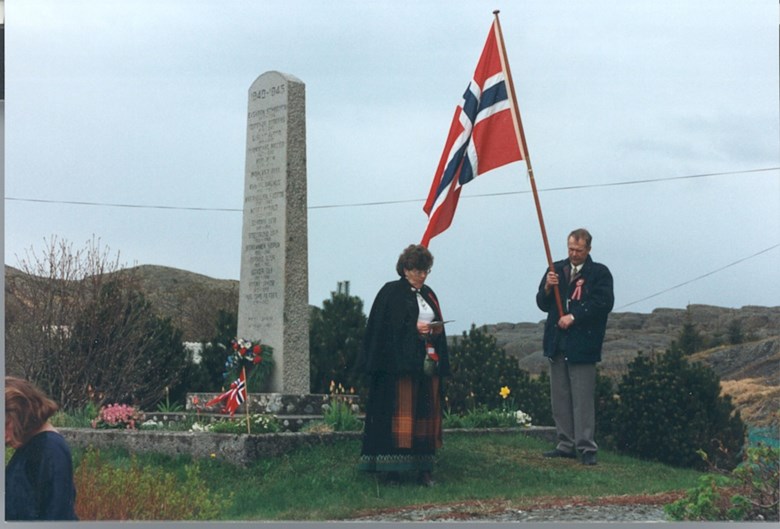 GEITERØY, ANDREAS, fisherman, Solund. Born 13 March 1919 in Solund, son of Johannes E. Strømmen, born 1885 in Solund, and Oline née Wåge, born 1885. Went to England 1941 on fishing vessel. Joined Navy into special service in traffic between Norway and Shetland. Perished en route to Norway with weapons when the MK Feirøy was wrecked in storm, probably in June 1943.

HJØNNEVÅG, BIRGER, seaman, Solund. Born 17 May 1920 in Solund, son of Anton Hjønnevåg, born 1892 in Solund, and Hansine, born 1890 in same place. Course on training ship. Went to sea 1939 and worked as sailor in the merchant fleet during the war. Died 3 June 1942 when the SS Nidarnes was torpedoed in the Gulf of Mexico, en route from New Orleans to Cristobal.

INDREVÆR, OLAV KRISTOFFER, cook, Solund. Born 29 January 1920 in Solund, son of Ole Jensen, born 1883 in Solund, and Kristine née Nilsen, born 1882 in Herdla. Was onboard the SS Norhauk, and perished 21 December 1943 when ship hit a mine at the mouth of the Thames, on way to London.

KVALVIK, EINAR VALTER, fisherman, Solund. Born 7 March 1914 in Solund, son of Johannes O. Kvalvik, born 1879 in Solund, and Matilde née Unneland, born 1883 in Gulen. One year secondary school. Was during war conscripted deckhand in Norwegian Navy. During special mission on Norwegian coast he was taken prisoner 27 March 1943 near Tromsø and was executed by shooting in Tromsø a short time later (same mission as Sjur Trovåg, see below).

STRØMMEN, SØREN JOHAN, machinist, Solund. born 3 March 1906 in Solund, son of Ole Johan A. Strømmen, born 1878, and Serine née Ytreøy, born 1878, both in Solund. One year secondary school, school in woodwork. Took part in war in Norway in spring 1940 and went to England in open boat August 1941, with one brother and two sisters. Served in Navy on minesweeper Harstad, and lost his life when boat was torpedoed in the English Channel 27 February 1943. Buried in London. Referred to in Norsk Tidend (newspaper) in London 10 March 1943, and in Morgenavisen (newspaper) 24 August 1945.

TROVÅG, SJUR OLAI, fisherman, Solund. Born 26 December 1906 in Solund, son of Ludvig Bertelsen Trovåg, born 1867 same place, and Anna Sofie, née Leirvåg, born 1872, died 1938, same place. Took part in the war in Norway in April/May 1940. Went in spring 1942 to England on MK Laila, and joined Navy as deckhand. In 1943, he was onboard MK Bratholm, which entered Toftefjorden to land a unit of Linge Company. They were informed on, taken by surprise by Germans and taken prisoner 29 March at Ribbenesøy. Was sentenced to death and executed by shooting some days later at the shooting range near Tromsø. Buried in Solund (Jan Bålsrud managed to escape).

UTVÆR, OLA MARTHIN, fisherman, Solund. Born 3 February 1912 in Solund, son of Peder Johannessen Utvær and Bertha née Kvalvik. Went with ten others to England 4 April 1942 on MK Laila. He reported for service in Norwegian forces, and was assigned to fishing vessel to provide fish supplies. Contracted tuberculosis and died 12 August 1944 at hospital in England.

ØDEJORD, PETTER BERNTIN, rifleman, Solund. Born 23 May 1918 in Solund, son of Gabriel B. Ødejord, born 1887 in Solund, and Bertha née Olsen, born 1892 at Fitjar. Courses by correspondence. Went to England on fishing vessel Stenborg autumn 1941 with 12 friends. Joined the Navy and was trained as rifleman. Was on SS Novasli until he was taken ill. Died 9 December 1942 in Norwegian hospital in Edinburgh. Buried in Solund.

Sjur Trovåg (1906-1943) was one of three from Solund onboard the MK Brattholm, which on 29 March 1943 arrived at Rebbenesøy in Troms to land four agents of the Linge Company. The boat was informed on and attacked by a German military force. Only one, Jan Baalsrud, escaped. Sjur Torvåg was, together with others who survived, executed by shooting in Tromsø a short time later.
Owner: I <i>Våre falne.</i> - Date: Ukjend. - Photographer: Ukjend.
I <i>Våre falne.</i>
Ukjend.
Ukjend.