Memorials for war airmen at Askvoll

On Midsummer Eve, 23 June 1943, an Allied airplane crashed on the shore near the home of Chester Saltskår at the point of Stavenes. The two Norwegian airmen were killed, and were buried at the church at Askvoll. After the war, a memorial stone was erected on their graves, and in 1993, a memorial plaque was set up at Stavenes. Memorial plaques commemorating two British airmen who were shot down near Stavenes in 1944, have also been set up. 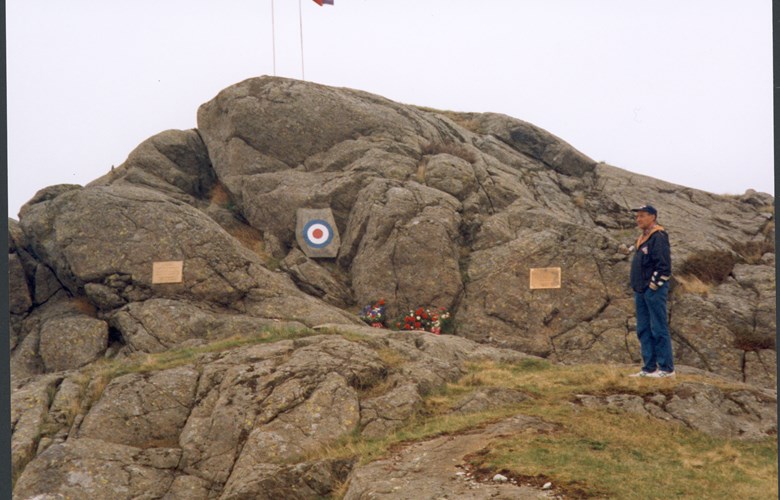 The two memorial plaques commemorating four airmen and Jørgen Stang at Stavenes. Stang took the initiative to have the plaques put up, he encouraged the municipality to cover the costs, and he painted the emblem. The plaque for the Norwegian airmen is to the right. Below is placed a remnant of the aircraft.

Oddny Hollevik, born 1918, lived at Stavenes in 1943. She had taken over the business of the steamship stop at Stavenes after her brother Chester Saltskår had been forced to escape with his family to England the year before. She also cared for the more than 90-year-old Rakel Pettersen. Both were witnesses to the airplane crashes.

I'll never forget that Midsummer Eve 1943. We saw the planes come in at Alden. I had to help Mrs. Pettersen get outside, because she wanted to see what happened to the ships in the convoy, and to the airplanes. While we were standing on the balcony, the plane with Hagerup and Meincke on board miraculously just missed our house. At first I thought they would crash into us, but the pilot managed to wriggle the plane away. The plane flew so low that I could see into the cockpit.

The dead airmen were buried at the church at Askvoll. A short time after the war, a memorial stone was erected on their graves.
For the 50th anniversary, the writer and painter Jørgen Stang, Stongfjorden, took the initiative to have a memorial plaque set up at the place where they lost their lives. The plaque was unveiled on Midsummer Eve 1993.

Jørgen Stang made this inscription:

On Anton Hagerup in the book Våre falne (our fallen)

HAGERUP, ANTON CHRISTOPHER, lieutenant in the Air Force. Born 25 November 1919 in Tønsberg, son of captain Leif S. T. Hagerup, born 1880 in Salten, and Doris Sofie Henriette née Christophersen, born 1894 in Tønsberg. Secondary school diploma. Army air academy and military academy. Was a cadet in second year of military academy until 9 April 1940. Served as airman in the north of Norway during the combats in 1940. Travelled around the world and came to Canada in 1941. Served as fighter pilot in England from June 1941 until September 1942. Was later pilot of Mosquito and took part in many operations off the Norwegian coast. Was shot down on 23 June 1943 by the air defence during an attack on a German convoy off Stavenes in Sogn. Buried at Askvoll.

On Just Finne in the book Våre falne (our fallen)

FINNE, JUST WIEDE MEINCKE, navigator, Lillehammer. Born 2 October 1920 at Vang in the county of Hedmark, son of Johan Thue Finne, born 1875 at Strinda, and Mathilde née Skavland, born 1887 in Mosjøen. Secondary school. Took part in combats in Norway in 1940. Broke off his engineering education at Stockholm Tekniska Institut in the spring of 1941 and travelled around the world to Canada. Was trained as a radio operator and gunman. Joined the Naval Air Force in 1942 and flew missions in Catalina planes. Was trained as navigator and flew in Mosquito planes off the Norwegian coast until he crashed on 23 June 1943 after a mission to Norway, in combat with German planes off the island of Atløya, north of the Sognefjorden. Buried at Askvoll.

Norwegian squadron based in Scotland

Squadron 333 (the Norwegian Squadron) was established in the spring of 1943 and operated from the airfield of Leuchars near Woodhaven in Scotland. Flight B consisted of six fighter bombers of the Mosquito class. At 10 o'clock on the morning of 23 June 1943, two planes took off to patrol along the coast from the Holmengrå lighthouse and northward. In one of the planes were lieutenant Hagerup and petty officer Finne. South of the island of Ytterøya they detected a German convoy of three ships. The lead ship looked like an old passenger steamship. The planes attacked immediately with Hagerup in the lead. A short distance above the ships his plane was hit by anti-aircraft fire. The Mosquito spinned three times and crashed on the beach a short distance northwest of Chester Saltskår's house.
Hagerup had been able to eject himself, and the Germans found him a short time later in the sea near land. His parachute had not unfolded properly. Finne was found a few days later. This was the first time the Norwegian Squadron 333 Flight B lost airmen in combat.

19 September 1944 was also a dramatic day off the point of Stavenes. An Allied air force attacked a convoy of two ships, the Bergenske Dampskibsselskap (steamship company) SS "Lynx" and the SS "Tyrifjord". A fighter bomber of the Beaufighter class was shot down, and both airmen, the British Hossack and Wicks lost their lives. They went down with the aircraft, which remains at around one hundred metres' depth.

At the 50th anniversary of the shooting down in 1944, a memorial plaque was unveiled near the other plaque. Around 20 persons attended the unveiling ceremony. Kjell Ask, in unveiling the plaque, thanked the Englishmen for their sacrifice. Beside the plaque, there is an air force emblem painted by Jørgen Stang.

The two Norwegian airmen were buried in the churchyard of Askvoll church with a German guard of honour. German soldiers also lowered the coffins into the graves, to the left outside of the picture.
Owner: Marie Follevåg. - Date: 1943. - Photographer: Abraham Strømmen.
Marie Follevåg.
1943.
Abraham Strømmen.

Lieutenant Hagerup was trained at the Norwegian military academy of Little Norway in Canada. On 28 March 1946, the postal service issued a stamp in memory of the Little Norway station in Toronto, later in Muskoka.