The altarpiece in Førde church

Quite a few people have become interested in the altarpiece in Førde church once they have seen it. It is unique, rich in motif, fine in the carving, and for its age with a well-preserved decoration. The altarpiece, which is from 1643, was donated to the church by the vicar Peder J. Finde and his wife, Barbara Nitter. 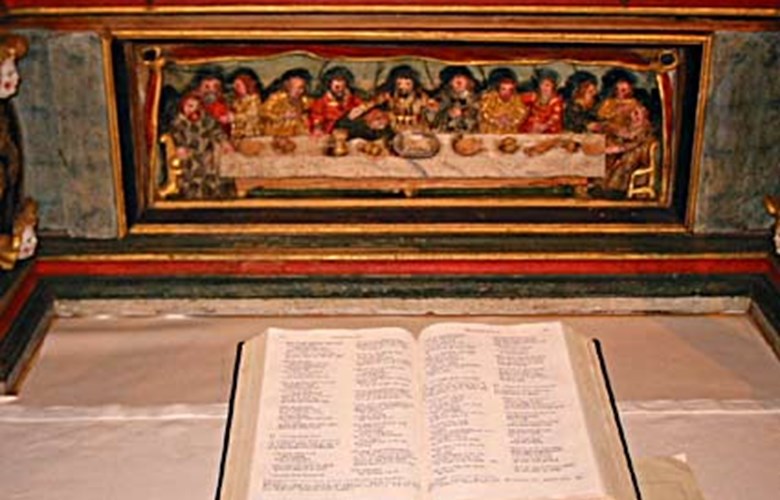 The lowest picture section of the altarpiece represents the holy supper institution. The holy supper is a memorial meal, where one receives Jesus and one's trespasses are forgiven.

From the school attic to the church

In 1928, there was a hot controversy over the altarpiece in Førde. The question was whether to install the old altarpiece from 1643, or a new one, painted by Ferdinand Kierulf Tranaas. When the church was new in 1885, an altarpiece frame was installed, but instead of a painting inside the frame, a green cloth was stretched out as a background for a simple cross. Underneath were the words: "Kom Jesus Kristus ihu! (remember Jesus Christ)" For financial reasons an altar painting was put off. When the old altarpiece could no longer be stored in the school attic, it was installed in 1920 in the church on the north wall of the chancel. Quite a few people began to advocate putting it up on the altar, and this happened without any formal decision. On Christmas Day, 1925, the congregation was surprised to see the baroque altarpiece in place. Opinions were divided, but the altarpiece was allowed to stand. In the autumn of 1928, Tranaas withdrew his altarpiece, and since then the old altarpiece has been safe in its rightful place.

Gift from the vicar Finde

The altarpiece is regarded as one of the most valuable baroque altarpieces in the country. "The best example among the preserved west Norwegian altarpieces of a harmonious combination of art and theology ", Sigrid Christie wrote. The altarpiece was a gift from Peder Jørgensson Finde, vicar in Førde from 1637, and Barbara Nitter, and can in one respect be said to be the memorial of the family Finde, but still made "To the honour of God and to the decoration of his house ".

Finde must be seen as responsible for the theological composition. The altarpiece was carved in 1643, probably by Anders Smith, and installed unpainted in the church that same year. The written plates at the base give information about some of the history of the family, and that the painting must have been carried out before 1650, before Finde's (PF) first wife, Barbara Nitter (BN), died. The written plates at the altarpiece base were then changed and moved, so that the initials of the new wife, Anne Rasmusdatter Stoud, (ARDS) were added with the date 1666. The text on the written plates is "Vita humana fugax" (human life is short), "Vita rosa" (life is wonderful) and "Memento mori" (remember death).

Earlier it was believed that the altarpiece had been painted by Caspar Helvig in 1666. It is uncertain if he did so before 1650. The paint work has at any rate been done to supplement and enhance the lavish, plastic fittings and the architectural upright construction of the altar, with alternating grey, pale-red-brown, and yellow local colours, which in no place promotes itself at the cost of the wood carver's ideas of form, was Domenico Juul Erdmann's opinion.

The altarpiece, around four metres high, expresses Lutheran orthodoxy in the picture language of the baroque and tells the fundamental salvation events in Lutheran interpretation based on the contrasts: law - gospel, sin - mercy, and death - life. In classical manner the Jesus events are represented at four levels, at the foot the Holy Supper institution, then the crucifixion, Jesus, and the two thieves. The women at the feet of Jesus are Mary, his mother, and Mary Magdalene, in the background are Roman soldiers. The cross of Jesus is represented conventionalized and interpreted, with a gilded border, as distinct from the crosses of the thieves, which are described naturalistically. The lightning at the cross of Jesus expresses the wrath of God: "Nailed to a cross on earth hangs under the thunder of wrath" (Norwegian Hymn Book, 158,1). A third phase is the burial of Jesus, and then the resurrection. The angels push the stone from the grave, and soldiers flee in panic. The resurrected is standing in a nimbus cloud, and the cross has become a mark of victory with a triumphant banner. The women were the first witnesses of the empty grave.

Figures on the altarpiece

Uppermost on the altarpiece the triumphant Christ is standing with a banner of victory. This story is then interpreted through the structure of the altarpiece. High up, beneath the triumphant Christ, a priest is standing with a stole. On his right side are the law tablets, and on the other the letter of freedom, the gospel. The inscription here is taken from Luke 11,28: "Blessed are they that hear the word of God". This is the right teacher, who preaches law and gospel, and teachesthe word of God correctly. To this the two characteristic animal figures correspond, the dragon and the lion. While all others are portrayed with their faces turned to us, these two are facing each other. The Jesus event is thus interpreted as a struggle and victory act, and places the congregation into the same struggle. The dragon symbolizes the enemy and adversary of God (Revelation 12,3; 13,2.4; 16,13; 20,2). Who breaks the law and is not forgiven, is in the power of the devil and under the curse of the law. Text: "Cursed be he that confirmeth not all the words of this law to do them. And all the people shall say, Amen(Deuteronomy, 27,26).

The lion of Israel is here a symbol of Christ, victor over evil, the dragon, in accordance with: "Weep not: behold, the Lion of the tribe of Juda, the Root of David" (Revelation 5,5) - and the scripture continues: ¿hath prevailed to open the book, and to loose the seven seals thereof". The lion carries a triumphant wreath; behind: "The tree of life" (Revelation 22,2.14.19). The four evangelists, with their symbols, are standing at the same level.

On the law side there is outermost a portrayal of Moses receiving the Ten Commandments, and on the opposite side: the birth of Christ. The shepherds, together with Mary and Joseph, are the first receivers of the gospel.

On each side of the Calvary scene there are two well-defined figures. The woman on the left is probably Mary, the mother of Jesus (but could also be Anna, the daughter of Fanuel). The most characteristic person is the old man on the right, Simeon in the temple. He is holding the Holy Infant in his arms as told in Luke 2,25-36. But something does not fit in, for Simeon is represented in a high priest's costume, with chest cloth with twelve gems for each of the twelve tribes of Israel. In church art there are besides this several representations where the Holy Infant meets the high priest in the temple in connection with the circumcision. Thus it could in principle be a question of mistaken identity, which has given a new and deeper interpretation of Simeon. The god-fearing man, who had been waiting to get to see Messiah, represents all of the people of God from the old testament on, in the same manner as the high priest.

Old Simeon as he is represented in Førde church, is unique in Norwegian church art. One of the first to represent Simeon dressed in the garb of a high priest is Stefan Lochner (1400-1451), in the picture "Kristi framstilling i tempelet (the presentation of Christ in the temple)" (Cologne 1447). Later representations make Simeon more and more the priest in the temple, for example Albrecht Dürer in 1505, an interpretation which over time disappeared in newer representations.

The about four-metre-high altarpiece expresses Lutheran orthodoxy in the picture language of the baroque and tells the basic salvation events in accordance with Lutheran interpretation based on the contrasts: law:gospel, sin:mercy, and death:life. It displays a teeming diversity, yet it is composed with restraint.
Owner: Førde kyrkjekontor. - Date: 2001. - Photographer: Jon Baxendale.
Førde kyrkjekontor.
2001.
Jon Baxendale.

At the base of the altarpiece the institution of the holy supper is represented. Above this there is a representation of the crucifixion, Jesus, and the two thieves. Beside the cross are Mary and Mary Magdalene, in the background two Roman soldiers are standing. The cross of Jesus has a gilded border, while the crosses of the thieves are portrayed naturalistically. The lightning behind the cross of Jesus expresses the wrath of God.
Owner: Førde kyrkjekontor. - Date: 2001. - Photographer: Jon Baxendale.
Førde kyrkjekontor.
2001.
Jon Baxendale.

Simeon in the temple is holding the Jesus child in his arms. He is represented in the costume of a high priest, with chest cloth with twelve gems for each of the tribes of Israel. In church art there are besides this several representations where the child Jesus meets the chief priest in the temple in connection with the circumcision.
The section to the right shows the shepherds paying homage to Jesus in the stable.
Owner: Førde kyrkjekontor. - Date: 2001. - Photographer: Jon Baxendale.
Førde kyrkjekontor.
2001.
Jon Baxendale.