The bailiff farm at Bruland

The bailiff farm at Bruland is held to be one of the best preserved examples of a high-ranking official¿s residence in western Norway. The main building in late baroque style dates from the 1750s, and it was moved to Bruland in 1789. It has been a listed building since 1924. 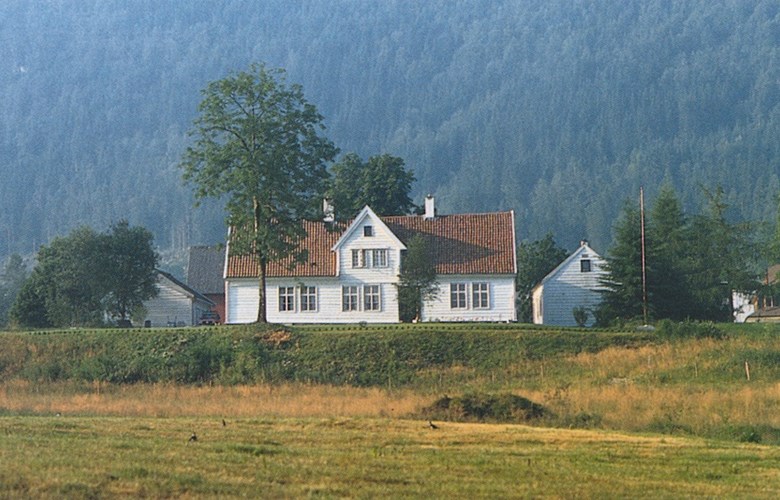 The residence of the bailiff for Sunnfjord and Nordfjord was located close to the road at Bruland in Førde. In the 1990s, the main building was subjected to major restoration work.

The bailiff residence for Sunnfjord and Nordfjord was located on the island of Svanøy until 1789 when Nikolai Lambrechts bought a farm at Bruland. In fact, the Bringeland farm in Gaular was the official bailiff residence, but none of the bailiffs wanted to live there. After Lambrechts, the bailiffs from Niels Chr. Kierbo in 1809 to Peter Chr. Hvoslef in 1836 bought the place Bruland as their private property. When Hvoslef died in 1853, his widow was left with a farm and many children on her hands. Consequently, the state authorities bought Bruland to be used as a bailiff residence and sold the Bringeland farm. Eleven bailiffs in all resided at Bruland until the office was discontinued in 1898. The place was owned and run by farmers until Per and Cecilie Eggen took over the property in 1989. 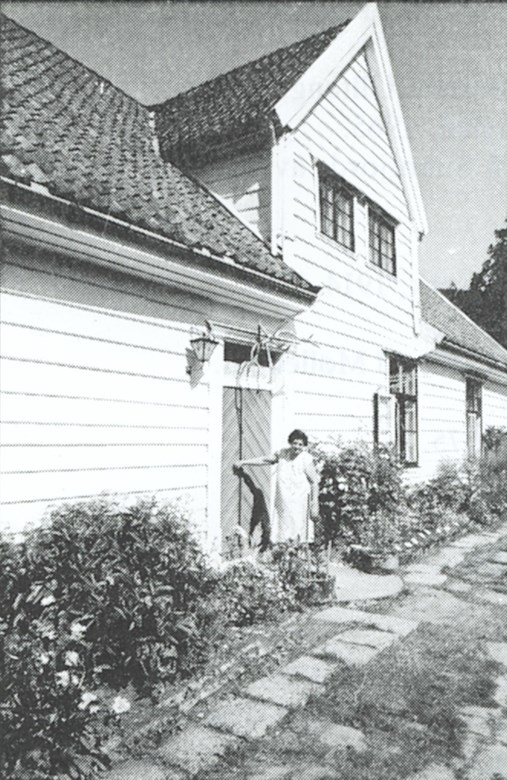 The main building at Bruland was originally built at Svanøy in the 1750s by the "big bailiff" Hans Thiis Nagel for his son Jens Worm Nagel who succeeded him in this position. In 1868, the farmyard of Bruland counted no less than 25 buildings, of these 13 in the main farmyard: the main building (residence), office building, ¿borgstove" (quarters for the farmhands and servants), timbered cowshed, stable, storehouse for hay and grain, pigsty and hen house, ¿eldhus" (a multi-purpose cottage used mainly for washing clothes and baking), a cart shed, a house used for drying, a mill, in addition to a boathouse down by the sea for the bailiff¿s ¿vengebåt" ( a large rowboat with three pairs of oars and a cabin at the stern). Five listed old buildings still remain in the farmyard today: the residence, the office building, the "eldhus", the "stabbur" (storage house for food), as well as another house, perhaps previously used as a tenant¿s residence.

The main building is a cog-joint timber house on one level, measuring 21 by 10 metres (about 70 by 33 feet), with the original panelling with wooden nails. Three of the walls are painted white, whereas the eastern wall is red. The house has a steep gable roof with high dormers on either long side. Most windows are original, but in the dining room and lounges they were replaced with late Empire style in the 1850s. The main door and the garden door in Empire style must have been added somewhat later, but the door on the eastern wall has kept its original late baroque style. The room plan on both floors has not been changed.
In the kitchen there is an oil painting of 20 huge salmon and four casts of big salmon caught in the river of Jølstra, along with inscriptions of time, place and the names of the proud fishermen. The living-room walls have been restored with linen wallpaper and their original colours, as well as with stencils and stripes décor. The main living room to the west is of special interest. In this room the present owners have uncovered - under five layers of wallpaper and two coats of paint - landscape paintings on striped canvas, painted at Svanøy. These paintings are signed G. A. Glöss, 1768. All the walls, more than 50 square metres, are decorated in a fashionable, naïve faience style, where the colours blue and grey dominate. Glöss must have been a travelling artist, also known to have carried out similar wall paintings on the high-ranking official¿s farm of Flahamar in Luster at approximately the same time. 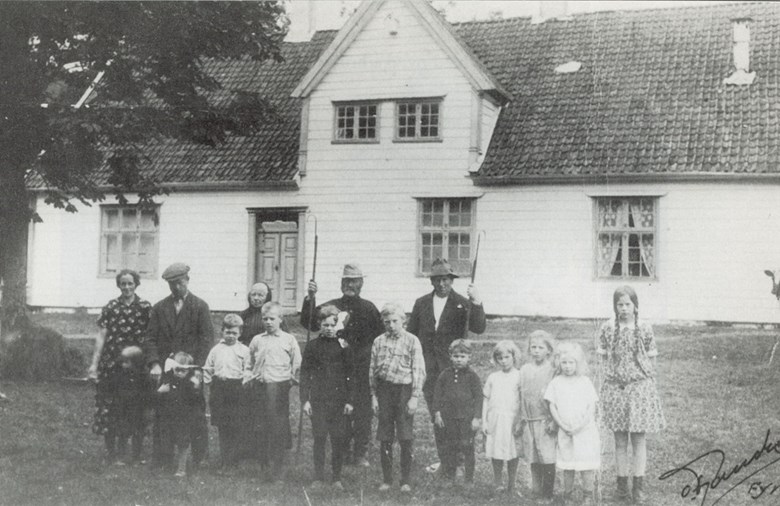 The story of the bailiff¿s farm is also a story of poor maintenance, particularly after the farm was taken over by the state authorities. In 1856, the bailiff J. Z. Magnus had to borrow 1430 ¿speciedaler", i.a. for the main building which ¿was in sore need of repair and changes". In the period between 1868 and 1894, various building were either sold or torn down. One bailiff complained that his predecessor had left the house in such a poor condition hat it could hardly ¿provide shelter and comfort for a civilised man". In a number of rooms floor boards and panelling were ¿infected by fungi", the roofing tiles were overgrown with moss, and some of the outbuildings were derelict. Throughout the years, the house was modernised, but no major changes were carried out. In spite of many layers of wallpaper and coats of paint, the decay was extreme when the present owners took over. However, due to hard work and effort on the part of the owners, and a certain amount of support from the preservation authorities, the house is now once more in an excellent condition.

The bailiff farm - holding no. 15 under the farm of Bruland - can be seen in the middle of the picture with the farm houses forming a square. The residence to the left and the outbuilding to the right. In the big house between the outbuilding and the road the Bruland pallet factory was started up. To the left and below the bailiff farm, holdings no. 8 and 4 are located. In the background on the other side of the river Jølstra, we can see the gravel pit at Via.
Owner: Johan Ottesen. - Date: 1963. - Photographer: Telemark Flyselskap AS.
Johan Ottesen.
1963.
Telemark Flyselskap AS.