The municipality of Gulen has four memorial stones for war victims from the Second World War. One stands at Byrknesøy, one on the churchyard at Mjømna church, one at the graveyard at Indre Oppedal, and one at the Eivindvik church. On the memorial stone at Eivindvik there are 16 names. 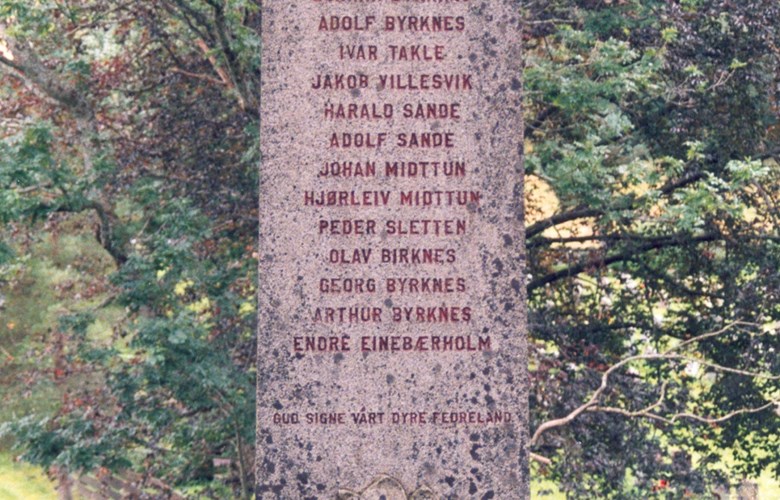 The memorial stone for war victims at Eivindvik stands close to the gate in to the church. 16 names are carved into the stone, all who died from the then municipality of Gulen in the Second World War.

The memorial stone at Eivindvik stands on an open space by the entrance gate to the church. The stone has the shape of a prism and is some two metres high. At the top is engraved: THESE FELL IN THE WAR YEARS * 1940-1945. Then the names of the war victims in the chronological order of the dates they died. (The biographies below are written in the same order.) Under the names: GOD BLESS OUR DEAR MOTHER COUNTRY. At the bottom there is a peace symbol, the same symbol we find on a memorial stone at Dale church in Fjaler.

On the memorial stone there are 16 names, all war victims from the then municipality of Gulen. Out of these 16, nine were seamen in foreign trade, four were in the navy, two died in action in Valdres, and one was sentenced to death and executed by shooting.
The memorial stone was unveiled on Sunday 3 August 1947, attended by a huge crowd. Major Skåtun gave the unveiling speech, and a naval crew stood guard of honour. 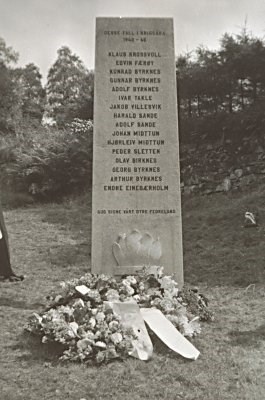 Biographies in the book "Våre falne"

KROSSVOLL, KLAUS, engineer, Gulen. Born 17 December 1918 in Gulen, son of Ola Klausen Krossvoll, born 1885 in Gulen, died 1920 same place, and Sygni Sørensdatter née Kjelby, born 1888 same place. Middle school. Worked as an engineer on the Swedish SS Rudolf, and died on 3 December 1939, when the ship sank after an explosion caused either by a mine or torpedo off the English coast.

BYRKNES, KONRAD KRISTOFFERSEN, fisherman, Gulen. Born 7 May 1915 at Byrknesøy, son of Kristoffer Kolbensen, born 1889 at Byrknesøy, and Ingeborg née Martinusen, born 1884 at Fedje. Married at Byrknesøy 1940 to Berly Ingvaldsdatter Nordheim, born 1917 i Gulen. 1 child. Lost his life as a machine-gunner in action at Bagn in Valdres on 20 April 1940. Buried at Mjømna church.

BYRKNES, GUNNAR MIKALSEN, seaman, Gulen. Born 11 May 1918 in Gulen, son of Mikal Andreassen, born 1871 at Austrheim, and Amalie née Søreide, born 1884 in Fjaler. Was a motor man on MS Norne and lost his life on 1 August 1940 when the ship was torpedoed off Pentland Firth in Scotland. His brother Adolf lost his life at sea in 1941.

BYRKNES, ADOLF, seaman, Gulen. Born 2 June 1921 in Gulen, son of Mikal Andreassen, born 1871 at Austrheim, and Amalie née Søreide, born 1884 in Fjaler. Was a fisherman when he went to sea in 1939. Worked in allied service. Lost his life on 2 March 1941 when SS Augvald was torpedoed in the North Atlantic. His brother Gunnar died at sea in 1940.

TAKLE, IVAR, stoker, Gulen. Born 19 September 1900 at Brekke in Lavik, son of Ola Nes, died 1940 at Brekke, and Ingeborg née Takle, born 1872, died in the USA. Was a stoker on SS Diana that went from Milford Haven on 26 September 1940 and disappeared en route to Plymouth. Wreckage from the ship drifted ashore on 7 October 1940.

VILLESVIK, JAKOB AMANDUS, ordinary seaman, Gulen. Born 7 February 1918 in Gulen, son of Nikolai Råke, born 1897 in Solund, and Matilde née Villesvik, born 1894 in Gulen. Worked on SS Samnanger and died on 21 December 1940 when the ship was torpedoed by a German submarine in the South Atlantic, en route from Oban to Sierra Leone. (Note: Confer the caption under the picture of the ship).

SANDE, HARALD AUGUST, stoker and donkey man, Gulen. Born 12 November 1909 in Gulen, son of Andreas Bertin Johansen Sande, born 1884, and Elina Josefine Hansdatter née Kittelsvik, born 1885, both in Gulen. Worked for a number of years as a stoker in local trade, and left to work in foreign trade on 7 April 1940. Sailed in allied service and died on 13 March 1941 when SS Samlanes was hit by a mine at Lizard Head, Cornwall. His brother Adolf also died in 1941.

SANDE, ADOLF LEONARD, carpenter, Gulen. Born 28 September 1913 in Gulen, son of Andreas Bertin Johansen Sande, born 1884, and Elina Josefine Hansdatter née Kittelsvik, born 1885, both in Gulen. Started as a seaman on Fylkesbåtane in Sogn og Fjordane, and left to work in foreign trade in 1938. Sailed in allied service and fell overboard and drowned on 26 February 1941 in a storm when the ship was en route from Bermuda to Europe. His brother Harald also died in 1941.

MIDTTUN, HJØRLEIV, radio operator, Fana. Born 13 June 1907 in Gulen, son of Otto J. Midttun, born 1854 in Gulen, and Nikoline née Mølmedal, born in Lavik. Married 1938 at Nesttun to Ellina Forthun, born 1912 in Bergen. People's high school, radio school. Worked as radio operator on Kosmos II, who when the war broke out went to England and later sailed in allied service. Died on 28 October 1942 when the ship was torpedoed en route from New York to Clyde. His brother Johan was shot in 1941.

SLETTEN, PEDER REIDAR, deck-hand, Gulen. Born 27 January 1921 in Gulen, son of Bertin Bergesen Sletten, born 1889 at Lindås, and Anna née Pedersen, born 1887 in Gulen. Worked as farmhand and fisherman and helped people escape to England. He was forced to escape to England in 1941 and joined the Norwegian Navy. Lost his life on 18 November 1942 when the corvette Montbretia shipwrecked in the Atlantic.

BIRKNES, OLAV LEONARD, seaman, fisherman, Gulen. Born 7 December 1906 same place, son of Karl Severin Endresen, born 1871 in Gulen, and Martha née Torbjørnsdatter, born 1870 at Bremnes. Worked as a seaman on MS Uranus of Bergen. Went to Shetland on a fishing boat in May 1941, and took with him a Gestapo policeman from Bergen. Joined the Norwegian Navy. Died on 22 April 1943 on the return crossing to Shetland after a raid along the Norwegian coast with the fishing vessel Gullborg.

BYRKNES, GEORG NORVALD, fisherman, Gulen. Born 9 October 1921 in Gulen, son of Lyder Andreassen, born 1882, and Sina née Sørensen, born 1890, both in Gulen. Went to England and served in the Norwegian Navy there. Lost his life on 4 January 1941 when the minesweeper Bodø hit a mine off Aberdeen after a raid along the Norwegian coast. Article about him and his brother Arthur in the newspaper Bergens Tidende in January 1945.

BYRKNES, ARTHUR, fisherman Gulen. Born 1 September 1917 in Gulen, son of Lyder Andreassen, born 1882, and Sina née Sørensen, born 1890, both in Gulen. Took part in the action in Valdres in 1940. Went across to England in 1941 and was sent on a special mission from Scalloway on Shetland to Norway in December 1942. The boat was probably sunk by German planes off Træna. Article about him and his brother Georg in the newspaper Bergens Tidende in January 1945.

BYRKNES, ENDRE BERNHARD EINEBÆRHOLM, stoker, Gulen. Born 26 January 1918 in Gulen, son of Kristoffer Einebærholm, born 1889 in Gulen, and Anna née Birknes, born 1894 same place. Went to sea in 1939, and sailed throughout the war in the merchant marine. Survived three torpedo attacks, twice in 1940 and once in 1943. Lost his life on 27 February 1946 when SS Hodnaberg went down off Hals on the Danish coast after hitting a mine. Buried at Gulen. Reference to him in "Redningsbaaden" no. 5, 1946.

In the autumn of 1940, Jakob Amandus Villesvik worked on SS Samnanger of Bergen. In late November the ship was in a convoy from Halifax, Canada to Sierra Leone. On 29 November, the ship lost the convoy, and nothing was heard of the ship until after the war, and then from German sources. A German swubmarine discovered Samnanger on 2 December. The submarine sank the ship with one torpedo and continuous gunfire. The whole crew lost their lives.
The date information of 2 December here does not match the reference to Villevik in the book "Våre falne". This information, taken from Nortraships flåte [..],, published in 1976, is the correct one.
Owner: I <i>Nortraships flåte [..].</i> - Date: Datering. Ukjend. - Photographer: Ukjend.
I <i>Nortraships flåte [..].</i>
Datering. Ukjend.
Ukjend.
resources:
Våre falne. Oslo 1948.
Hegland, Jon Rustung: Nortraships flåte [..]. Bind 1. Oslo 1976.
Avisa Firda. 08.08.1947. Førde.
Austgulen, Ingolf: Krigsminner frå Gulen og Brekke. 88 s. 1995.