At the entrance to the museum "De Heibergske Samlinger - Sogn Folkemuseum" at Kaupangerskogen there is a memorial commemorating the founder, landowner G. F. Heiberg. The memorial was unveiled on Sunday, 26 August, 1951. Honorary member in "Sogn Historielag", Anders A. Skaasheim gave the speech at the unveiling ceremony. 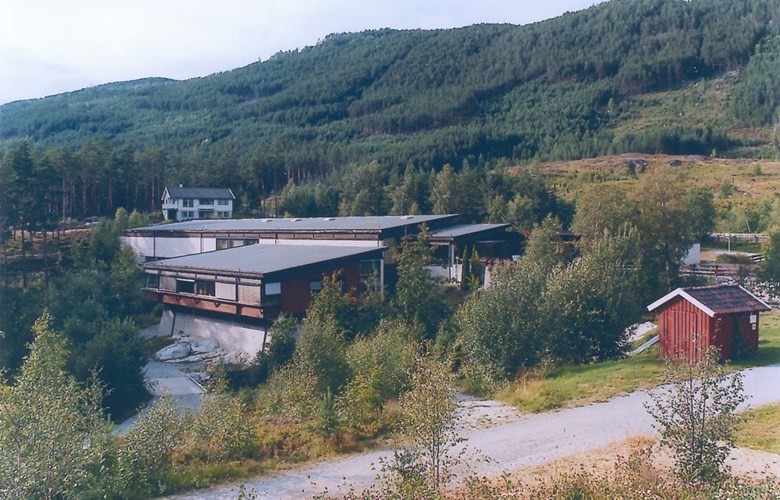 The Heiberg memorial at the main entrance to the museum at Kaupangerskogen.

The Heiberg memorial is a bust in cast bronze placed on a pedestal of light granite. The founder of De Heibergske samlinger - Sogn Folkemuseum is facing the road leading up to the entrance of the main building of the museum, facing those who pass by, visitors or those who work at the museum. The pedestal has the following inscription: 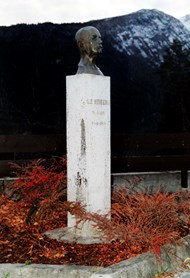 In connection with the unveiling ceremony, the "Historielaget for Sogn" (the Historical Association for Sogn) organized a meeting. On the programme there was a speech given by Lars Uglum (mayor of the host municipality of Sogndal and chairman of the council), Anders Skaasheim (assistant manager and honorary member) and P. S. Hjermann (mayor of Lærdal and vice-chairman of the board). The Sogndal Brass band played and there was a guided tour of the museum.

"History whispers in every nook and cranny"

Mayor Uglum wished everybody welcome to the gathering, and he had a special greeting to the widow, Anna Heiberg:

"History whispers in every nook and cranny here. History is a speech that does not sound particularly relevant at present, but history is a good teacher and a cultural factor of the highest value and importance. G. F. Heiberg was one of those who taught us to take care of our historical and cultural heritage, and we are extremely grateful to him on this account. He started on a huge project, and for this reason we are gathered here today to unveil his bust.".

From family museum to folk museum

In 1951, what had started as a family museum at Amla had increased to about 20 buildings and some 19 000 objects, tools and implements. In his speech, Skaasheim summed up this development:

Hans H. Knagenhjelm Heiberg started the collection work and his son Gert Falck Heiberg continued. In 1909, the "Historielaget for Sogn" was founded. At that time Heiberg had built a museum building and set up the building called "Underdalsstova". In addition, he had collected 2000 recorded objects in what he called "Sogn Folkemuseum". Later on the name was changed to "Sogn Folkemuseum - De Heibergske Samlinger", because it was desirable to include the Heiberg name in the name of the museum. The local municipalities now joined in, and the Ministry of Church Affairs appointed a representative to the board.

Skaasheim said the following about the man, G.F. Heiberg:

"- Heiberg had a strange gift for looking up the things he wanted and he had such an untiring energy. People said that he was simply collecting old rubbish. Gradually people opened their eyes, realizing that the "rubbish" might be a valuable cultural treasure.

Heiberg was self-taught in the fields of history and museum work, and he was exceptionally well informed. He was the person who knew most about the old handicrafts, tools and implements. "He was so knowledgeable," said the speaker, "that he could even give guidance to experts and scientists."

A memorial and a reminder

At last Skaasheim said something about what the memorial was meant to represent.

"- The bust is to remind us of the work that has been carried out, as well as reminding us that the future of the people demands that their past is not forgotten."

Major Per Tang (council member) then unveiled the flag and "the familiar features of Heiberg's face appeared in the sunshine". The people attending the ceremony then honoured his memory with one minute's silence.

The environment creates the man and his work

P. S. Hjermann gave a speech for Mrs Anna Heiberg. He pointed out that it is the environment that creates the man and his work. The home is the platform the man is standing on in his work. The speaker thanked Mrs Heiberg for the faithful support she had shown to her husband, giving him the "platform" he needed.

For this occasion the signature "A.S." (Anders Skaasheim) had written a song to the melody At far min kunne gjera. The third verse goes like this (freely translated):

Heiberg left a great memorial
at Amla through his work.
He had the right vision
and a strong sense of generations past.
Thus his name will remind us
that he was an interpreter of his times.
He could find treasures
among hard-working people.

G. F. Heiberg 1872-1944. The bust is made by the artist Nicolai Schiøll in 1942. The owner is the Heiberg Family Museum. Heiberg was chairman of 'Historielaget for Sogn' from its foundation in 1909 until he died. He was also editor of the History Association's magazine and he also contributed with a number of articles.
Owner: Fylkesarkivet i Sogn og Fjordane. - Date: 2000. - Photographer: Hermund Kleppa.
Fylkesarkivet i Sogn og Fjordane.
2000.
Hermund Kleppa.

The unveiling ceremony on 26 August, 1951. Advertisement in the local paper 'Sogn Folkeblad'.