At Ask in Askvoll municipality, the county of Sogn og Fjordane for more than 40 years provided a sanatorium for tuberculosis patients. Tuberculosis was the great scourge during the first half of the 20th century, and a number of homes and sanatoriums were built, where the afflicted patients were given care and treatment. Only after the First World War were effective medicines developed, and the number of tuberculosis cases fell drastically. 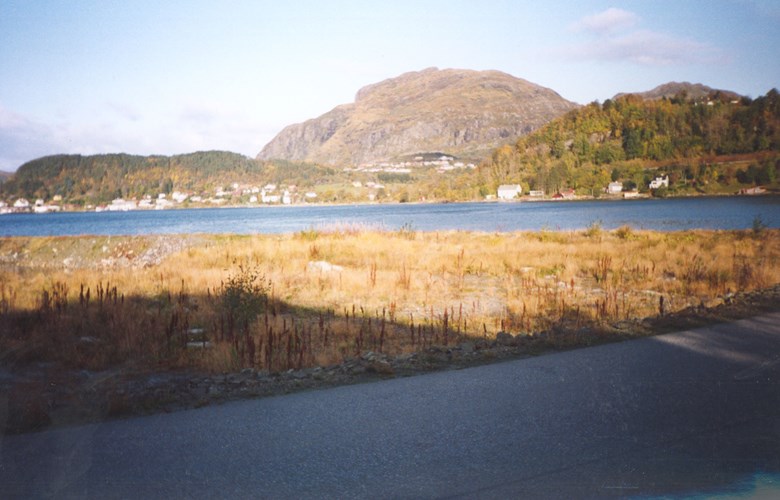 Askvoll and western Ask seen from the bay of Olsetvikane, with the nursing home in the middle of the picture.

The fight against an epidemic disease

Tuberculosis, or "consumption", which this disease was called, spread rapidly during the 1800s. Increased urbanisation and denser populations exposed people to the infection. Around 1900, the disease caused one in every five deaths. Between 1901 and 1950 180 000 people died of tuberculosis.
Only in 1947 did effective medicines against tuberculosis come on the market. Before that time "curing" was the common treatment. The sick people were told to eat healthy food, rest, and get plenty of fresh air, by the sea or in the mountains. Gradually a number of special hospitals, sanatoriums, for tuberculosis patients were built.

In 1909, the question of special homes for tuberculosis patients in the county of Sogn og Fjordane was raised. In accordance with a recommendation from a committee, the "amtsutvalet" (aldermen) of the county council decided to build four such homes, two in the Sogn district, one in Nordfjord, and one in Sunnfjord. Askvoll was chosen as the location for the Sunnfjord home. The building was started soon, and was finished in 1913. It turned out, however, that the communication between the builder and the building committee, where doctors also were members, had failed. There were no rest hall or assembly room, and the isolation between the tuberculosis patients and other patients was defective. Therefore, much extra work had to be done before the building could serve its purpose.

Life at an institution

The rest hall at Ask was called "Kuren" (the Cure), being a separate building with a slanting roof and an opening toward the south. There the patients rested in the open to get sunshine and fresh air. They also had an activity room in the basement, where they made baskets, etc., which were sold in the neighbourhood. The sanatorium kept poultry and had a rowboat, so the patients could catch fish. Milk was bought at the nearest farms. The municipal doctor at Askvoll came on regular visits. For operations the patients were sent to the sanatorium at Luster in Sogn. In addition to tuberculosis, other diseases were also treated at the sanatorium.

From sanatorium to nursing home

Owing to the effective medicines after the Second World War, the need for special sanatoriums for tuberculosis patients subsided. In 1954, the county closed the sanatorium at Ask. The municipality of Askvoll took over the buildings and used it as a municipal nursing home until 1977. Since then the main building has been rented to families.

Ask seen from the bay of Olsetvikane. The white building on the waterfront to the left in the picture is the nursing home.
Owner: Dagmar Ask. - Date: Ukjend. - Photographer: Ukjend.
Dagmar Ask.
Ukjend.
Ukjend.

The nursing home at Ask seen from the east. The white house is the main building, while the "Kuren" (the Cure) with a slanting roof can be seen in front.
Owner: Dagmar Ask. - Date: Ukjend. - Photographer: Ukjend.
Dagmar Ask.
Ukjend.
Ukjend.

The sanatorium at Ask with the pavilion, "Kuren" (the Cure), where the patients were treated in the open air. This part was built some years after the main building was finished. The woman to the right is Helga Seljebakke.
Owner: Fylkesarkivet, SFFf-95108.0006. - Date: Ukjend. - Photographer: Ukjend.
Fylkesarkivet, SFFf-95108.0006.
Ukjend.
Ukjend.

Two nurses, Maria Olset, to the left, and Dagmar Ask, the others are patients. The person in the middle has the surname of Buarøy and is dressed up, so this must have been a party.
Owner: Dagmar Ask. - Date: 1940. - Photographer: Ukjend.
Dagmar Ask.
1940.
Ukjend.

Alf Tronstad from Bergen did not suffer from tuberculosis; he was a disabled patient at the sanatorium at Ask.
Owner: Dagmar Ask. - Date: Ukjend. - Photographer: Ukjend.
Dagmar Ask.
Ukjend.
Ukjend.