Stigen is located on the western side of the Aurlandsfjord, about 200 metres southeast of Beitelen and the entrance to the Nærøyfjord. The farm is located about 360 metres above sea level with a steep climb up from the fjord. There are several flat areas and ledges with good topsoil. The farm is surrounded by the fjord to the east, the gully of Koldegjelet to the south, and the mountain ridge between Beitelen and Stiganosi to the west. People on these two farms can make a relatively decent living there. 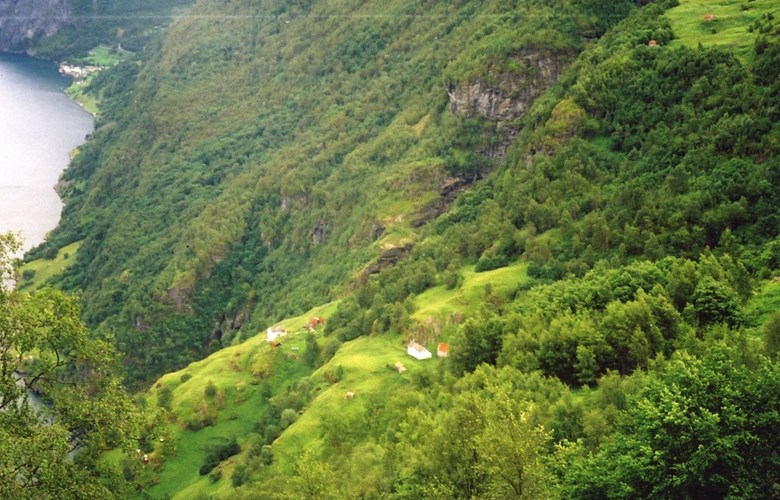 The two farms at Stigen seen from the northwest. The village of Undredal can be seen below in the background. The summer farm of Fristølen is located in the top right corner.

Stigen was cleared once more after the ravages of the Black Death from about 1600. In 1666, the two farmers had in all 12 cattle, and they harvested 6 ½ barrels of grain. The farm was most likely operated before the Black Death in 1349/1350, but there was probably only one holding. In the 250 years following the Black Death, the place became overgrown with forest and thicket, and it must surely have meant a lot of hard work to clear the farm once more with simple tools such as axe, saw and iron lever.

The farm faces east with much morning sun, and, consequently, the yields were much better there than for example at Undredal and at Hjøllo. As early as about 1650, the farm was separated into two holdings, the upper and lower Stigen. The farmyards are located about 200 metres apart. In the 17th century, the holdings changed owners a number of times, probably because they had difficulties paying taxes and property tax. 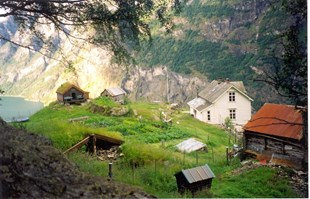 Just after 1700, the farmers were allowed to buy their farms, thus avoiding the heavy burden of the property tax. By and by, new land was cleared and cultivated, and the number of animals and the yield increased. In 1845, there were two families counting 19 persons on the farm. They harvested 28 barrels of grain and 60 barrels of potatoes, and they had 36 cattle and 34 sheep and goats. Both holdings had a horse. In the 1860s, they had about six acres of cultivated land and 24 acres of infields. About one quarter of the fodder for the animals came from the outfields, and this is quite low compared to other farms in Aurland.

The steep road up to the farm

The road up to the farm is located on a barren mountainside and it is both steep and narrow. Down by the fjord there was formerly a section of the road that was hard to pass. At this point a solid ladder - or a kind of staircase - was used, enabling even animals to pass. In the late 19th century, some rock was blasted, which made it much easier to pass this point. The farm name is probably linked to the road leading up to the farm - the Old-Norse word stígr (meaning path), or to the ladder they used - the Old-Norse word ordet stigi (meaning ladder). About 1900, an aerial cableway was made down to the fjord, which meant that they no longer had to carry all things up to the farm. 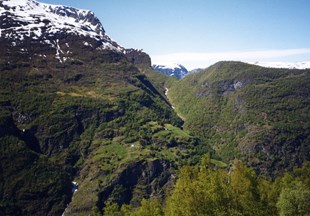 Due south of the farm there is a big gully called Koldegjelet. From time to time, a big snow avalanche called "Koldao" tumbles down into and down the gully. It starts high up in the mountainside, sometimes ending up out on the fjord. This avalanche creates an enormous gust of wind, and it may knock people and animals off their feet. On a winter's day in 1884, a huge avalanche broke loose. Jørgen Stegen and his sister Hansina were then out on the fjord in a boat. The boat capsized and both drowned. Their mother had been a widow since 1874, and she got problems running the farm. After some years, she moved in with relatives at Styvi in the Nærøyfjord.

Farming at Stigen came to an end in the early 1960s. In the last few years, they had their animals at Undredal in the winter months and ran the farm at Stigen in summer. In 1992, Dee Cunningham from the USA bought one of the holdings at Stigen. He and his co-habitant restored old houses, built new ones, and in other ways prepared the place for tourism. Today Stigen is a popular destination and it is also possible to stay overnight there.