The high farm of Sinjarheim in the valley of Aurlandsdalen

In the valley of Aurlandsdalen there are many deserted farms, and Sinjarhiem is one of these. The farm has a high location on a hill with gorges, canyons and waterfalls on all sides. In spite of the dramatic countryside people have made a living there for centuries. The farm was deserted in 1922 and decay gradually set in. In 1988, however, the buildings at Sinjarheim were restored by the Society for the Preservation of Norwegian Ancient Monuments and the farm is now used as a mountain farm by the Sogn Agricultural and Horticultural College in Aurland. 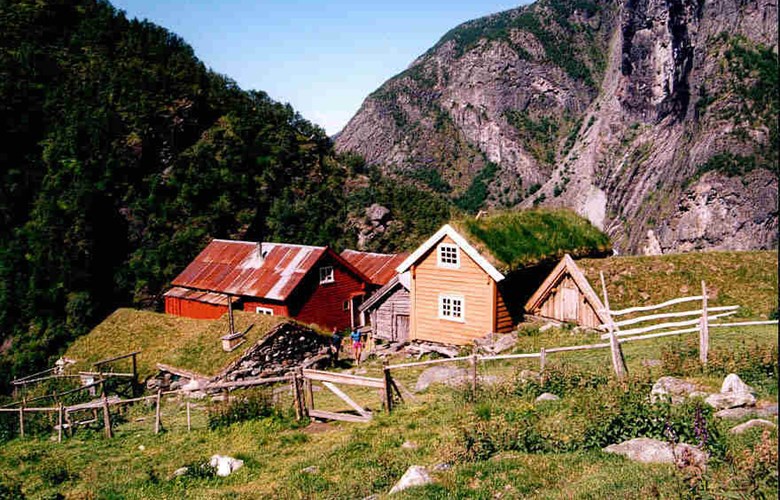 The farmyard at Sinjarheim is located at about 600 metres above sea level. The farmyard consists of six buildings and a small drying shed just behind it.

In the municipality of Aurland there used to be many high farms. Many of these have been deserted a long time ago, but people still live on some of them. In the valley of Aurlandsdalen we find many of these deserted farms. At some distance up from Vassbygdi, at an altitude of about 600 metres above sea level, the high farm of Sinjarheim is located, and this was the last of the farms in the valley of Aurlandsdalen to be deserted in 1922. The farmyard consists of a cluster of six houses besides a small drying shed for grain behind the houses. The Sinjarheim farmyard location is safe from avalanches. All the buildings, with the exception of the main building and the house for the retired farmer and his wife, are built of material found on the premises. The main building is said to have been erected about 1830 of timber that was transported by horse across the mountains from the valley of Nordheimsdalen (the mountain farm area of the Breidsnes farm far out along the Aurlandsfjord). The barn and the cowshed are mostly built of rock, and the cowshed and the "eldhus" (a house used mostly for baking and laundry) are partly dug into the ground. This gives these buildings an almost prehistoric impression. Remnants of older buildings have not been found there. 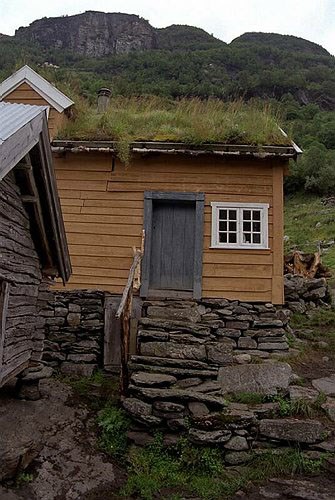 A deserted farm after the Black Death

People are said to have lived at Sinjarheim even before the Black Death (there is a reference to the farm in 1212), but that the farm was deserted from the Black Death until about 1600. Then we know for certain that people lived there. The basis of existence for the farm in the old days was just as much hunting for reindeer and other game as farming itself. As the farm is located high up on the northeast mountainside of the valley, the growth season is very short. It happened that the grain had not ripened before the frost came. If this took place several years in a row, it could be hard to manage through the long winters.
In 1869, the infield was measured to about three acres. It was possible to get a good harvest on this cultivated area, but it meant hard work. That year they sowed four barrels of grain and harvested 12. Three or four barrels of potatoes were put in the ground and returned 12. They harvested 12 000 kilograms of hay from the outlying fields and 18 000 from the infield, in addition to 500 bundles of foliage (for fodder). On the farm they had 12 cows, four calves, 18 sheep and one horse.
In the 1860s, the crag of Sinjarheimsgalden was blasted to make it possible for packhorses and animals to negotiate this section. Before, they were forced to take long detours by way of Almabrui and up to Vetlestølen, then on to Teigen and Bridlebrui. Another alternative was to go by way of Stondalen and up the mountainside to Hovdungo and further to Teigen.

The last people on the farm

The first person to have lived there that we know of was Per who is referred to in 1611. Since that year, people have lived on the farm until 1922 when they moved down to the village of Vassbygdi.
The 1900 census refers to two households with 13 persons in all. Farmer Mikkel Ellingson Sønnerheim, born 1842, lived with his wife Ingeborg Sjursdotter, born 1841, and four of their children. The household also comprised Elling Bottolvson Stene and Ivar Andersson Veum, as well as Mikkel Knutson Sønnerheim. Five of Mikkel and Ingerborg's 13 children had then already emigrated to America.
In the other household lived the crofter Ingebrigt Jonassen Rinde, born 1873, and his wife Sigrid Mikkelsdotter Sønnerheim, born 1877, and their two daughters. Sigrid was daughter of the farmer, Mikkel Sønnerheim.
These two were the last households at Sinjarheim. After they moved down to Vassbygdi, the farm was used as a mountain farm until 1964.

The valley of Aurlandsdalen is a well-known and popular area for hikers. In this valley hikers can get a very special experience in a dramatic countryside with deserted farms, summer farms, culture fields, trails for packhorses and hikers. The whole valley, and the farm of Sinjarheim in particular, is like a cultural monument to subsistence farming in Norway.
In the late 1980s, a comprehensive voluntary work was started in the valley of Aurlandsdalen. The long-term objective was to restore a wide selection of buildings and cultivated fields in the valley to preserve an important cultural heritage, enhance the experience of the landscape, and form the basis for a more versatile use of the valley.

In 1987, the house built for the retired people at Sinjarheim was on the point of collapsing. The foundation wall under the northern part of the house had fallen apart. The barn was a ruin without any roof. The cowshed roof with its gable facing the valley was also about to collapse. The following year, voluntary work was started to restore the houses on the farm. The project was supported financially by the Aurland municipality, the county authorities, "Oslo Energi", and the military authorities, besides private contributions. A total of 20 volunteers started up the restoration work, and this work has been going on every year since then. Those who take part in this restoration effort look upon the work as a holiday activity. The Society for the Preservation of Norwegian Ancient Monuments has assumed the responsibility for restoring the old houses on the farm so the farmyard worthy of protection is saved from further decay. In 1999, 26 man-weeks were carried out in the valley. The previous year, the voluntary work group received the "Maihaugprisen" award for their efforts in the restoration of Sinjarheim.

In 1992, the Sogn Agricultural and Horticultural College joined the restoration work at Sinjarheim. The landscape around the farmhouses was becoming overgrown with northern wolfsbane, birch and alder. In order to retain an open landscape the idea was put forward to use the farm as a summer mountain farm. Since 1993, the school has used the farm about three weeks every summer for practice in mountain farming. Three cows and 65 goats are then milked on the farm. The milk is used to make white and brown cheese which is then transported down to the village by means of packhorses. 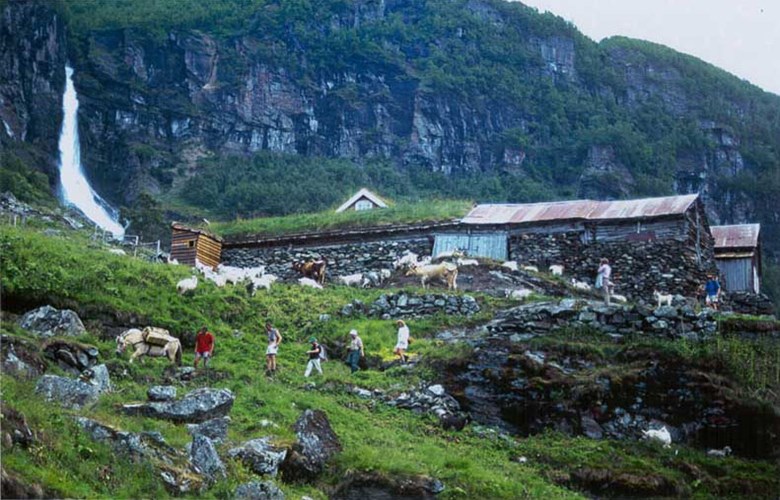 "Aurlandsdalen Kulturlandskap" is a co-operative forum between the proprietors of the valley and those who carry out the voluntary preservation work. This has been a vital organ to ensure the success of the preservation work. They prioritize the tasks that need to be done, make agreements and make sure that the activities in the valley are co-ordinated.
The present owner of Sinjarheim is Inge Olai Sønnerheim.

From 1993, the Sogn Agricultural and Horticultural College at Aurland has used Sinjarheim to run courses in mountain farming. They have had three milk cows and 65 goats. The produced cheese has been transported down to the village by means of packhorses.
Owner: Aurland kulturlandskap. - Date: Ca. 2000. - Photographer: Morten Clemetsen.
Aurland kulturlandskap.
Ca. 2000.
Morten Clemetsen.

The main residence at Sinjarheim is said to have been built about 1830 with timber transported across the mountains from the valley of Nordheimsdalen. In 1878, some rebuilding was carried out on the farmhouses. The living room was then decorated with figures.
Owner: Kjell Røysum. - Date: 05.08.2001. - Photographer: Kjell Røysum.
Kjell Røysum.
05.08.2001.
Kjell Røysum.

In 1987, the Bergen branch of the Society for the Preservation of Norwegian Ancient Monuments took the initiative to start the restoration work of the buildings at Sinjarheim. At that time the buildings were on the point of collapsing. Since that year the restoration work has been going on every summer with considerable efforts from many volunteers.
Owner: Fortidsminnesforeningen. - Date: Ca. 2000. - Photographer: Fortidminnesforeningen.
Fortidsminnesforeningen.
Ca. 2000.
Fortidminnesforeningen.
resources:
Gjerløw, Anna og Ohnstad, Anders: Ættebok for Aurland, band II. Aurland Sogelag. Bergen 1964.
Sogn jord- og hagebruksskule: http://www.sogn-j-h.vgs.no - Sinjarheim.
Velkomen til Aurland og Flåm: http://www.aurland.com - Sinjarheim.
Velkomen til Aurland og Flåm: http://www.aurland.com - Vassbygdi.
Aurland Naturverkstad: http://www.aurland-naturverkstad.no/ - Aurlandsdalen kulturlandskap.