On 17 May 2000, a memorial stone at the Davik church commemorating three men who lost their lives during the Second World War. Two of them died on a joint British/Norwegian expedition to Spitsbergen in May 1942. The third man died when the ship he was on sank after being torpedoed en route from England to Oslo. It was the Davik "sokn" (sub-parish) who erected the stone. 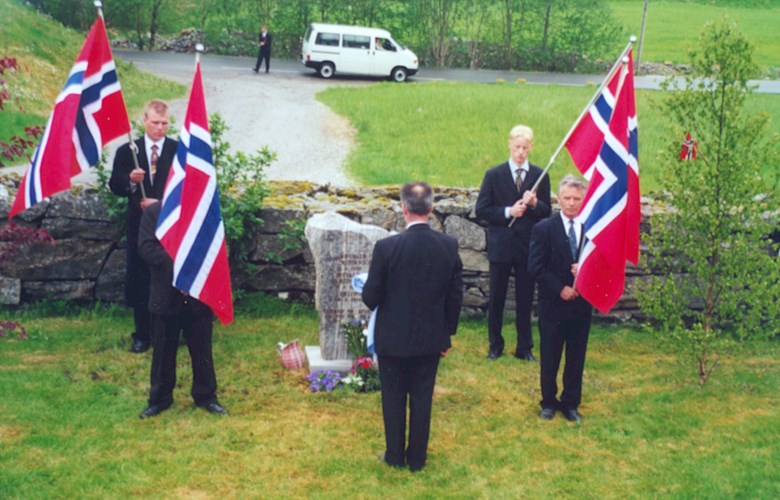 The memorial stone for the three youths from the Davik "sokn" who lost their lives in the Second World War was unveiled on 17 May 2000. The guard of honour from left to right: Steffen Hamre, Rune Hausle (partly hidden), Marius Lien and Magnus Nybø. Roar Førde gave the unveiling speech.

Biographies in the book "Våre Falne"

HØILAND, SIGVALD KRISTIAN, storage worker, Davik. Born 9 February 1923 at Davik, son of Marthinus P. Høiland, born 1875 at Davik and Oline née Bøen 1886, same place. Worked at the storage facilities of "Store Norske Spitsbergen Kulkompani A/S (Ltd.) at Spitsbergen. Came to Scotland from Spitzbergen in September 1941 and served in the Army. Lost his life on 14 May 1942 during an expedition to Spitsbergen when the ship was attacked by German planes.

BØEN, INGVALD ELIAS, steward, Davik. Born 31 August 1903 at Davik, son of Kristen P. Bøen, born 1859 at Davik, died 1905, and Ane Iversdatter née Dombestein, born 1859 at Davik. Married 1934 at Davik to Marie Kristofine Svendsen, born 1909 at Haram. 1 child. Steward school. In charge of provisions at Store Norske Spitsbergen Kulkompani A/S at Spitzbergen. Came to England from Spitsbergen in September 1941 and joined the Army. Lost his life on 14 May 1942 during an expedition from England when the ship was attacked by German planes.

MYRLIE, ERLING, cook, Davik. Born 20 March 1916 in Oslo, son of Elise Myrlie. Was cook on SS Miranda, and lost his life on 20 January 1940 when the ship sank after an explosion, about 30 nautical miles off Peterhead in Scotland en route from Blyth to Oslo.

The Germans stayed away from Spitsbergen after the invasion and occupation of Norway in April/May 1940, and the communication lines to mainland Norway were not disrupted much. However, in August 1941, there was a dramatic turn of events. In order to prevent Germany from making use of the coal production, Spitsbergen was evacuated. The Russian contingency was transported to Murmansk, and the Norwegians came to England (including the two youths Bøen and Høiland from Davik). At the evacuation they set fire to an enormous coal storage facility and destroyed vital production equipment.

The Germans soon realized what had happened, and exploited the situation. They improved a landing stripe and established a couple of weather stations. They also sent a group of experts to assess the coalmines, but they were short of people and did not have enough equipment and provisions for spending the winter there.

The British quickly understood that the evacuation had been a mistake, and in the spring of 1942, an expedition counting 82 men were sent on two ships, the icebreaker "Isbjørn" and the sealer "Selis" to "occupy" the island and keep an eye on the mining facilities. The expedition - called Fritham - arrived on 13 May. The coastal waters were covered with ice, and while "Isbjørn" was breaking through the last patches of ice, the ships were attacked by four long-range bombers from Banak in Finnmark. Both ships went down and 14 men lost their lives, including Høiland and Bøen. The rest managed to get ashore and were saved when help eventually arrived.

The leader of the Fritham expedition, Einar Sverdrup, managing director of "Store Norske Spitsbergen Kulkompani A/S", was born in Solund. He was son of Johan Edvard Sverdrup who was vicar in Solund in the years 1893-1898. Sverdrup was one of the 14 who lost his life in the airplane attack, and in the book "Våre Falne" the following is written about him:

SVERDRUP, EINAR, managing director, Bærum. Born 18 December 1895 in Solund, son of professor Johan Edvard Sverdrup, born 1861 at Balestrand, and Agnes née Vollan, born 1866 at Norderhov. Married 1923 in Trondheim to Dagny Lorck, born 1899. 3 children. Norwegian War College, Mining engineer N.T.H., studies in the U.S.A. Was managing director of "Store Norske Spitsbergen Kulkompani A/S", and came to England in September 1941 when Spitsbergen was evacuated. He immediately started the work of organizing an expedition that would recapture Spitsbergen and protect the mining facilities. Became leader of the expedition and was given the rank of lieutenant colonel. Died on 13 May 1942 when one of the expedition ships, the icebreaker "Isbjørn", sank after an attack by German planes in the Grønfjord. War Cross. Article in Teknisk Ukeblad # 17, 1945."

Erling Myrlie was one of the few Norwegians who died because of war actions at sea before Norway was invaded on 9 April 1940. The ship he was on, SS "Miranda" of 2 100 TDW, belonging to the shipping company J. M. Johannesen, was en route from Blyth on the English east coast to Oslo when it was torpedoed by a German submarine. Out of a crew of 17 only three survived and were taken in to Kirkwall on Shetland.