The Undredal farm is located on the western side of the Aurlandsfjord, five kilometres south of the entrance to the Nærøyfjord. The farm property covers and area of about 85 square kilometres, stretching southwest on either side of the valley of Undredalsdalen all the way the boundary with the municipality of Voss. The farm property also includes the mountainside north of the farmyard on the western side of the fjord, to the gully of Koldegjelet, as well as the mountainside on the east side of the fjord, to the boundaries of the farms of Kappadal and Nedbergo in the north. 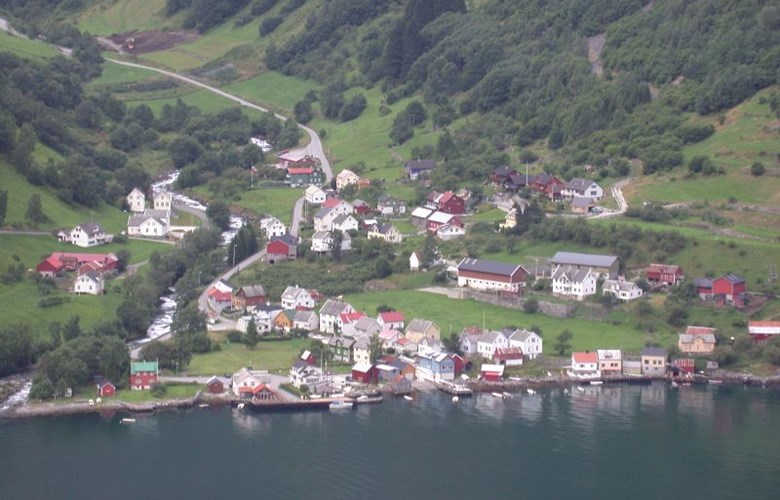 View of Undredal seen from the eastern side of the fjord. Down by the fjord, in the centre of the picture, are several properties not linked to farming. The farmhouses are located further up on either side of the river.

An old farm
Undredal is an old farm, settled at the time of the birth of Christ or even further back in time. The farm is centrally located down by the fjord, and there are natural resources in the form of soil, forest and mountain areas. In the High Middle Ages (1000-1300 AD) about 100 persons may have lived at Undredal. At the mountain farm of Melhus grain was once cultivated, and at Langhuso, six kilometres up the valley, there are remnants of a foundation wall, dating back to the 13th century. At this place there may have been a permanent settlement for some time. As early as in the 12th century there was chapel at Undredal, and later on a church was built.

Population increase and division of farms
Since the Black Death in 1349/50 there has been continuous settlement on the farm, and in 1522 there were two holdings. This would indicate that 14-18 persons lived there. In the mid-17th century there were four holdings. These were divided from time to time, which meant that in 1845 there were 10 holdings and about 20 crofts, with 187 people in all. The holdings were rather small with an average cultivated area of about seven-eight acres. In 1900 there were 12 holdings, some smaller holdings and 155 persons on the farm.

The production
In 1723 the harvest was 60 barrels of mixed grains, and the farm had 96 cattle and 67 sheep and goats. The combination of husbandry and cultivation was ideal because the valuable manure was used on the fields. In 1845 the total harvest for Undredal, on the holdings and the crofts, was 42 barrels of barley and 420 barrels of potatoes, and they had 192 cattle, 356 sheep and 159 goats. The most important agricultural produce was milk, used in the making of cheese and butter, porridge and other dishes.

Cultivated fields, outlying fields and mountain farms
In the 1860s about ¾ of the infields were cultivated, mostly to grow grains. In the outlying fields, on both sides of the fjord and further up the valley of Undredalsdalen, animals grazed in the spring and in the autumn. The farmers cut hay wherever possible and also dried leaves and branches for fodder. Firewood was also cut in the forest. About 1850, people carried bundles of dried foliage on their backs down the steep hillsides. Later on steel wires were used, some up to 400 metres in length, and these aerial cables made the transportation of hay, foliage and firewood much easier.
In the second half of May people moved the animals two-three kilometres up the valley to the spring mountain farm of Melhus. Four-five weeks later they moved further up to Langhuso, three-four kilometres south of Melhus. In August the last stage took them up to the high mountain farms of Jonadalen, Nisedalen or Grindafletene. These high mountain farms, with the exception of Grindafletene, were used until about 1950. When the pastures there were exploited, people and animals returned to Langhuso, and on 28 September - Michaelmas - they returned down to the home farm.

After 1900
The cultivation of barley came to an end after 1900, and the goat became the dominating animal. Some of the crofters bought the ground they lived on, supplemented by some extra land. These smallholders combined farming with other occupations, and working on the railroad was quite common. The mountain farms of Melhus and Langhuso were used in the traditional way until about 2000. In 2002, three farmers built a new cheese factory at Melhus, and white and brown goat cheese was produced and stored there. In 1986 a new road was built past Langhuso and through a tunnel to Flåm, thus breaking the road isolation for the people of Undredal. Today five farms are in operation, and the population is about 85.