Memorial stone commemorating those who lost their lives during the Second World War from Selje.

18 persons from Selje lost their lives as a consequence of the Second World War. Many of these were seamen. The people of Selje erected the memorial in 1947, and between six and seven hundred people were present at the unveiling ceremony. 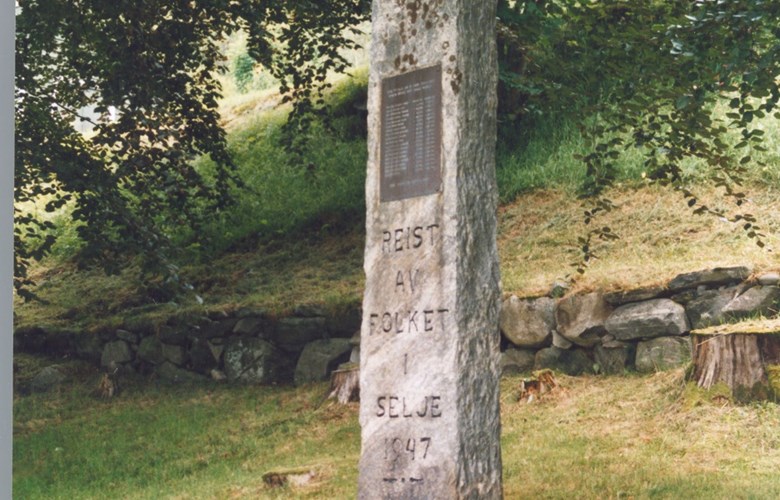 The memorial stone at Selje church commemorating the 18 men from Selje who lost their lives as a consequence of the Second World War. The stone is about four metres high, and at the bottom the stone measures 72 by 30 centimetres. The copper plate with the names measures 45 by 62 centimetres.

Highly visible from the village

The memorial is a cut greyish stone with a copper plate. Its location on the churchyard above the road at Selje church is highly visible from the village. At the top of the copper plate is written:
AS A CONSEQUENCE OF THE WAR 1939-1945 * THESE PERSONS FROM THE MUNICIPALITY OF SELJE LOST THEIR LIVES
Then follow the 18 names with dates of birth and death, and below the names is the following inscription:
FOR HOME AND COUNTRY
In the stone below the plate the following text is carved into the rock: ERECTED * BY * THE PEOPLE * OF * SELJE * 1947

The stone was unveiled on the day of repentance, 31 October, 1947, attended by six to seven hundred persons from the whole municipality of Selje. The vicar Tungesvik gave the unveiling speech. He paid particular attention to the seamen in his speech - the toil, the dangers they were exposed to, and the courage they showed.
At the end of the speech Tungesvik said: - The stone is erected because the people of Selje want to honour the memory of those who lost their lives for our people and country, and it will help us to keep the memory of those men alive. But the memorial stone will also be a reminder to future generations to do their duties whenever needed, the way these men did their duties.

Several wreaths were laid down at the memorial. The Selje male chorus and the Selje brass band participated at the ceremony, which was concluded with the hymn ''Når mi livssol sig i hav.''

STAVE, ROMANDUS, engineer, Selje. Born 10 September, 1915 at Selje, son of Peder Jetmundsen Stave, born 1880, and Ragna Rasmusdatter née Stave, born 1882, both at Selje. Lost his life in Hull, England, by drowning on 3 November, 1939 because the city was blacked out.

HOVE, SIGVALD EINAR, carpenter, Selje. Born 3 March, 1896 at Selje, son of Knut Tollefsen Hove, born 1860 at Selje, and Eline Gjertsdatter née Dalseth, born 1870 at Eid. Worked on MT Buesten, and died when the ship went down in the English Channel on 9 April, 1941, on her way from Dartmouth to Southampton.

INGEBRIGTSEN, OLAF, carpenter, Selje. Born 24 December, 1898 at Selje, son of Ingebrigt Johannesen, born 1844, and Janikke Olsdatter née Refsnes, born 1852. Worked as a carpenter on MT Vinga, and died on 15 September, 1941, during an air raid on the ship on her way between England and America. Buried at Selje.
Note: On the memorial stone his family name is Årsheim.

TORHEIM, RAGNVALD ANTONI, fishing boat skipper, Selje. Born 6 August, 1912 at Davik, son of Mons Torheim, born 1882 same place, and Lina née Teige, born 1885 at Herøy, Sunnmøre. Married 1936 at Rovde, Sunnmøre, to Emma, born 1907. One child. Navigation course. Stand-by assistant in the lighthouse service and fishing boat skipper. Died during the raid on Måløy on 27 December, 1941, when he was killed by a shell. Buried at Nord-Vågsøy church. His brother Arthur Henry died in 1943.

ELTVIK, PETTER HJALMAR, cook, Selje. Born 10 April, 1917 at Selje, son of Mathias Larsen Eltvik, born 1880 at Selje, and Sevrine, born 1878 at Selje. Was a cook on MT Kongsgaard which was torpedoed six nautical miles west of the northern tip of Curaçao on 21 February, 1942, on her way from Puerto de la Cruz to Aruba.

TEIGEN, ALFRED OLAF DANKERT, seaman, Selje. Born 7 November, 1914 at Selje, son of Daniel Antonsen Otnes, born 1885 at Selje, and Anna Teigen, born 1887 same place. Went to sea for the first time in 1934 as a messboy. Died on 29 December, 1942, when the SS Ingerfem was torpedoed in the North Atlantic, in a convoy from Loch Ewe to Halifax. 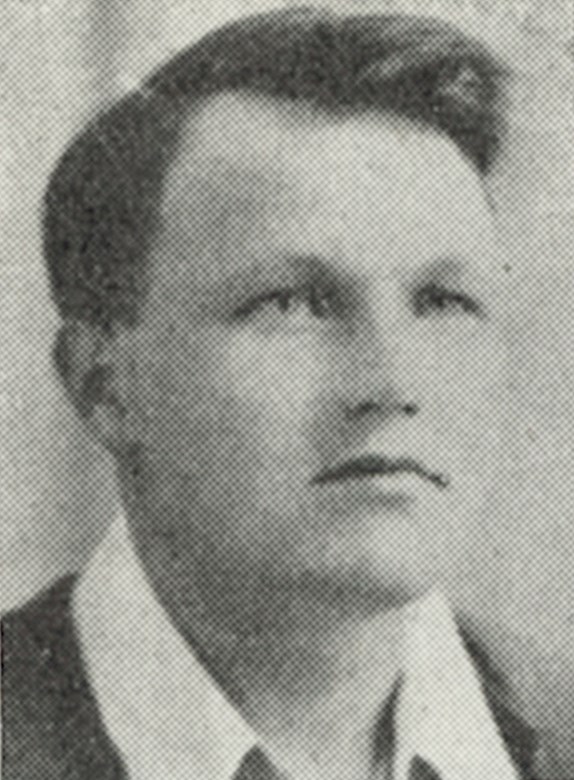 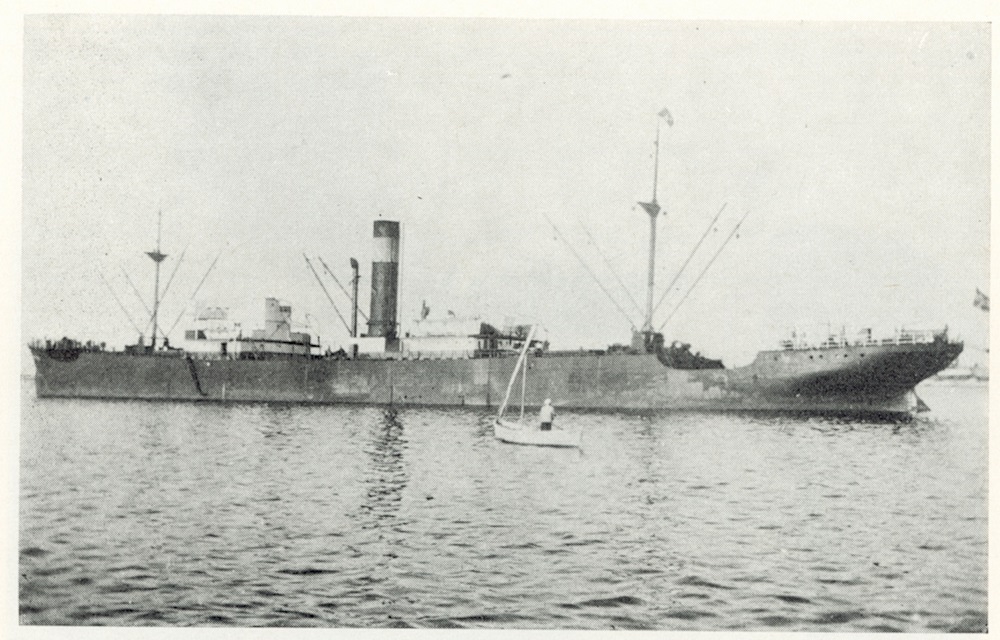 SANDE, HJALMAR SIMON KARLOT, seaman, Selje. Born 6 March, 1915 at Selje, son of farmer Jakob Jakobsen Sande, born 1872, and Sara Olsdatter née Sande, born 1880, both at Selje. Sailed for the allied forces as a seaman on MS India. The ship left Talara, Peru on 3 September, 1943, and disappeared on the way to Sydney, Australia.

KJØDE, ARNE PETTERSEN, engineer, Selje. Born 9 May, 1908 at Selje, son of Petter Pedersen Kjøde, born 1868 at Selje, and Kristiane née Andersdatter, born 1863 same place. Sailed in foreign trade before the war. During the war he sailed on SS Felix, and died on 11 February, 1944 when his ship went down at Folla. Buried in Namsos.

STOKKEVÅG, KARSTEN MATHIAS, motorboat pilot, Selje. Born 17 May, 1921 at Selje, son of Laurits Kristensen Stokkevåg, born 1869 same place and Anna Mathiasdatter née Hestenes, born 1885 at Gloppen. Evening school, correspondence course. Was a passenger on SS Irma, and died when the ship sank off Hustadvika after two explosions on her way from Bergen to Kristiansund.

SANDVIK, PEDER, farmer and whaler, Selje. Born 8 June, 1879 at Selje, son of farmer Peder Johnsen Sandvik, born 1836, and Synnøve Torbjørnsdatter, born 1835. Married 1903 at Selje to Paula Eltvik, born 1875 same place. Two children. During the war he was a fisherman in Scotland and later on a guard at a naval depot in London. In 1941, he took part in a boat crossing to the Norwegian coast and put ashore two men and returned with refugees to Britain. Died on 7 March, 1945 during an air raid on London. Buried at Leikanger.

DRAGE, REIDAR JONN, farm worker, Selje. Born 21 September, 1924 at Selje, son of Reinhardt Drage, born 1882, and Oline née Tungevåg, born 1882, both at Selje. After the liberation he was conscripted to do military service in the coastal artillery, and died on 15 April, 1946 in an explosion while sinking German ammunition at Tangane at Rugsund. Buried at Leikanger, Stad.

We do not have any pictures from the unveiling ceremony, can anyone help us?

Olaf Ingebrigtsen Årsheim (1898-1941) was a carpenter on MT Vinga which was bombed on 15 September, 1941. The ship was in convoy # OS 6 on her way from America, but was left astern and was therefore without any protection. Two bombs hit amidships, killing eight men. The survivors were taken onboard the destroyer Campeltown. Vinga managed to stay afloat, and four of the crew volunteered to get onboard to attach a towline. They eventually managed to get Vinga into port at Rothesay, New Brunswick, Canada, on 20 September.
Owner: I <i>Våre falne.</i> - Date: Ukjent. - Photographer: Ukjent.
I <i>Våre falne.</i>
Ukjent.
Ukjent.

Olaf Teigen was a crew member on SS Ingerfem of Bergen. The ship was in a convoy out of Loch Ewe, Skottland to Halifax, Canada, on Christmas Eve, 1942. After three days they got some engine trouble and were left astern. On the evening of 29 December, the ship was torpedoed by a German submarine and sank after only five minutes. Many of the crew managed to get onboard two lifeboats, but only one man was saved, the gunner Ole Næss. He was picked up about two weeks later, on 11 January, more dead than alive. He could later give an account of the drama in the lifeboat after the ship was torpedoed.
Owner: I <i>Nortraships flåte.</i> - Date: Ukjend. - Photographer: Ukjend.
I <i>Nortraships flåte.</i>
Ukjend.
Ukjend.
resources:
Våre falne. Oslo 1948.
Fjordabladet. 07.11.1947. Nordfjordeid.
Fjordenes Tidende. November 1947, Måløy.