In the churchyard at Askvoll, there is a memorial stone with 16 names, - all from the municipality of Askvoll, who lost their lives during the war 1940-1945. The memorial was unveiled on 17 May 1956.

The memorial stone for fallen soldiers in the war 1940-1945 at the Askvoll church, unveiled on 17 May 1956. This was ten years after the first initiative to erect a memorial had been taken. In 1947, the newspaper Firda reported that it had been decided to erect the stone in the garden in front of the municipal administration building, and that rock from Askvoll would be used. But time passed, and there was no memorial. In 1955, a notice signed S. Klokkernes drew the attention of people to the memorial stone, pointing at the municipality and the mayor. ".. this is a point of honour for the municipality, and this cause must not be shelved!" 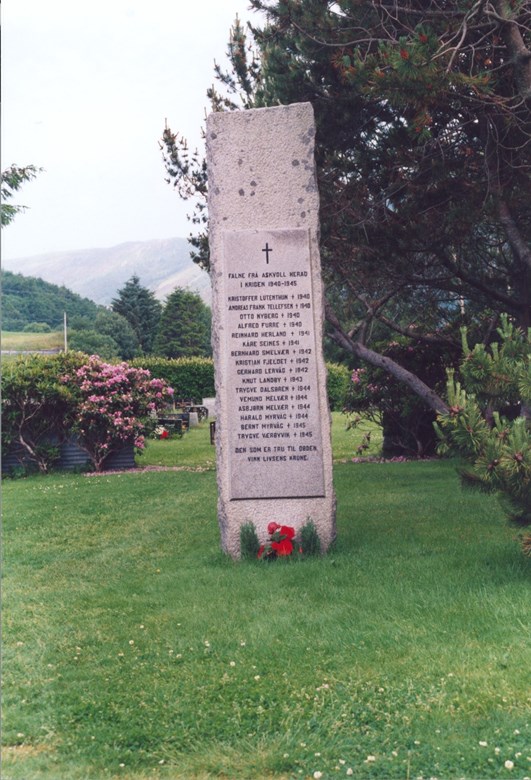 The memorial was unveiled on 17 May 1956, in "the foulest of weather." The ceremony was opened with Landkjenning [Grieg, Op. 41], played by the local brass band, and the audience sang the national anthem. The chairman of the memorial stone committee, Sverre Ringstad, wished everyone welcome and called on the admiral Hostvedt to give the unveiling speech. After the unveiling, Ringstad handed the memorial over to the municipality, represented by the mayor Flokenes. He said that "when none of us live to tell the word [..], the stone shall stand and give this simple, but mighty message to future generations about sacrifice and love of country."

One of the 16 fallen was a young boy. The others were youngsters and men in their prime. Eight were lost in Allied shipping, one was a sailor in Norwegian waters, three perished in Allied naval war service, and three died in German captivity, having been arrested for resistance activity. They are all referred to with short biographies and pictures in the book Våre Falne (our fallen), which the Norwegian state published in 1948. Below they are presented in the same order as on the memorial.

"LUTHENTHUN, KRISTOFFER ANDREAS, captain, Askvoll. Born 30 December 1899 at Askvoll, son of boat builder Kristoffer Sørensen Tviberg, born 1873 at Sandøy, died 1899, and Anne Petrine née Luthenthun, born 1873 at Askvoll. Married 1930 in Bergen to Ragna Karine Vilnes, born 1899 at Askvoll. Two children. Mate training school, captain training school. Signed on at the age of sixteen. Was captain of the SS Hop leaving Bergen on 3 February 1940, and disappeared without a trace on her way to Middlesbrough.

"TELLEFSEN, ANDREAS FRANK, steward, Askvoll. Born 7 October 1899 at Vestre Moland, son of Jørgen Tellefsen and Anna née Kalvild. Married 1924 at Askvoll to Gunhild Petersdatter Ask, born 1896 same place. Three children. Was steward of the SS Dokka, and was lost on 17 October 1940 when the ship was sunk by German U-boat, en route from Barry-Docks to Quebec."

"NYBERG, OTTO JOHANNES, ordinary seaman, Askvoll. Born 22 December 1917 at Hosanger, son of Anton Nyberg and Josefine née Bernes. Married 1938 at Askvoll to Petra Stafsnes. One child. Was on board the MT Fosna in Allied service until he died on 18 October 1940 in accident in Auckland. Buried same place."

"FURRE, ALFRED EMIL, ship timberman, Askvoll. Born 29 May 1903 in Bergen, son of postman Peder Johan Furre, born 1876 at Askvoll, and Martha née Nilsen, born 1882 at Bømlo. Married 1936 at Askvoll to Olava Kathinka Furset, born 1912 same place. Two children. Carpenter trade school. Was a ship timberman on the SS Samnanger, which left Oban in convoy and was torpedoed by German U-boat in the South Atlantic on 21 December 1940."

"HERLAND, REINHARD, fisherman, Askvoll. Born 10 June 1906 at Askvoll. Was in Allied service during the war until he drowned in Methil in Scotland on 26 March 1941.

"SEINES, KÅRE, ANTONIUS, junior seaman, Askvoll. Born 25 September 1914 at Bodin, son of Karl Seines, born 1878, and Anna née Johansen, born 1879, both at Bodin. Was before the war a fisherman. Was active in refugee assistance, and had to escape to England in August 1941. Was lost on 21 December of that year when the SS Annavore was torpedoed in the Atlantic, seven days out of Gibraltar.

"FJELDET, KRISTIAN, sailor, Askvoll. Born 28 August 1894 in Fjaler, son of Kristoffer Fjeldet, born 1855, died 1942, and Oline neé Eliasen Njøsen, born 1857, died 1944. Married in America to Nettie, born in Norfolk, the U.S.A. Was sailor in the American coastal traffic. Was lost when the SS Nordvangen disappeared between Paramaribo and Trinidad. The ship left Paramaribo on 18 February 1942, and has not been heard of since.

"LERVAAG, GERHARD JOHAN, mate, Askvoll. Born 31 July 1905 at Askvoll, son of newspaper editor David Gerhardson Lervaag, born 1862, and Astrid née Ubostad, born 1869. Training ship course, mate training school. Signed on in 1939 as a boatswain on the MS Torvanger. Later assistant mate of the MT Vardefjell, which was in Allied service. The ship ran into a strong gale in December and broke in two. The bow, where he was, went down with 12 men, on 13 December 1942." 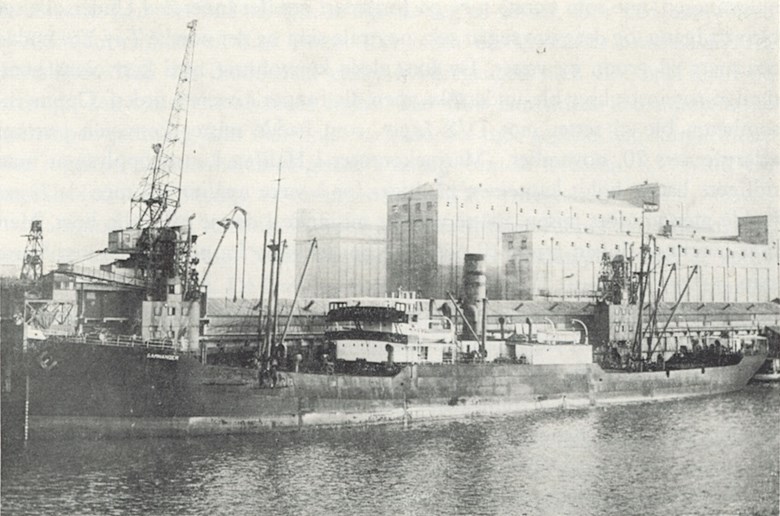 Was lost at sea

Gerhard Lervaag lost his life as an officer on board the Norwegian commercial vessel MT Vardefjell, in Allied service. The Vardefjell left Clyde, USA in convoy, for North Africa on Friday 11 December 1942, with a load of oil. The ship lost contact with the convoy. The sea was heavy, and in the evening of 13 December the ship broke in two. The bow with 12 men disappeared, while the stern kept afloat and could be manoeuvred slowly backwards by its own engine. For 13 days this half ship went backwards, and managed to get to the Faro Islands on Christmas Eve. A boat came out and picked up all on board. But Gerhard Lervaag was among the 12 in the bow.

"LANDØY, KNUT ANDREASSON, fisherman, Askvoll. Born 11 March 1896 at Askvoll, son of the fisherman Andreas Landøy, born 1859, and Anne Cecilie née Vilnes, born 1868 same place. Engine course. Was arrested by the Germans on 17 July 1942 for not having handed in his radio set. Was in various prisons in Norway until taken to Germany on 15 February 1943, to Sachsenhausen, but was later moved to another camp for some time. Came back to Sachsenhausen in bad health, and died on 29 April 1943.

"DALSØREN, TRYGVE, schoolboy, Askvoll. Born 21 July 1935 at Askvoll, son of the shop assistant Adolf Emil Thomasseon Dalsøren, born 1908 at Askvoll, and Else Marie née Pedersen, born 1907 in Bergen. Entered on 17 June 1944, together with some friends, a barbed-wire minefield, and was badly injured when a mine exploded. Died on his way to the hospital.

"MYRVÅG, BERNT, TEODORSEN, fisherman, Askvoll. Born 22 January 1921 at Askvoll, [..] Escaped from the German forced work service and went to England in the summer of 1941. Was a soldier and a paratrooper, joined the so-called "Green Devils" unit. Took part in the invasion of Belgium and the Netherlands. Fell at Walcheren on 14 January 1945. Buried at Walcheren. His brother Harald died in Germany in 1944."

"VÆRØYVIK, TRYGVE, fireman, Askvoll. Born 2 January 1922 at Askvoll, son of Torvald T. Værøyvik, born 1896 same place, and Johanne née Helgheim, born at Jølster. Was a fisherman, but went from Værlandet to England in August 1941 on a motor vessel, and joined the Norwegian Navy. Served on several boats, among them the corvette Tunsberg Castle. The vessel was blown up by mines in north Norwegian waters on 12 December 1944, but Værøyvik was rescued. Was lost on 8 May 1945, when the minesweeper N.Y.M.S. 382 was sunk in the English Channel.

The SS "Samnanger", built in 1918, belonged to the Bergen shipping company Westfal-Larsen. In November 1940, the ship was in convoy from Halifax, Canada, in ballast for Sierra Leone, West Africa. On the 29th, contact with the convoy was lost. Three days later, the "Samnanger" was attacked by a German U-Boat, first by a torpedo hit mid-ship, then by cannon fire which set the whole ship on fire. The crew all perished, 25 Norwegian, two British, two Spanish, and one Swedish. Alfred Emil Furre was ship timberman on board the "Samnanger".
Owner: I <i> Nortraships flåte.</i> - Date: Ukjend. - Photographer: Ukjend.
I <i> Nortraships flåte.</i>
Ukjend.
Ukjend.