Close to the church at Askvoll there is a three-meter-high memorial stone commemorating Bernt Askevold. Into the back is carved: "Venner paa begge sider av havet reiste dette minne (friends on both sides of the ocean erected this memorial)". Askevold emigrated to America in 1873, studied theology, and was minister of several congregations. He returned in 1922 and spent his last few years at Askvoll. 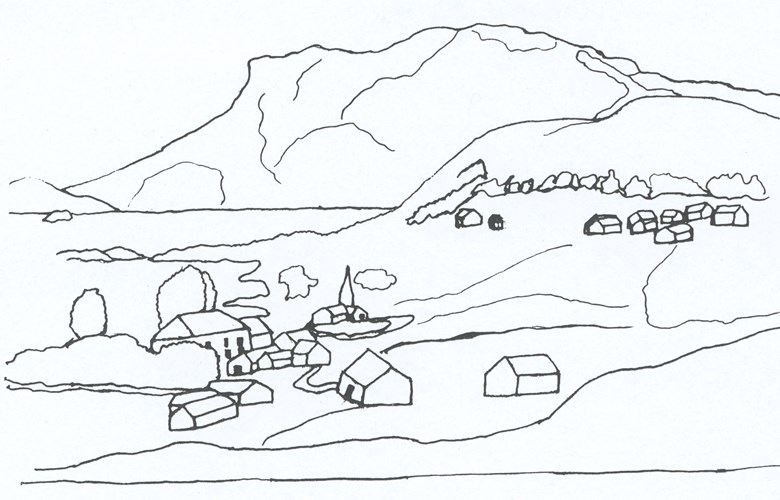 Askvoll around 1860. The drawing was made after a contemporary watercolour by Bernt Askevold. In the upper right corner are the houses of the farm of Askvoll, the upper, where Askevold was born and grew up. The yard of the vicarage is to the left of the church, with residential building, bishop's house, house for servants and tenant, storehouse, and other farm buildings. The cruciform church in the middle of the picture is the Askvoll church, which was built in 1859 and burnt down only two years later.

The memorial stone for Bernt Askevold is prismatic, 64 by 24 centimetres at the base, and 270 centimetres high. Into the front a cross has been carved, below is inserted a 54-centimetre-high, oval facial relief, and at the low end there is the inscription PASTOR * BERNT ASKEVOLD * [born] 1846 - [died] 1926
On the back is an identification of those who had the stone erected, friends on both sides of the ocean. This is regrettably quite difficult to read.
The stone was erected a short time after Askevold died, in 1928 or 1929. The relief is signed "Ambrosia Tønnesen 1928".

Bernt Askevold, born on 16 May 1846 at Askvoll, was the son of the farmer Mads Mathiasson Askevold (1798-1873) and Ingeborg Pedersdotter Askvolløyra (1809-1894). Mads Askevold was married twice. In his first marriage, to Anne Marie Stub Heiberg, the daughter of the dean Gerhard Severin Heiberg, vicar at Askvoll 1816-1825, he had three children. In his second marriage he had nine children, Bernt and his twin sister Dorthe being number 6 and 7 in the succession.

Bernt Askevold went to the obligatory primary school and was confirmed in 1861. Then he worked at the family farm for three years, and during two winters he participated in the spring herring fisheries at Kinn. In 1864 -1866, he went to Anders Høvig's private "apprentice school" at Askvoll, a school meant to help young people on their way into the teaching profession. In the autumn of 1866, he found substitute work at Kinn, and the same autumn he moved to Bømlo in Hordaland, where he was offered a permanent teaching position. He stayed there for three years, as a teacher at several schools, later in addition as a post office clerk with the shopkeeper Både. From 1869 until he emigrated in 1873, Askevold lived in Bergen. There he went to a subordinate officer academy, worked as a teacher at Laksevåg, and published his own newspaper, the "Laxevaags Avis", for a short period. He read and studied constantly on his own, and learned several languages: English, German, and French.

To America and back

In America, he was a teacher before he studied theology at Luther College, Iowa, 1880-1882. Later he was minister of 14 congregations, the last one in Brooklyn, New York, from 1917 to 1920.
Askevold was married three times in America, and his wives were all of Norwegian descent. Three children from the first marriages died, while his son Gerhard from the third grew up and stayed in America. His third wife died in 1909, and Bernt Askevold remained single after that.
Askevold visited Norway several times, in 1922 he returned for good and settled down at Askvoll. The returned pastor from America immediately became active in the congregation, he substituted for some time as a pastor, and was well-known by the people of the two parishes Vilnes og Askvoll. He died on 10 June 1926.

The vicar Lyngstad wrote the obituary in the periodical of the congregation. People from the whole parish gathered in his home at Øyra, where the vicar based his sermon on 2. Tim. 4, 6-8: "For I am now ready to be offered, and the time of my departure is at hand. I have fought a good fight, I have finished my course, I have kept the faith: Henceforth there is laid up for me a crown of righteousness, which the Lord, the righteous judge, shall give me at that day: and not to me only, but unto all them also that love his appearing. "Askevold had spoken on those same words in his last sermon for the congregation.
After the sermon, wreaths were laid from Askvoll municipality, Vilnes parish, and the Bergen branch of the Norwegian Sami mission. From the Askvoll congregation there were flowers and thanks for "the word about the cross". The vicar officiated at the burial ceremony at the grave.

A short time before Askevold died in 1926, he donated his library to Askvoll municipality. The books were later put aside in a closet and taken out only in the 1970s. The collection is now a part of the municipal library. An index has been made, and people are allowed to use the books in the library. But there is still no proper computer register available.
The library of more than 1000 titles mirrors the man who built it. Around 350 titles are on religious subjects, a great many books are on linguistics and education, and the other books are on a wide variety of subjects, such as geography, social sciences, history, etc..

In the library donation were also six large, hand-written books of memories. In the first is written on the "title page": "Notes about myself, my family, my community, and one thing and another of what I have heard and seen." All the books are written in Askevold's characteristic hand, and at the back of each book are indexes with page references.
The Askvoll culture board around 1980 published the book "Frå heimbygda. Etter Bernt Askevold sine minnebøker."(from our home community. According to Bernt Askevold's memories) Here are articles about the family, his childhood and youth, about names and historical events at Askvoll, about crime and accidents, about some vicars and parish clerks at Askvoll, "The Apprentice School" at Askvoll, etc..

A collection of letters, postcards, photos, handwritten books, and other papers which Bernt Askevold left have been ordered into a private archive (person archive), which is kept at Fylkesarkivet i Sogn og Fjordane (Sogn og Fjordane county archives). This archive contains 290 letters to or from America (letters sent to Bernt Askevold from America or Norway), etc.. They are registered in a separate America letters register.

The relief on the memorial stone was made by the artist Ambrosia Tønnesen (1859-1948) from Bergen. She also made the relief on the Anders Askevold stone at Korseberget, a short distance to the west of the churchyard.
Owner: Fylkesarkivet i Sogn og Fjordane. - Date: 2001. - Photographer: Hermund Kleppa.
Fylkesarkivet i Sogn og Fjordane.
2001.
Hermund Kleppa.

Bernt Askevold was minister of 14 congregations in America. This postcard is in the collection of photos he left behind. It is not known if he was the minister of the Norwegian Lutheran Church, Eldorado, Iowa, but the building is typical of the Norwegian America, built in the latter half of the 19th century.
Owner: Fylkesarkivet i Sogn og Fjordane/Askvoll kommune. - Date: Kring 1900. - Photographer: Postkort.
Fylkesarkivet i Sogn og Fjordane/Askvoll kommune.
Kring 1900.
Postkort.

The last page of a diary dated Stavanger vicarage, Iowa, 9 December 1902. He concluded: "And now this (....) volume of my diaries is finished. It tells of sadness and joy, good times and bad, change, and a variety of experiences: in Decorah, in Norway, and here. The next volume will show how the Lord gives guidance. Solidea gloria!
Owner: Fylkesarkivet i Sogn og Fjordane/Askvoll kommune. - Date: Ukjend.
Fylkesarkivet i Sogn og Fjordane/Askvoll kommune.
Ukjend.

Bernt Askevold was a writer. He wrote diaries, put his memories on paper about much from Norway and America, and he had an extensive correspondence. Some was printed: songs for special occasions, articles in newspapers, magazines, and books. This is the front cover of a family register, and below, the first page of a song he wrote for the funeral of his father, Mads Askevold.
Owner: Fylkesarkivet i Sogn og Fjordane/Askvoll kommune. - Date: Ukjend.
Fylkesarkivet i Sogn og Fjordane/Askvoll kommune.
Ukjend.