Skjerjehamn is located furthest to the north-west on the island of Sandøy, on what used to be an islet, but now linked to the main island by means of a landfill. The place is located in the shipping lane through Gulen between the Sandøy and Mjømna. Skjerjehamn is said to have been a trading post for centuries. 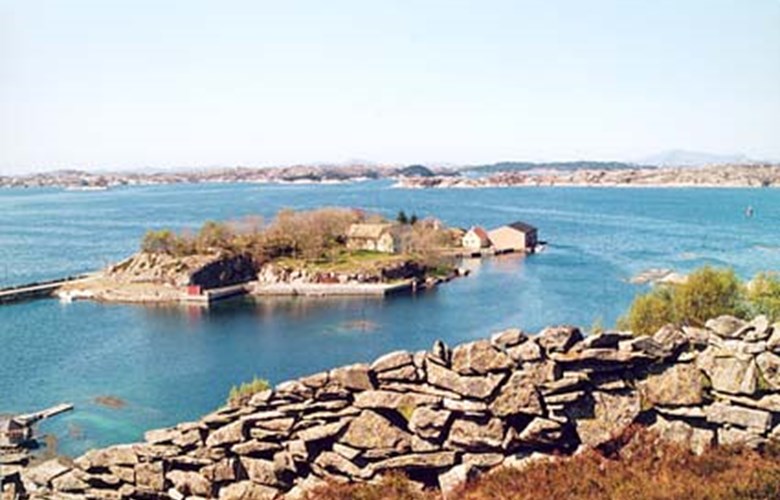 Skjerjehamn in pleasant spring weather in May 2001. The pier to the left in the picture was built in 1949.

Far back in time there must have been a harbour there, and even before 1600 it is believed that people had settled down there. A letter written by Georg Reichwein dated "Schierhavn (sic) 8 February 1641" indicates the existence of an inn. In 1668, the place is referred to as a trading post. From 1697 Skjerjehamn became a court site, and at the court assembly in 1706, it was recorded that the place had an inn and that it had been a trading post for a long time.

The first known tradesman was Jon Dirch. He probably came to Skjerjehamn about 1640. In the 1665 census he is registered as "Citizen of Bergen and employed at Schierjehafen (sic)".
In 1757, when Gabriel Andreas Jæger was innkeeper, the place was referred to in the following way: "The circumstances are that it is a post station for travellers, where good people can enjoy decent board and room, and this is why the place has been established to satisfy travellers' requirements". Jæger had five daughters, and one of them, Margrete, married the famous poet vicar Petter Dass.

Until the master painter Wilhelm Schreuder from Bergen bought Skjerjehamn in 1861, it was the Ross family - from Rossenborg in Sogndal, who ran the trading post. It was Wilhelm Schreuder's son, Otto, who built the residence that is still standing. He also built a big timber depot, and during his years at Skjerjehamn, a sub-post office, a telegraph exchange and a long-distance telephone exchange were established there. In addition, Otto Schreuder ran an export business of fish and live lobster to England. He is said to have been among the first to send the fish in crates.
About 1900, the place was a reloading harbour for many boat services.

Johannes Steine, who took over in 1918, extended the timber trade. He built a timber depot on the quay with a general store and office, and he started up a seine-barking facility, a slipway and a mechanical workshop. The place became a meeting-point where people came to pick up their post, go shopping or make a phone call. People could spend many hours there simply to chat with people and ask for news.
In 1929, Skjerjehamn had 17 steamer stops in addition to the local boat services. Ten years later this was halved. In 1950, there were only two stops in addition to the local routes.

The main building dominates Skjerjehamn. It is a big, two-storeyed building. The house contains guest rooms for accommodation and residence for the owner and his family. The house was built by the master builder Korsvold in 1891 in the so-called Swiss style - like most other hotels from the same period. An old residence beside this house is now used as a woodshed. North of the residence and the small harbour is a big warehouse that contains offices for shipping agents for the coastal steamers.

The ever-increasing number of boat stops had earlier strengthened the importance of the place. Now with a steady decreasing number of stops the place lost its vitality. As the traffic was moved from sea to land, this isolated place was doomed.
Skjerjehamn had a central location in the scheduled services of "Fylkesbaatane" until the 1940s. At present - in 2001 - there are no permanent residents there. The place is privately owned and is used as holiday homes. The buildings have been well maintained. In the old general store the owners have made a museum with many objects and artefacts from the days when the place was full of activity. Some tourists find their way to the place, but there is no shop there or rooms to let as in its golden days.

Øllegaard and Otto Schreuder. He was a tradesman and innkeeper at Skjerjehamn, and in addition, he was a parliamentary member for the conservative party "Høgre" from 1903 to 1906.
Owner: Kidøy, Ingrid / Fylkesarkivet. - Date: 1899. - Photographer: Selmer Malvin Norland.
Kidøy, Ingrid / Fylkesarkivet.
1899.
Selmer Malvin Norland.