The Hellevik farm is situated at the strait of Stongasundet just to the north of Stavang in the municipality of Flora. From the late 17th century until the late 19th century, there was an inn and some trade activities on this site. There are still traces of the old inn. 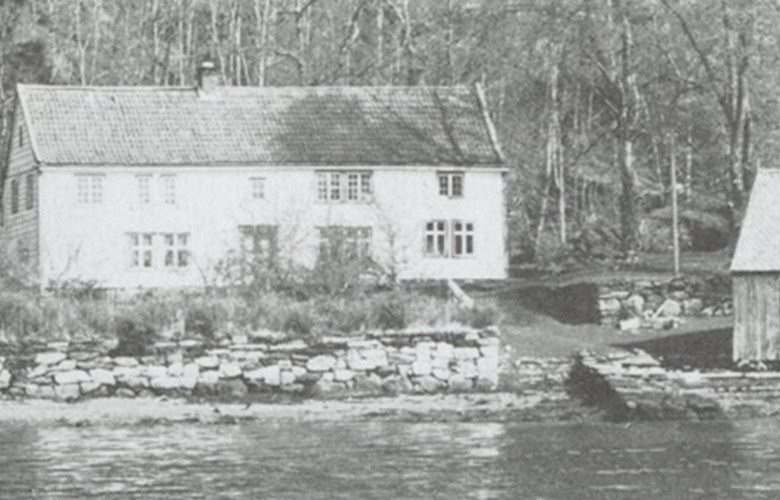 The main residence at Hellevik faced the strait of Stongasundet and was an impressive sight for those who sailed past the house.

Hellevik was ideally located in relation to the boat traffic from the Førdefjord and north towards Florø. The waters were more sheltered than further to the west. From the Førdefjord ships sailed past Stavang and then north through the strait of Stongasundet between the mainland and the island of Stavøya. This is where the Hellevik inn was located. Then ships could sail up along the northeast side of Stavøya and through another strait called Ålvårsundet, across the Solheimsfjord and then out towards Furesund. Furesund also had an inn and a posting station. Hellevik was also strategically located in the big church parish of Svanøy (Bru). The parish church was located on the island of Svanøya, and people had to travel there from the innermost parts of the Nordalsfjord, the Eikefjord and the Høydalsfjord. Most had to pass by Hellevik on their way to and from church. In the 18th century, Hellevik was also a court site, as was the case with so many other inns. 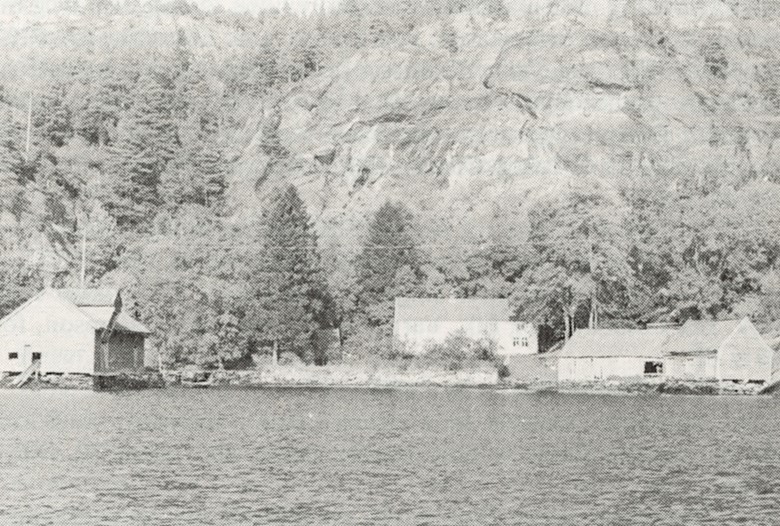 The first recorded references to innkeepers at Hellevik were Albert (Albrigt) Pederson and his wife Abigel Kristiansdotter. In the tax records for 1682, they are referred to as tavern keepers, but they made so little money that they did not have to pay any tax. At that time, Hellevik was owned by commissary Valchor Riisbech in Bergen. In 1712, Antoni Helmer bought the place and he made Albert Pederson relinquish his right to the leasehold in return for not having to pay a house (property?) fine. When Helmer came to Sunnfjord in 1711, the houses at Hellevika were so badly maintained that they hardly had any roofs. Besides running the inn, Helmer also had some trade activities. He complained that the people at Kipperholmen, just to the south of Hellevik, sold beer and tobacco without a licence. In 1714, Maria Helmer is a widow and marries Holger J. Gedding. He then took over as tradesman and innkeeper.

In 1720, Maria married a third time, this time to Wilhelm Bødcker. Three years later, there is a reference to Hellevik in the tax register. According to this, Wilhelm Bødcker owned 12 "mark", and there was enough forest both for firewood and for building materials. The soil was suitable for the cultivation of oats. Half a barrel of oats was sowed with a return of 1 ¾ barrels. There was also a mill on the premises. Of animals they had a horse, five cows, one sheep and three goats. Hay had to be bought elsewhere, but there was some tar burning. The place was referred to as an old, but bad trading post. It was recommended to take two "dalar" in annual tax for this poor property.

The Martens family takes over

In 1732, the Dane Christopher Vibe had taken over as innkeeper at Hellevik. He had received trade licence to sell tobacco, beer and spirits. According to the sources, he was well liked by the general public for the way he ran the store and the inn at Hellevik. He was frequently used by people in the district to plead their cases. In his first marriage, Vibe was married to Wibeke Martens, and it was her son, Ludvig Martens, who took over the ownership of Hellevik in 1750. Vibe continued as tradesman and innkeeper along with his stepson, but they were not always on friendly terms. The inn at Hellevik had never been a profitable undertaking, because in 1767, their financial situation was so bad that Martens could barely pay the imposed taxes.
Ludvig Martens died in 1784, and two years afterwards, his son, Christopher L. Martens, got the licence to run the inn. On 23 June 1799, some of the houses at Hellevik burned down, and it was said that Christopher L. Martens died in the fire. In the 1801 census, the widow Margrethe P. Martens is listed as innkeeper. She has two children, Ludvig aged 10, and Gierke aged four, and two servants.
Margrethe must have been running the inn until 1825, when her son Ludvig became innkeeper. He also extended his trading activities. In the 1865 census, Ludvig Martens has retired, whereas his son is listed as farmer. The reason may be that the inn and the trade activities no longer paid off. When Christopher Martens sold Hellevik in 1891 to John Hansson Snilstveit, the inn had been in the same family since 1732. 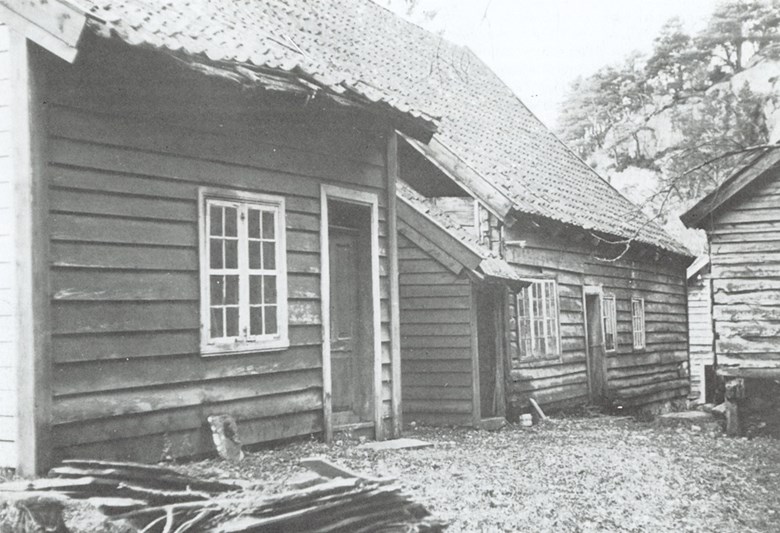 There were originally about ten buildings at Hellevik. The residence, which was torn down in 1980, was a big building in two storeys facing the sea. The building had been extended on several occasions, and the oldest part was probably built after the fire in 1799. It contained a room for the tax collector and a room for the secretary. Just to the north of the residence was the "borgstova" (normally used by servants and guests) and a "stabbur" (storage house for food). Borgstova also contained a tavern, and was originally in two storeys, but was later reduced to one floor. The farmyard also consisted of an "eldhus" (used for baking and washing), a pigsty, a cowshed with a barn, and a sea warehouse. Down by the sea, there was a boathouse and a seine house. In 1980, it was still possible to see remnants of the foundation walls of a small barn and a wooden framework sea warehouse. Close to the tavern there used to be a courthouse. In addition, we know that there have been a "moldhus" (for storing mould or peat moss) and a "gradflor" (a barn).
Many of the buildings have today been torn down. In the 1980s, when a new road with a bridge across to Stavøy was under construction, the residence was blown up. In September 1990, the newspaper Firdaposten wrote that the owner had torn down one of the old houses there, for which he was heavily criticized. 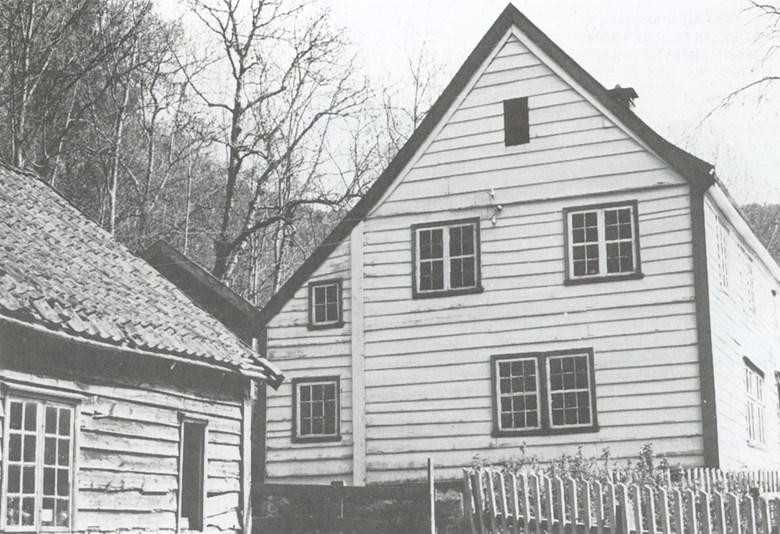 When John Snilstveit bought Hellevik, the trade activities and the running of the inn came to an end. Snilstveit was born on the island of Snilstveitøy in Kvinnherad in Hardanger. He ran a farm at Hellevik, but his main income came from fishing and from owning a seine. His two sons Reinhardt and Annanias took over the farm after him. They lived on the farm till they died, more than 90 years old. Reinhardt had lived in America for some years, but he returned and settled down with his brother. Neither had any children, but it was a close relative who inherited the farm. His name is also John, just like the first Snilstveit at Hellevik. Fishing has been the main income for all the three generations of Snilstveit. 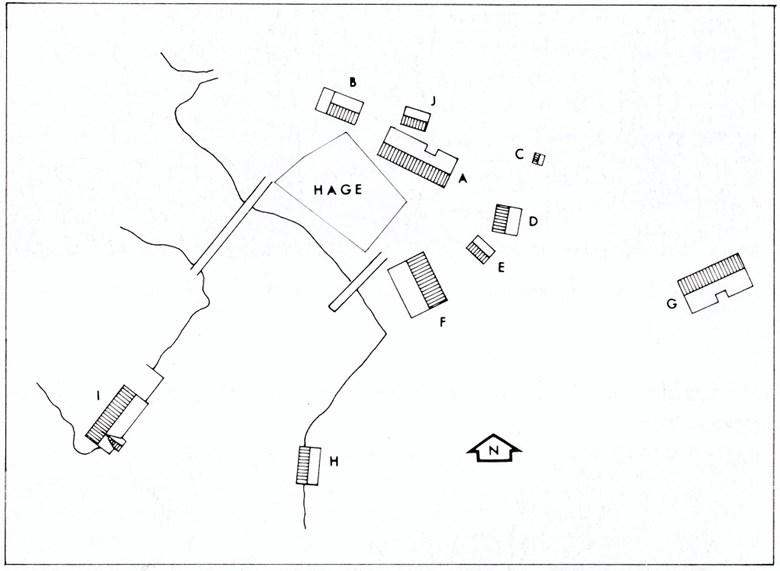 In this picture we can see some of the buildings at Hellevik. Furthest to the left is the big sea warehouse. Just to the left of the residence we get a glimpse of the tavern, partly hidden behind the tall spruce. To the right of the residence we see the boathouse and the seine house. Behind the boathouse we can barely see the roof of the "eldhus".
Owner: I <i>Soga om Flora.</i> - Date: Ukjend. - Photographer: Harald Stavang.
I <i>Soga om Flora.</i>
Ukjend.
Harald Stavang.

The oldest parts of the residence probably date from about 1800. There was a fire at Hellevik in 1799 that destroyed many of the houses. To the left a glimpse of the tavern.
Owner: I <i>Handels- og gjestgiversteder på Vestlandet.</i> - Date: 1970-talet. - Photographer: Ukjend.
I <i>Handels- og gjestgiversteder på Vestlandet.</i>
1970-talet.
Ukjend.

The backside of the residence clearly showed that the house had been extended many times. To the far right is the "stabbur", and between the residence and the "stabbur" we can see a glimpse of the tavern.
Owner: I <i>Handels- og gjestgiversteder på Vestlandet.</i> - Date: 1970-talet. - Photographer: Ukjend.
I <i>Handels- og gjestgiversteder på Vestlandet.</i>
1970-talet.
Ukjend.