Svelgen chapel is a local church community centre built in concrete in the municipal centre of Svelgen in Bremanger. The chapel - with a seating capacity of 290 - was consecrated on 9 October, 1960 by the bishop Ragnvald Indrebø. The architects Claus and Johan Lindstrøm made the designs. Svelgen chapel district is a part of the Midtgulen "sokn" in the parish of Davik. 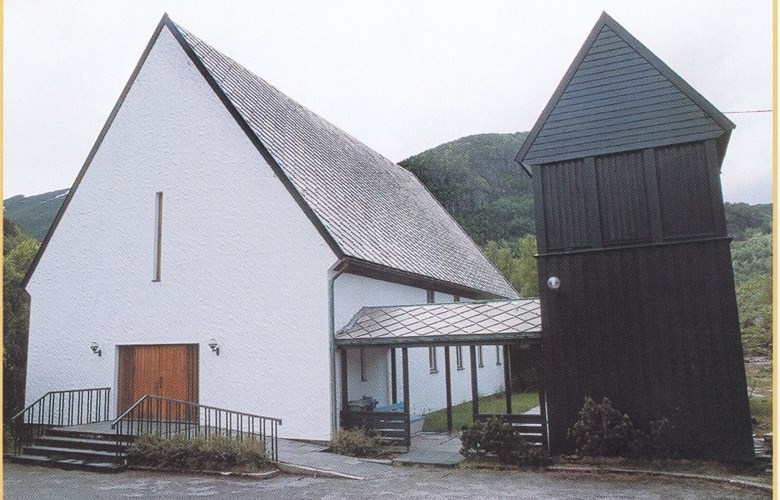 Svelgen chapel is a modern church, a cross between a traditional church and a local church community centre.

Svelgen did not have any other assembly hall than the "Folkets Hus" (literally the House of the People), when the place had gone through a period of hydro-electric power construction and industrial development after 1920. A few Sunday services were held here every year, otherwise people had to go to the church at Midtgulen, and before that time, to the churches across the sea of Frøysjøen. Before World War II, plans were made to build a "bedehus" at Svelgen. For this purpose the Bremanger Kraftselskap (Hydro-electric Power Company) donated a site at the point of Naustneset.

After WW II, Svelgen developed into a modern, well-regulated industrial site centred on the cornerstone company of "Bremanger Smelteverk" (smelting plant). In 1946, the plans of building a "bedehus" were altered to "bedehus" chapel, and the newly established "Svelgen Vel" ( Residents' association) started its annual fund-raising activities. "Indremisjonen" (the local evangelist organisation) contributed with the means they had raised already, and the work got off to a promising start. There was some disagreement about the original site for the building, and the matter was finally resolved when "Bremanger Smelteverk" donated a new site at Skuleberget in 1957. The new site had a high location with a good view of the town. 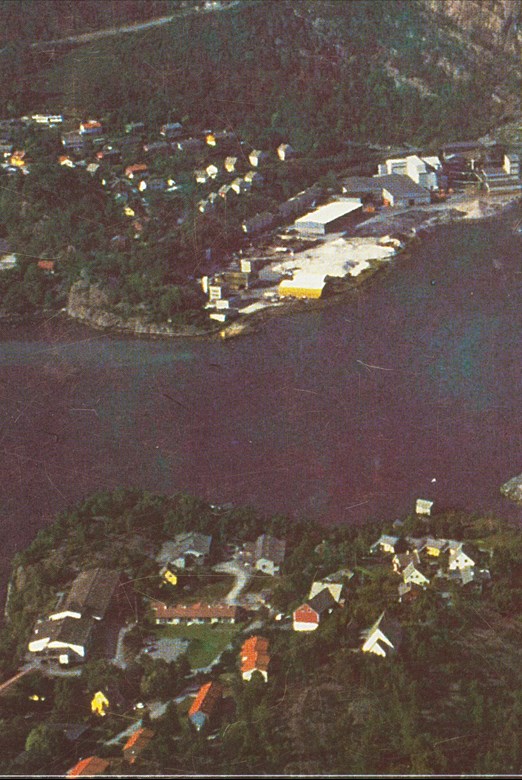 An important reason for the slow 40-year progress until the building plans could be realised was the fact that there was a slow growth in the population of the Svelgen community as well. After 1955, when the company of "Christiania Spigerverk" took over the plant, the population started to grow, and this led to important contributions to the financing of the chapel. Here, as in other industrial towns in the county, the company contributed to the financing of the church building.

On account of the façade, the church was not built in the usual east-west orientation, but more northeast-southwest. Originally the meaning was to build a basement floor, but it was considered too risky to start blasting the bedrock without knowing the extent of the extra cost this would imply. Instead, it was decided to build a meeting-room extension beside the church. However, when the construction work was about to be started, this plan was scrapped as well, simply because there was not enough money available. The high inflation rate in the 1950s had reduced the value of the means raised so far. The building committee had problems finding the necessary means to fill the church with the furniture and objects needed in a house of God. The final result was a church building with a vicar's vestry, a meeting hall, a small kitchen, and toilet facilities. In an extension beside the main entrance is the belfry with a "coffin room" in the bottom section.

Financial difficulties may explain why the interior refurbishing and decoration became quite simple. Svelgen chapel has kept its original refurbishing. Instead of ordinary pews chairs were installed and painted in a rather sharp blue colour. In the chancel there is a simple wooden cross which functions as an altar decoration. The chancel itself is not as wide as the nave, and its ceiling is mostly flat, but slopes down towards the four side walls. The square form prevails in the chancel, the font, and the pulpit. In the chancel there is only one window, and in the nave there are four latticed windows in lead frames on either side wall.

The walls are white-washed, and the red carpet - which also covers the chancel floor - is a fine detail which gives a soft touch to the otherwise cold impression in terms of colour scheme and form. Another fine detail is the small gallery, where the organ pipes on both sides of the organ are formed in line with the vaulted gallery ceiling. The panelled ceiling is also vaulted in the nave, but with a lowered flat ceiling towards the side walls. From the passageway leading to the belfry there is a separate direct door entrance to the pulpit.

The church is no longer so visible because of the growing trees. People who come to the church must often ask for help to find it, and the small side road from the western part of the town centre is hard to find on one's own. However, this steep and narrow road is also a problem for local people, especially in wintertime. Plans are now being made to make a new road to the chapel, in addition to extending the car park in front of the building.

The altarpiece is a simple pinewood cross. On the altar there are two silver candlesticks, one has the inscription "In memory of Marit Kleiven". The Holy Communion objects consist of a chalice and a dish in silver with the inscription "From Svelgen "Indremisjon" (evangelic organisation), a pyx and a silver wine cruet. 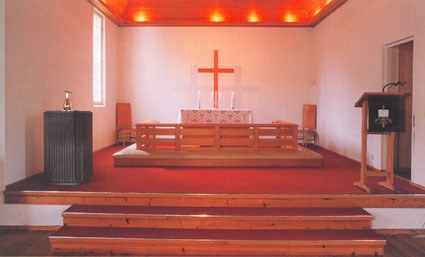 Most of the interior dates from 1960. The pulpit is made by "Brødrene Bjørlo". The font is made of soapstone and weighs close to 900 kilos (2000 punds). It is formed by "Vestlandske Stenhuggeri". The silver baptismal bowl has the inscription "Suffer the little children to come unto me, and forbid them not: for of such is the kingdom of God" (Mark 10;14), and "From the Norwegian Seamen's Mission, 9 October, 1960". The holy water ewer has the inscription "From Svelgen Iron Workers' Union, 9 October, 1960". The organ is built by J. H. Jørgensen. The church bells dates from 1946 and is made by "Olsen Nauen Klokkestøperi AS", with the inscription "Hope".

Concrete was the natural choice of material when it was decided that the industrial town of Svelgen would get their own house of God. The belfry, which is built in wood, is placed next to the church, close to the entrance.
Owner: I <i>Svelgen - Frå gardssamfunn til moderne industrisamfunn.</i> - Date: 1995. - Photographer: Lars Olav Rylandsholm.
I <i>Svelgen - Frå gardssamfunn til moderne industrisamfunn.</i>
1995.
Lars Olav Rylandsholm.

Three steps above the nave floor is a relatively simple chancel, with a simple cross as an altar decoration. The font in massive soapstone stands out in a way in the otherwise plain church room. The door to the right leads to the vicar's vestry and the other rooms in the chapel.
Owner: Bremanger kyrkjekontor. - Date: 2003. - Photographer: Knut Arne Vadøy.
Bremanger kyrkjekontor.
2003.
Knut Arne Vadøy.

Svelgen church is built on a location which was more visible in the terrain 40 years ago than it is at present. The narrow and steep road leading up to the church could actually be used as a symbol of the long process and the uphill struggle the people of the industrial town of Svelgen had to go through before the completion of the church. 'Because strait is the gate, and narrow is the way, which leadeth unto life, and few there be that find it' (Matthew 7;14).
Owner: I <i>Svelgen - Frå gardssamfunn til moderne industrisamfunn.</i> - Date: 1995. - Photographer: Lars Olav Rylandsholm.
I <i>Svelgen - Frå gardssamfunn til moderne industrisamfunn.</i>
1995.
Lars Olav Rylandsholm.
resources:
Aaraas, Margrethe Henden m.fl.: På kyrkjeferd i Sogn og Fjordane - 1. Nordfjord og Sunnfjord. Selja Forlag. Førde 2000.