In December 1931, the Panama-registered wessel "Venus" was wrecked off Vågsøy. Only two out of a crew of 13 were rescued. Nine men hailed from Shetland. There is a memorial for them at Vågsvåg and a cross on a grave at Måløy. 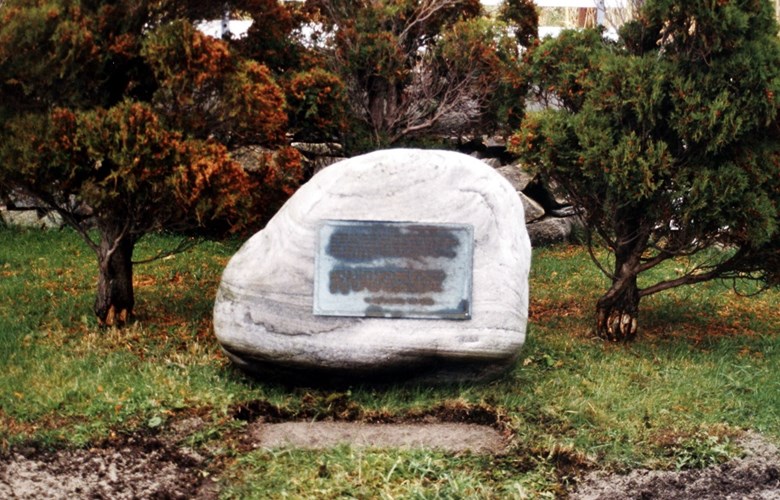 The memorial at the Vågsvåg churchyard commemorating the nine men from Shetland who lost their lives at the Hindanes lighthouse on 12 December 1931.

On the churchyard at Måløy, there is a simple cross standing on the grass. The plaque has a name, home place, age and date of death. It has the following text:

The man was one of the five who were found after the shipwreck at the Hindanes lighthouse off Torskangerpollen on 12 December 1931. John Corkish was found at Hoddevik at Stadlandet shortly after the shipwreck and was buried on the churchyard at Måløy. The four others were buried at Vågsvåg. 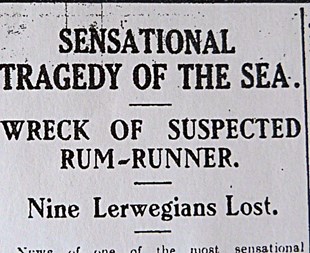 For many years, there used to be four crosses on the graveyard at Vågsvåg. Many years ago, these crosses were removed and replaced by a memorial with the following words written on a plaque:

In memory of the nine men from Lerwick, Shetland, who lost their lives when their ship "Venus" was wrecked on the coast of Vågsøy on December 12th 1931. William Davidson, Magnus Edwardson and Charles O'Neil are buried in Vågsvåg cemetery. John Corkish in Måløy churchyard. For William Forbes, Hugh Hunter, Laurence Hunter, James Irvine and Peter Sim the sea was their grave.

(The same text is also written in Norwegian). 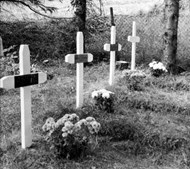 The local papers Fjordenes Tidende and Fjordabladet ran articles on the shipwreck the following day. Fjordabladet had received a report from Måløy that "a German trawler coming from Iceland" had run aground at Hindanes. Of the 13-strong crew, 11 drowned and only two survived.

Later another report stated that this was by no means a trawler, but a rumrunner that the customs cruiser "Nordland" a short time earlier had been chasing off the Møre coast without any success.

Two days later, Fjordabladet could confirm that it was indeed a smuggler ship - 200 cans of alcohol had floated up to the surface. The two survivors were arrested, and one had been arrested earlier as a smuggler captain on a different boat.

The Shetland Times on the shipwreck - 37 years later

In 1978, a convoy of leisure boats sailed from Shetland to the county of Sogn og Fjordane, inlcuding Måløy. The newspaper The Shetland Times afterwards reported that some had visited the graveyard and seen four crosses there.

The newspaper also ran an article on the tragic event in 1931. A German-registered trawler had arrived in Shetland in September that year. A few weeks later, the ship had changed her name to "Venus" and also been re-registered to Panama. After a voyage in November, most of the crew signed off, but it was easy for the owners to sign on a new crew. Unemployment was high, and many were desperate to find work that might give some income. Even if many people in Lerwick were suspicious that the "Venus" was no ordinary fishing vessel, but rather a rumrunner, engaged in smuggling activities along the Norwegian coast, nine men took the chance. "Venus" left Lerwick on 1 December.

The boat called at many places along the Norwegian coast until a coast guard boat contacted the boat off the Møre coast. The rumrunner managed to escape, but was badly damaged when the coast guard opened fire. In stormy weather a couple of days later, the boat came off course and started to take in water. It ran aground twice and drifted helplessly towards land. Six men disappeared when their lifeboat was smashed. Only the first mate and the engineer were rescued. Four bodies were found and were buried at Vågsvåg, according to The Shetland Times.

In 1931, two newspapers ran articles on the funeral at Vågsvåg on 16 December. The coffins were nicely decorated and pastor Sverre Nybø Jr. from Selje officiated. The British and German consuls were present, and the service was attended by many people from the local villages. The coffins were laid side by side in a common grave.

Memorial instead of crosses

On the grave at Vågsvåg, four crosses were later placed. The crosses on the graves of Magnus Edwardson, William Davidson and Charles O'Neil, all from Shetland, had nameplates. The fourth cross had no name plate.

Many years ago, the crosses at Vågsvåg were removed and replaced with the present memorial. Teacher and sexton Anfinn Kragset took the initiative. The memorial consisted of a big, naturally formed rock and a plaque. Shetland participated when the Lerwick Community Council "presented" the plaque, and with visitors from Shetland attending the unveiling ceremony.

Wreckage at The Shetland Museum

In 1989, The Shetland Museum got some objects from the wreck, probably found by sports divers. These objects are registered in the following way:
"short desc(?) spoon, glass jar and stopper, glass jar with cork, brass knob and mortice lock, reduction joint and bronze bush, bronze assembly, piece of plumbing" and "wash hand basin."

The memorial at the Vågsvåg churchyard commemorating the nine men from Shetland who lost their lives at the Hindanes lighthouse on 12 December 1931.

Four of the deceased were buried at Vågsøy. The crosses with the nameplates stand on the graves of three men from Shetland.
Owner: Shetland Museum. - Date: Ukjend. - Photographer: Ukjend.
Shetland Museum.
Ukjend.
Ukjend.

From the funeral at Vågsvåg on 16 December. Pastor Nybø Jr. from Selje officiated. We do not know who the four others are.
Owner: Shetland Museum. - Date: 1931. - Photographer: Ukjend.
Shetland Museum.
1931.
Ukjend.