At the southernmost point of Bremangerlandet is the old inn of Smørhamn. The sea entrance from the west is narrow, and it is necessary to stay close to the island of Rota. To the east are the frequently weather-exposed waters of Frøysjøen. To the west is the island of Frøya with the small town of Kalvåg, now connected by bridge. Smørhamn is still an important harbour for ferry and express boats. 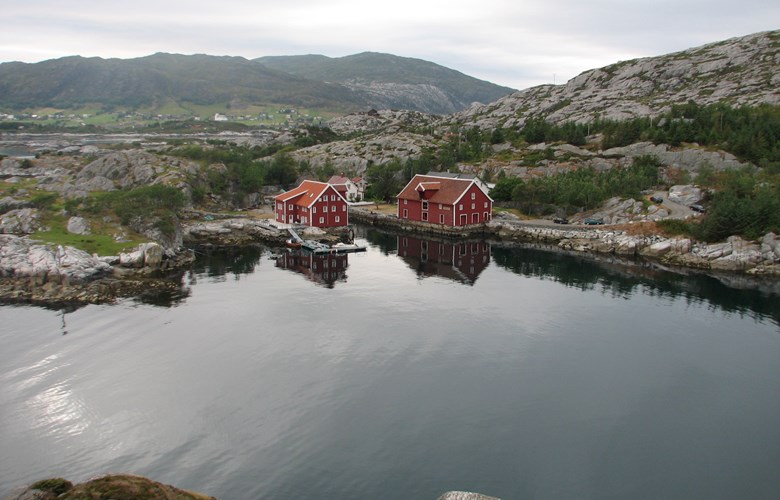 From days of old, there have been inns along the shipping lanes where travellers could stay overnight or seek shelter in bad weather. According to an old decree, these inns should be located a mile apart - one old mile was equal to 36 000 feet. Mile crosses were placed along the sea-lanes as official distance points. Between Furesund and Rugsund lay the inn of Smørhamn, the northernmost in Sunnfjord. Trading and inn-keeping had been carried out there from the late 17th century. The first recorded reference is to a woman trader called Magdelene in 1664.

The first trader and innkeeper we know about from Smørhamn is Jørgen Berentsen Balchen. He came to the place about 1680. "Seigneur" Paul Qvale then ran Smørhamn until Jørgen Anderssen Balchen took over the place and the licence. The latter had for a while run the inn at Osen at Bygstad. He married rich and was a wealthy man. Jørgen Balchen ran a comprehensive business with fish export, and he was also a commissioner for Bergen fish traders. His death estate in 1777 amounted to 14 601 "riksdaler".

About 1785, the district magistrate Hans Arentz refers to Smørhamn as the northernmost inn along the original shipping lane across Frøysjøen to Nordfjord. It was the location of the place in relation to the fisheries that made it such a good place to run an inn, as well as making for good trade. He highly praised those who were in charge of the trading activities there. They had done well, compared to other similar trading posts and inns along the sea-lane. Nevertheless, in Arentz's opinion, the inn should rather have been located at Gulestø on the mainland in Bremanger.

At the time that Arentz wrote about Smørhamn, it was George Ross who was tradesman and innkeeper there. He took over the place in 1778. He may have come from Shetland. In 1790, Henrich Henrichsen Lexau got the licence to run a trade and inn at Smørhamn by paying 50 "riksdaler" - once and for all - to the rural granaries in Norway. Lexau died as a rich man in 1806. It looks as if his widow ran the business activities until their son Jens Lind took over. In 1865, Andreas R. Lexau ran the trade there. He had a number of employees: a shop assistant, two servants, four maids and a cooper. That year 29 persons are registered at Smørhamn. Bailiff Steen lodges with Lexau. In Lexau's household there is also a woman teacher. Apart from the Lexau household there are two others. One was the cooper Simon Monsson family and maid, the other was the crofter Ole Larssen with his family.

Smørhamn was included as a steamer stop from the very first timetable of the shipping company "Fylkesbaatane" in Sunnfjord and Nordfjord. This happened in 1858/59, but as early as 1862 the stop at Smørhamn was replaced by Kalvåg. Not until 1956 was Smørhamn once again considered as a steamer stop. In that year a new road was built between Ryland and Smørhamn. A bus connection between Bremanger and Smørhamn was soon established, and the issue of boat connections to Kjelkenes and Florø was brought up. In the winter of 1956, Smørhamn was once again included as a steamer stop. The quay was built by the same man who became the shipping agent, Karl Vadøy. From 1974 there was a ferry service both to Kjelkenes and Florø. The express boats between Bergen and Nordfjord have had stops there since 1972.

The harbour has the shape of a long, narrow strait ending in a boathouse. All the buildings at Smørhamn are located around this harbour. On either side of the entrance to the harbour there is a big sea warehouse. The residence and the old courthouse are located on the northern side of the harbour. The residence is a one-and-a-half-storeyed building with a lean-to dormer. Before 1950 this dormer was pitched. The courthouse has been considerably rebuilt, and towards the late 20th century it was used as a residence. This house has also been used as a shop, bakery, and school.

From trade to harbour

According to the land register from 1890, it was Albert Blytt who owned Smørhamn. Ten years later we find Ivar Hanssen Haukenæs as the business manager. He has a wife and three children, as well as a maid in his household.

At the end of the 19th century, there was no longer any trade at Smørhamn. Kalvåg took over many of the functions that Smørhamn used to have. Kalvåg developed as a centre for the fisheries where fishermen could deliver their catches, trade goods and stay overnight. Not until the road came in the 1950s, did Smørhamn get a new growth with regular boat routes and later on ferry services. It is as a harbour that the place now has its most important function.

The shipping agent Karl Vadøy, originally from Bulandet, bought Smørhamn in 1922. Karl Vadøy was a fisherman who operated seines to catch herring, he also fished salmon and other fish, and he was an active fisherman until 1958. He held many political offices as a representative for the liberal party called "Venstre".

Protection of the buildings

About 1990, there was a need for means to restore some of the old buildings at Smørhamn. The owners asked for help to restore the big sea warehouse. The roof, in particular, was in a bad condition. They hoped that Smørhamn, like some of the other old trading posts, could be included in a protection plan. The old buildings were big and expensive to maintain. Svein Inge Fosse had bought one of the sea warehouses and had plans to start renting out fishermen's sheds. He wanted to find out whether any protection plan would allow such an activity.

One of the sea warehouses was restored in the mid-1980s, but was damaged in the so-called New Year's storm in 1993. It is to be hoped that this restoration work can get started in the summer of 2001. The roof is in desperate need of repair. The other sea warehouse was repaired in 2000 with new tiles and panelling. The residence has also been repaired, and there are plans to rebuild a boathouse that was torn down. When all the maintenance and repair work has been completed, they hope to start up rental of accommodation for tourists. The old trading post at Smørhamn is protected but not listed, which means that there are restrictions as to what can be done with the buildings. Ingeborg Vadøy owns the main farm at Smørhamn, whereas Johan and Knut Arne Vadøy own two of the old sea warehouses there.