Byrknesøy chapel was originally a "bedehus" (a lay evangelical house) located in the extreme western part of the municipality of Gulen. The chapel, which has a seating capacity of 200, was consecrated by the bishop Per Juvkvam on 26 May, 1972. It was designed by the architect Johan Tveit. Byrknesøy chapel belongs to the Mjømna "sokn" in the parish of Gulen. 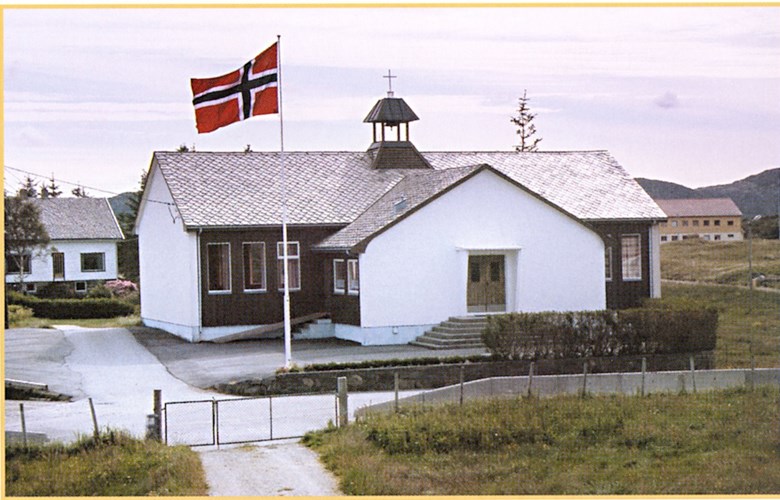 From the outside the building looks just as much as a 'bedehus' than a chapel. That may be one reason why most local people still refer to this chapel as a 'bedehus'.

A house of worship for church use

The chapel at Byrknes is located on the same site as the former "bedehus" on the island. Most people still call it "bedehus" (literally a prayer house), but it is in fact a consecrated chapel with church functions.

The house represents these simple houses of worship that are found in many places in this county, especially along the coast and on the islands. What is special in this case is the fact that such a church building was erected at a time when it was much more usual to build local church community centres in concrete. The islanders on Byrknesøy wanted a replacement for the "bedehus" which would be more spacious and have a proper kitchen. For this reason they chose a relatively traditional building, but with more or less the same functions as the local church community centres. Many years beforehand people had started to raise money for this purpose, but it was only towards the end of the building period itself that the small congregation began their work to get the house consecrated for church use.

Owned by the evangelical friends

The board of directors in the "bedehus" association is in charge of operating the house which is owned by the evangelical home mission members of Byrknes. The house is often let to other associations and organisations, and also to the Church of Norway in connection with services. The entrance to the chapel is from an extension on the west side. The entrance extension also contains toilet facilities, cloakroom and kitchen. Further into the southern section of the house we find the main assembly hall with the chancel section at the opposite end. The chancel section has the same width as the main room, and it is separated from the main room with one step about 1.5 metres (about five feet) from the wall.

On the northern side a smaller room has been furnished, with sliding doors in the event that more seating space is needed in the main hall. The smaller room is also used as a dining hall, as well as an activity room for children.

In 1980, the people at Byrknes finally got their own church bell. The bell was partly financed by a donation from the shipping company "Det Stavangerske Dampskibsselskab", owner of M/S "Austri" which went down outside Byrknesøy in 1979. Local people took part in the rescue operation and were able to save the crew, but this tragedy cost the lives of five men. In order to make room for the bell, the turret was extended.

The altar, the altar rail, and the font are put in place in connection with services and other church meetings. In other respects the chapel is furnished as an ordinary "bedehus", and the main hall is mostly used for spiritual revival meetings and fund-raising activities.

The altarpiece from 1911 has a picture entitled "Come to me, all", made by Vilhelm Bjørknes. This is the earliest known altarpiece made by Bjørknes, and it was formerly placed in the old "bedehus".

On the altar there are two silver-plate candlesticks. For Holy Communion purposes there are a chalice, a paten, a pyx, and a wine cruet, all in silver plate. The wooden font is made by Karl Berthelsen. The baptismal bowl and ewer are also made of silver plate. Like most of the other interior objects, the pulpit also dates from 1972.

Vilhelm Bjørknes (1884-1969) was born on Byrknesøy. He was a very versatile man: a smallholder, a tradesman, an emissary for the China mission, as well as an artist. About 125 of his paintings in churches and "bedehus" have been registered all over the country, in particular in western Norway, but also in eastern Norway and in the region of Trøndelag. In addition, four of his paintings are found in churches in the missionary fields of Ethiopia and China. In churches and "bedehus" in the county of Sogn og Fjordane alone there are about 25 of his paintings, for example at Bulandet: "Gethsemane" (1917), Mjømna: "The Resurrection of Jesus" (1927), Ljosheim in Oldedalen: "The resurrected Jesus" (about 1930), Vadheim: "Gethsemane" (1954), Askrova: "Jesus saves Peter" (1957), Værlandet: "Lord, save me" (1959). 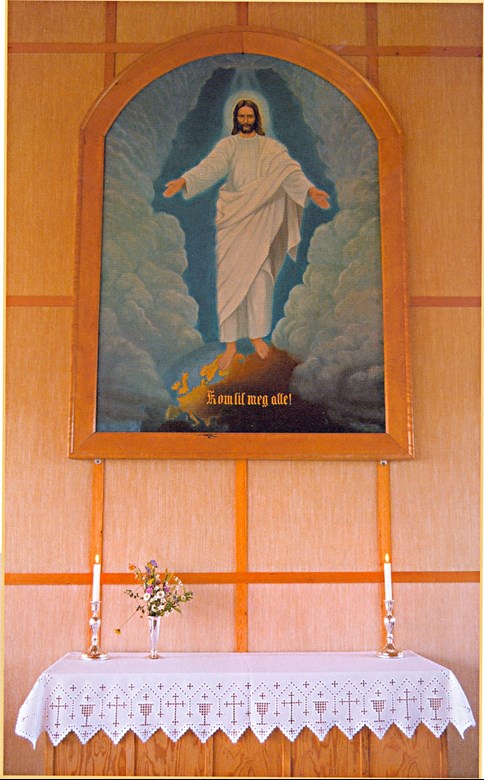 Vilhelm Bjørknes studied at the art school of Asor Hansen (1862-1929) in Bergen in 1901-1902 at the same time as Mons Breidvik. One of the most commonly used motifs is Jesus in the garden of Gethsemane. On these paintings the following information is given besides the signature: "Copy after Homann" or "Copy after Block". These two are most likely the Dane Johannes Bendtsen Hofmann (died 1733) and the German Mathias Block (18th century) who both worked in Norway. Other paintings are often representations linked to the suffering, death, and resurrection of Jesus. The artistic style is naturalistic.