Ljosheim chapel, built in concrete and wood, is situated on the farm of Mykløy in the valley of Oldedalen in the municipality of Stryn. The chapel has a seating capacity of 130, and it was built in 1924 and consecrated for church functions on 22 October, 1935. The emissary Andreas Sande made the designs. Ljosheim chapel belongs to the Olden "sokn" in the parish of Innvik. 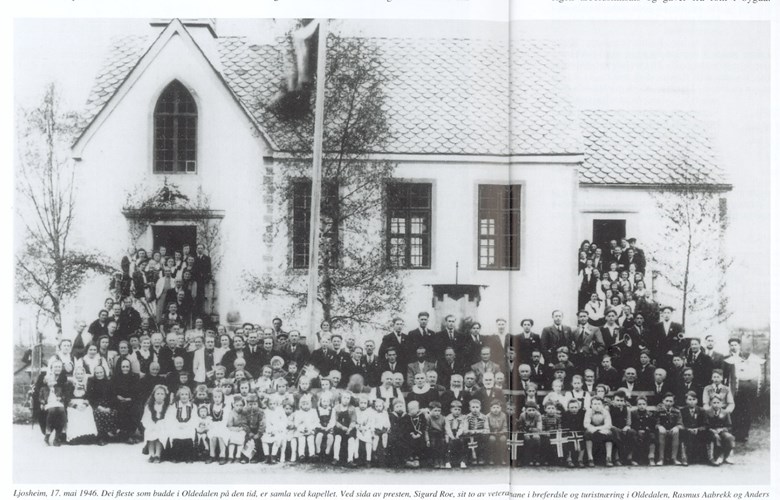 On 17 May, 1946, practically all inhabitants in the valley of Oldedalen were congregated at Ljosheim chapel. Vicar Sigurd Roe sits in the middle. Just to the right of the vicar sit the two glacier guide veterans Rasmus Aabrekk and Anders Briksdal. They were both 85 years old, and both were decorated with the King's medal for meritorious services.

The localization issue in Olden

The discussion concerning the localization of a new church building in Olden started in the 1920s, lasting until August, 1933, when a final decision was made at a church meeting. 107 persons voted in favour of (8 against) dean Nybø¿s proposal that the old church should be left standing and be maintained. A new church would be built at Brynestad according to architect Muri¿s designs. The ¿bedehus" chapel further up in the valley would be refurbished for church use and be given four services a year.

This decision gave the people of Oldedalen promises of services in the ¿bedehus" chapel. In 1929, the inhabitants put forward a demand to the Ministry of Church Affairs that the new church should be built at Eide or Lauki. Instead, they now got the necessary support to rebuild their 10-year-old ¿bedehus" chapel so it could be used as a church for the population of Oldedalen. In 1935, Ljosheim was consecrated as a chapel. From now on, then, they were spared the long and strenuous journeys to get to church, either by walking long distances or crossing the lake of Oldevatnet by boat in all kinds of weather. When the road down to the fjord was opened up for traffic in 1955, their lives were changed drastically, and it became much easier to get to church.

In the 1920s, the population of Oldedalen was only about 200, and if they were to build a new assembly house of their own, they would have to do this in the least expensive way possible. They decided to use blocks of cement stone as building material, because sand was an abundant resource in the valley.

As the name at first belonged to a ¿bedehus" chapel, the chapel was given a typical ¿bedehus" name. (¿Ljosheim" literally means ¿light home"). As a church building, it might perhaps have been more appropriate if it was named after the village or the valley of Oldedalen. The Ljosheim name was already well established, and it was not changed even if the building later got a chapel status. Ljosheim chapel and the Anglican St Olaf Church in Balestrand are the only two churches in the county with non-geographical names.

Built by the people in the valley

Originally it was a rather simple house of God that was erected on the flat field a short distance up from the lake in the valley of Oldedalen. Some people within the local evangelist society under the leadership of Fredrik Kvame were able to get hold of the necessary equipment to cast the cement stones. Professional people were hired to do the walling job itself, but everything else was done by voluntary work. Individuals contributed financially to the project so the villagers did not have to borrow too much money. The ¿bedehus" was built with a meeting room and kitchen in the basement, and a main hall and gallery on the main floor. Behind the meeting room, there is a smaller hall with doors that can be opened up completely in case more space is needed. The house was placed in a north-south direction, in the same direction as the valley itself.

When the ¿bedehus" chapel had been consecrated for church use, it had already an extension with a chancel, a small vestry, as well as a belfry. At that time the Oldedalen evangelist society was responsible for the economy, as they are to this day. An annual fund-raising event in the house is the main source of income, in addition to rent from the municipal authorities whenever Ljosheim is used for church functions. In connection with funerals, memorial donations are frequently given to Ljosheim, and these have also been a significant contribution to the economy throughout the years.

All these years, Ljosheim chapel has been used for various purposes. For a period the small hall was even used as a classroom. Every year there are five-six fund-raising activities in the house for various evangelist and missionary societies, as well as one event to raise money for the house itself. These events include entertainment, food, and devotions, all taking place in the church room.

Around 1970, a new entrance hall was built, and toilet facilities were built in the basement where the kitchen used to be. A new kitchen was refurbished at the opposite end of the basement, under the chancel. At the same time, the vestry was extended, and the benches in the chapel were replaced by chairs. The chapel is a simple but nice house of God, painted in rather neutral and light colours. The most conspicuous feature in the interior is the chancel archway which is decorated like a rainbow. The rainbow is a token of God¿s covenant with mankind by Noah (Genesis, 8-9). The walls are painted yellow, with grey wainscoting, whereas the ceilings in both the nave and the chancel are painted in a pale-green colour. The ceiling is flat in the centre, slanting off to the side walls.

Already from its first year in 1924, the house was used for services, but only on special occasions. After the extension in 1935, there were about five services annually, but people still often went to Olden for the major church holiday services. Today there are about 10 services every year in the chapel. The chapel is also used for funeral receptions, but the graveyard is situated in Olden.

The painting "Jesus in the garden of Gethsemane" is made by Vilhelm Bjørknes, and is a gift from the family of R. R. Aabrekk. In the staircase hangs a portrait relief from 1982 of Hans Nielsen Hauge. The draft was made by the vicar Erling Grønland. Under the portrait there are two Hauge quotes: "I have sworn obedience to God¿s spirit" and "He has helped me stay faithful to my resolutions".
The electronic organ dates from 1970, and the church bell from 1935.