"Knut" and two other six-oared boats

The "Sunnfjord boat" used to be the common boat type in the Sunnfjord area, but already 150 years ago, it was beginning to lose ground to a modified version of the "Nordfjord boat". The coastal society "Over stokk og stein" (literally: stumbling forward) at Bremanger today owns one of the few original Sunnfjord boats still afloat. 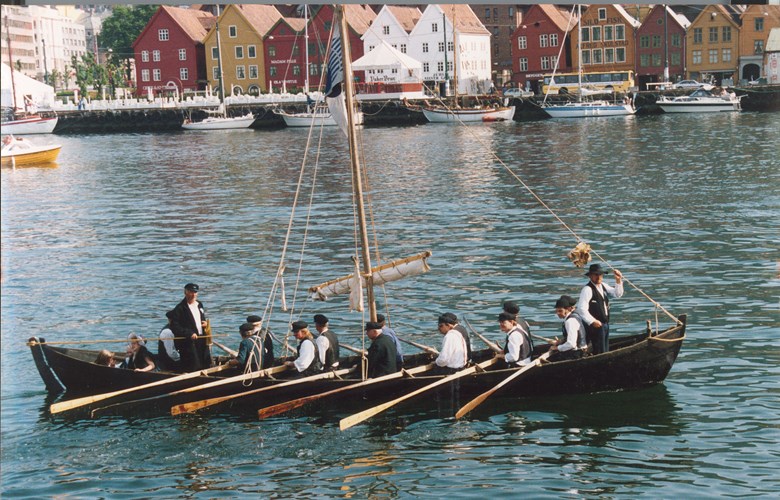 The coastal society "Over stokk og stein" in the Bergen harbour with "Knut".

"Knut" is a six-oared boat, built about 1860 on the farm Ytrehus in Bremanger by Knut Arntsen Kjelkenes and Bernt Jørgensen Rylandsholm. However, the boat is not only interesting in itself, but is also of interest from a historical point of view. This history deals with boat-building, fishing, and low-technology innovations.

Knut Kjelkenes and Bernt Rylandsholm were surely well pleased with their work when they launched their newly built six-oared boat. They both had good reason to be satisfied. The boat was not only used actively in the fisheries long after Knut and Bernt had died, but it also represents some 140 years later a unique example of an extinct boat-builder tradition. For this reason two copies have been made: the boat "Knut" owned by "Over stokk og stein", and "Sunnfjord" which is used at the Viking Ship Museum in Roskilde, Denmark. The original does not really have a name, but is usually referred to as the "Sekskeipen" (literally: six pairs of oarlocks). "Sekskeiping" is the common term used for boats of this size, and shows how many oarlocks it has. The boat measures 9.1 metres in length from stem to stern, it is 2.3 metres wide, and 0.66 metres deep.

If we take a closer look at the "Sekskeipen" from Ytrehus, we shall find out characteristic features for both small and big Sunnfjord boats. The bottom is rather flat, and it is hewn from solid boards more than an inch thick. This makes for a sturdy boat with a good load capacity. The boat has a square sail, and, if the sea is not too heavy, the boat will sail quickly and steadily. These features earned the Sunnfjord boat a reputation as an excellent boat to sail in an archipelago, and, consequently, made it for a long time well suited as a good fishing boat.
However, this changed from the mid-19th century when the fisheries moved from fjords and islands to further out at sea. More and more fishermen tried their luck with long-line fishing for ling and torsk, and this fishery took place between one and three nautical miles (1 old Norw. nautical mile ~ 7420 metres) off shore. Long-line fishing, then, posed other demands to the boats than the traditional seine fishing near the coast. In a couple of decades, the Sunnfjord boat became outdated, whereas the Nordfjord boat gained ground.

The Nordfjord boat is modified

There are two main reasons why the Nordfjord boat came to dominate: one reason is technical improvements and the other is a larger degree of market adaptation on the part of the boat-builders in Nordfjord. Even if the Nordfjord boat was originally a fjord boat, it was considered easier to row and better at sailing in high waves than the Sunnfjord boat. The Nordfjord boat-builders also added important improvements to make it better suited for long-line fishing. The stern room was lengthened and built higher, which led to more room for the line gear, at the same time as the balance was kept, even with a heavy load at the stern.

These technical improvements show that the Nordfjord boat-builders were willing to adapt their product to the market, even if there were those who were displeased about modifying an old building tradition. In addition to these changes, the production itself was also adapted to the new times and a bigger market. The boat-builders no longer waited for boats to be ordered, but had a steady production of boats that could be delivered immediately to potential buyers. In some villages, especially in Gloppen, boat-building was an important supplementary industry on many farms, and with a production of five-six boats per farm, this provided a handsome income. When the boats were completed, they were rowed, sailed or towed to their clients. In one case one man alone transported five boats all the way to Gulen in Sogn.

The art of boat-building on the wane in Sunnfjord

This enterprising market orientation is in stark contrast to the more conservative and tradition-bound boat-builders in Sunnfjord. In this area it was more common to order boats, and it could take up to one year before the boat could be delivered. This was partly due to the fact that it took a long time to find the right material for each boat, but the construction itself also implied time-consuming hewing of the material, in contrast to what they did in Nordfjord by using adapted sawn material. Knut Kjelkenes and Arnt Rylandsholm, then, represented the last generation in their families to be boat-builders.
However, the Nordfjord boat dominated the market only for a short while. Towards the end of the 19th century, new and bigger sørabåtar with sprit sail (?) and gaff sail took over as the boats most in demand for ocean fishing.

"Sekskeipen" in active use in some 50 years

Even if the Sunnfjord boats gradually went out of production, this does not necessarily mean that they all went out of use. The boat was known to be durable, and frequently in use after 100 to 150 years. "Sekskeipen" was thus in active use at least 50 years after it was built. In the winter months it was used for the herring and cod fisheries in Bremanger. During the long-line fishery, there were usually six men onboard, and they were out at sea more than 24 hours every time. In between working with the long-line, they fished redfish, and when they got ashore there was still a day's work of gutting and salting the fish.
About the time of the First World War, the "career" of the "Sekskeipen" came to an end. For the next 70 years, it was mostly stored in the boathouse at Ytrehus, now and again taken out for festive occasions. In 1991, however, the coastal society "Over stokk og stein" took an interest in the boat and took it out from its hiding place in the boathouse. It soon turned out that its buoyancy was still satisfactory, and the boat has since been used by the coastal society at various events and occasions.

After a while people found out that the "Sekskeipen" was too valuable to be used on longer expeditions. The coastal society, therefore, took the initiative to make copies of the boat, so they would get a boat that could be used, at the same time as they would learn about its construction and building technique.
This was by no means an easy job, but with help from boat-builders who had experience with building "oselvar" and "nordlandsbåt", two good copies were made. The copy that went to the coastal society was named "Knut", after the boat-builder Knut Kjelkenes. The other was named "Sunnfjord", and is today in use at the Viking Ship Museum in Roskilde, Denmark. In this way, the knowledge about this boat type will live on.