Osmundsvåg is located on the peninsula between the strait of Ulvesundet and Sørpollen, with the waters of Sildegapet to the north. On the northernmost point of this peninsula there is a small bay open to the south where the trading post of Osmundsvåg was located. Trade was started there about 1700 and was continued for two centuries. As was the case with so many other trading posts and inns, Osmundsvåg was also a court site. Now all the old houses are gone. 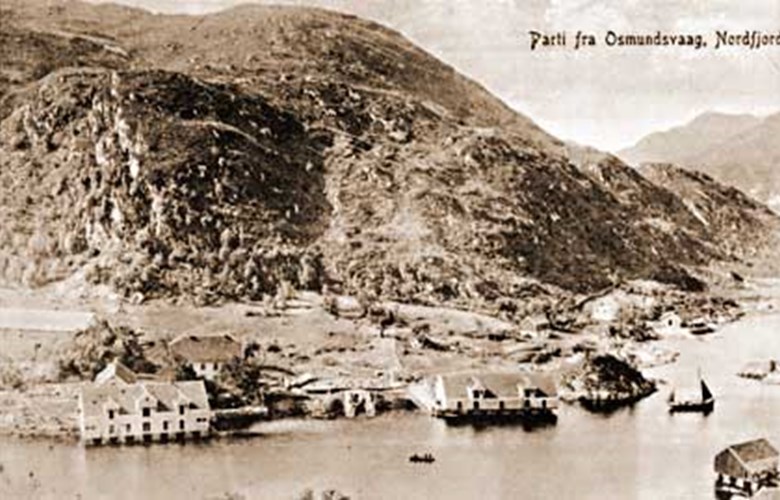 The trading post of Osmundsvåg with two big sea warehouses, "borgstove" (accommodation for servants and guests), and the main residence with its three storeys and 30 rooms. One of the sea warehouses was sold and torn down when the trading activities came to an end, whereas the other was destroyed by a spring tide. Down to the left in the picture is the building called "Sivertbuda" and the boat "Sjøbrodden".

The boat traffic along the coast passed through Ulvesundet. Osmundsvåg had a location which meant that for those who came from the south and were going further north past Stad, it was natural to make a last stop there before venturing north past this frequently treacherous and dreaded open waters. Those who came from the north could also do with a restful stop after the voyage around Stad and across Sildegapet.
The first trade citizen at Osmundsvåg was Hans Bang. He was born in Denmark and moved to Bergen where he got his trade citizenship. In 1796, he became the manager of the manor belonging to St. Jørgen's Hospital. In the same year he bought the trading post of Bryggja and settled down there. He immediately started to look for a more suitable place. He applied to start with trading activities at Osmundsvåg, and was warmly supported by the local people. In 1707, a royal decree granted him the right to do trade and keep an inn with accommodation, food, beer, wine and liquor for travellers. In 1709, he sold Bryggja and moved to Osmundsvåg. He would do most trade with people in the main parish in Selje and with people from the northern part of the island of Vågsøy, from Raudeberg to Refvika.

Several owners in the 18th century

Hans Bang ran the trade activities and the inn at Osmundsvåg for the rest of his life. When he died in 1734, his son-in-law, Johan Omson Røpche, took over. The following year Røpche got confirmation that he could take over the trading rights after Bang. However, already in 1736 Røpche sold the place to Didrik G. Fesser. In addition to the farm of Osmundsvåg, this property deal also included the right to fish salmon, a farmer's house and trading house, "jekts" and other boats with various equipment and gear, as well as the right to carry out trade and run an inn. The whole deal amounted to 1150 "riksdalar".
How long Fesser ran the trade and the inn we do not know for certain. However, in the deeds protocol for Nordfjord for the period 1758 to 1762, there is a reference to a deed after Birgitte Fesser. It is possible that it was Jon Flusund who then took over Osmundsvåg. In the deeds protocol for the period between 1781 and 1785 there is a deed after him.

From Larsen to Mowinckel

We know for certain that Hans Larsen owned Osmundsvåg in the late 18th century. Not much is known about this man, apart from the fact that he was married to Maren Malene Gundersen and that he died in 1813, 82 ½ years old.
In the 1801 census, Hans Larsen is referred to as the "father of the master of the household's first wife". It was his son-in-law, Johan Ludvig Mowinckel, who was then "master of the household, tradesman, and innkeeper". He had first been married to Berte Marie, Hans Larsen's daughter. She died in 1796, merely 30 years old. In 1799, Mowinkel married Mette Dortea Leganger. Margaretha Kramer, a niece of Mowinckel's, also lived with them. They had ten servants, of these there were four conscripted seamen. Johan Ludvig Mowinckel was a trader and innkeeper at Osmundsvåg from 1791. He died on 11 July 1805, and his widow, Mette Dortea, then took over the business activities. She ran the trading post probably until 1821.

Description of the place in 1814

In 1814, Osmundsvåg was described in the following way: "A big and impressive place, built in a square with four house lengths around an open yard covered in big tiles (?), an elegant residence with good rooms. In front and along the bay where the place was located, there were a high number of outhouses for servants and animals, as well as warehouses. In this isolated area, the place gives an imposing overall impression, like a castle in between farmers' houses."

Mowinckel's daughter, Maren Malene, married Nils Rønneberg from Ladeberget on the island of Valderøy close to Ålesund. In 1821, he got the deed for Osmundsvåg. His wife died in 1835, and Rønneberg then sold Osmundsvåg to Dankert Wiese who later became his brother-in-law. Four years later, Rønneberg married Anne Sophie Dorothea Wiese. She was also sister of Claus Wiese who owned the trading post Gjerde at Nordfjordeid. Rønneberg himself moved to "Nedre Berge" in Selje and ran an inn and carried out some trade there.
Dankert Wiese was one of the sons of the Bergen merchant Daniel Wiese. He had been a baker's apprentice in Bergen. In the same year that he bought Osmundsvåg, he received the right to run a general store and a liquor store, and he was also licenced to serve alcohol.
In 1865, 43 persons lived at Osmundsvåg. Dankert Wiese and his wife Didrikke Sophie lived with a daughter, Dorothea, and a foster daughter, Amalia. They employed a shop assistant and 14 servants, two of these were entitled house maidens. Four crofters' families lived there as well.

Dankert Wiese died in 1872, and in the following year, his son, Christian, got the deed. Christian Wiese had attended many schools and in 1869 he became a Master of Philosophy. Nevertheless, he took over as trader and innkeeper at Osmundsvåg. Wiese became the first sub-post office manager and shipping agent at Osmundsvåg. Later on he became mayor of Selje and sat on the board of directors for the steamship company Fylkesbaatane. Wiese is said to have been the first person in this county to try to produce canned food. In 1875, he started up this canning activity, and the following year his crab and fish canned products received honourable mention at an exhibition in the USA. However, the canning activities came to an end in the 1880s.
As early as in the 1860s, the place had had some unscheduled boat stops, but it was only in 1877 that we find Osmundsvåg in the timetables of Fylkesbaatane. In that year, the place was a so-called *stop - meaning that the ship stopped only if there were goods or passengers - on the southbound voyage. On 15 August the same year, a sub-post office was established at Odden. About 1890, the place was included as a regular stop for a boat service Selje - Florø - Førde. In 1892, the sub-post office was moved to Sandvik and the name changed to Barmen sub-post office, but at Osmundsvåg, a minor post office was established with Sivert Johnsen as manager.

The houses stood until 1956

Christian Wiese went bankrupt in 1890 and moved to Kristiania (Oslo). The following year, Ole Pedersen Fure bought Osmundsvåg at an auction. First he ran the place until 1897 when Jakob Larsen Halsør took over for a year. Fure took over the business again in 1898. In 1894, Fure became shipping agent for Osmundsvåg, a position he held until he died in 1927. In addition, he ran the farm Osmundsvåg and carried out some fishing. However, the place had gradually lost its importance and was surpassed by more rapidly developing places. This was due to improved conditions for running trade activities as well as changes in the communication structure along the coast. After 1927 there was no longer any post office at Osmundsvåg.
The elegant houses stood, remnants of bygone days and the golden age for Osmundsvåg. A major fire in 1956, however, reduced all the houses on the old trading post, inn and court site to ashes.