Nedbergo is located on the eastern side of the Aurlandsfjord, 300-400 metres northeast of Undredal. It is a steep climb up from the fjord, about 540 metres above sea level. There is a sloping cultivated field with good topsoil and good growth conditions, but the soil may become too dry. There are three mountain farms to the east and south in the mountains; "Heimestølen", Vassete og Nisedalen. The farm has hunting rights for deer and reindeer. 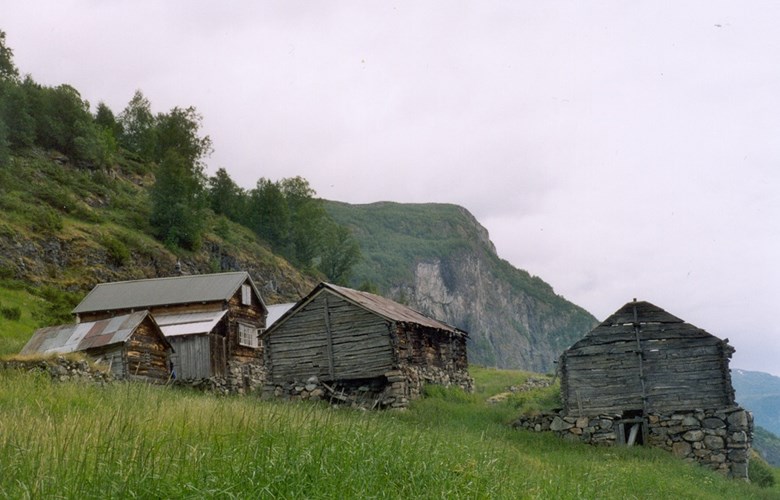 The farm was cleared in ancient times, perhaps long before the Viking Age. After the Black Death in 1349/50, the farm was deserted until about 1600. In 1666, one family lived there, and they harvested six barrels of grain and they had 12 cattle. However, the 17th century was a hard period for the small and marginal farms. When the smallholder Nils Pedersen died in 1698, he left behind 46 "riksdalar" but the proprietor, Torbjørn Vinjum, demanded 43 "riksdalar" in land tax.

The decades before and after 1800 were good years for most farms. New land was cultivated and the population grew. The cultivation of grain became more important as this yielded a higher food production than husbandry. In 1845, they harvested 12 barrels of grain and 42 barrels of potatoes. Two families with 15 persons lived on the farm and they had 12 cattle and 41 sheep and goats. In 1869, they had close to two acres of cultivated fields and close to nine acres of hayfields. Slightly more than one third of the fodder - hay and foliage - came from outlying areas. 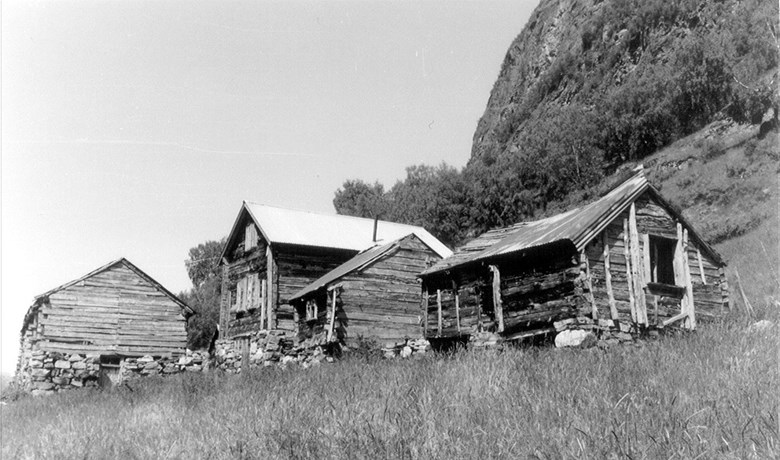 In the area from Nedbergo and out towards the valley of Nordheimsdalen and the hills of Frønningaåsen bears were plentiful in former times. One night the bear approached the farmyard and attacked a stallion. The bear had paid them a visit earlier, killing a heifer. Now there was a fight of life and death. The horse had shoes with spikes on and it struck with his fore legs. In the morning they found the dead bear on the ground with its coat torn to pieces. The furious stallion was running around in the farmyard.

The summer farm is located a half-hour walk from the farm, and the mountain farm of Vassete lies further to the south at an altitude of 1100 metres. Vassete has nice, flat pastures. In the 19th century, the farmers at Nedbergo bought a mountain farm called Nisedalen from the farm Kvam. This is located in a narrow valley facing south towards the Aurlandsfjord and the village of Aurlandsvangen.

Nedbergo has hunting rights in the Nordfjella reindeer area. In the mountains between Aurland, Lærdal, Hemsedal, Ål, Hol and Ulvik the game population of reindeer numbers close to 2000. Sometimes flocks of reindeer migrate far to the north, close to Nedbergo and the Aurlandsfjord. In recent years, the population of deer has increased much. The owners of Nedbergo and Kappadal have the right to shoot five animals. 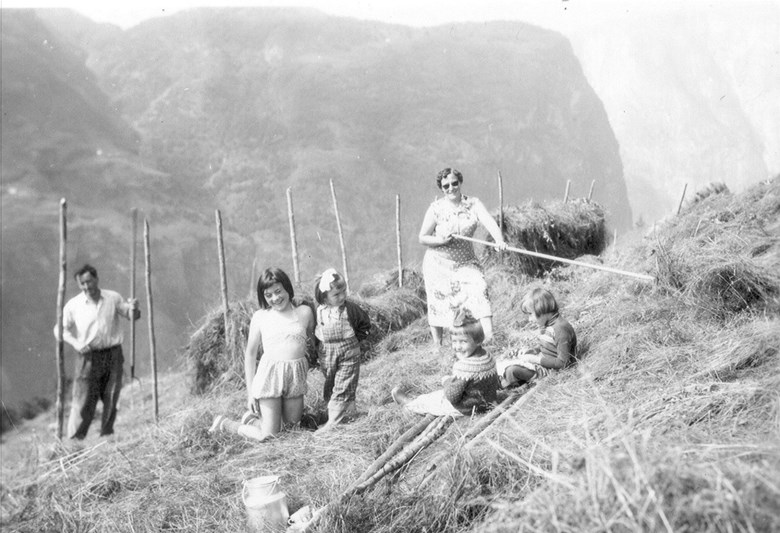 Nedbergo faces southwest, and the sun warms nicely in spring. For this reason, vipers are quite plentiful. The road up to the farm is steep and cumbersome, and in 1931, an aerial cable was mounted below the farmyard. Because of this, they no longer had to carry the goods from the farm down to the sea. In 1936, a cableway with two wires was mounted. When one wagon went down the other was on its way up. After 1900, the people of Nedbergo stayed at Undredal in the winter months. In the summer months they led their animals up to the farm again. The farm was operated until about 1960.

Nedbergo seen towards the north. To the right is a sheep shed, then a "stabbur", and furthest to the left is the main house, all belonging to holding #2. This holding was separated from the main farm about 1830.
Owner: Aurland kommune - Date: Kring 1950 - Photographer: Ukjend
Aurland kommune
Kring 1950
Ukjend

Lars B. Nedberge (1891-1977) carrying a rock to be put on the cableway wagon. A two-way cableway was mounted in 1936. Then they often sent rocks down to the fjord, and goods were thus pulled up to the farm.
Owner: Aurland kommune - Date: Kring 1940 - Photographer: Ukjend
Aurland kommune
Kring 1940
Ukjend