The hamlet of Stalheim

The hamlet of Stalheim consists of the farms Stalheim, Brekke, Sivle and Sivlesøy in the municipality of Voss. The hamlet can be looked upon as a gateway to the valley of Nærøydalen and the area included in the World Heritage Nærøyfjorden. The name Stalheim is probably linked to the steep hillside called Stalheimskleiva, meaning "the farm at Stadall", derived from the verb "standa, stå" (stand). 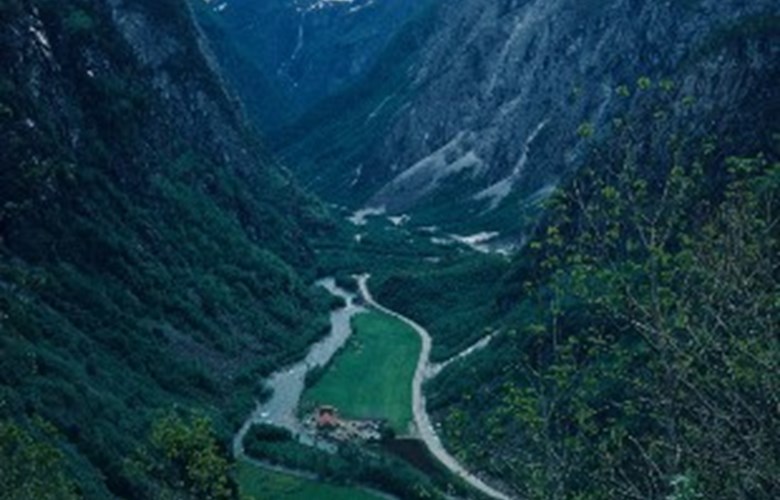 The Stalheim hamlet is the gateway to the narrow valley of Nærøydalen.

At the Sivle farm we can trace the settlement back to the early Iron Age by means of archaeological finds. At holding #1 at the farm excavations were made in the early 20th century of the so-called "Kjempehaugen" (the gigantic mound), northwest of the farm towards the river. Two graves were found in the mound. One contained belt stones, weapons, tools and harness for horses which can probably be dated back to the Age of Migration (400-600AD). The belt stones were carried in the belt and were used to kindle fire by means of striking a sharp, pointed iron tool against them. The other grave in the mound was probably plundered earlier as the grave objects were lying in a mess. However, the contents of the grave indicated that the person must have been buried there some time in the younger Iron Age. The grave from the Migration Age is the oldest find in the hamlet so far.

The famous Norwegian writer and poet Per Sivle was born in 1857 at Flåm, but spent most of his younger years at Brekke, the neighbouring farm of Sivle. Per's life was marked by tragic events. His mother died when Per was only two-and-a-half years old. As his father was an itinerant cattle trader, Per was raised by relatives. At the age of six he came to Brekke where he experienced some good years. Later in life he was frequently ill, his eyesight was impaired, and he had bouts of depression that had negative effects on his writing. One bright spot in his life was his wife Wenche von der Lippe Nilsen from Bergen, and their daughter born in 1888. At the early age of 47, on 6 September 1904, Per Sivle committed suicide.

His writing is well known to many generations of Norwegians, where the most beloved pieces are the song "Den fyrste song eg høyra fekk" (The first song sung to me) and the story "Berre ein hund" (Only a dog). In his poems he often portrayed the down and out in society and events from the hamlet where he grew up.

The story "Berre ein hund" deals with a collie that tries to save his English master who was killed when he tried to reach the so-called "Dragon's lair". The "dragon's lair" is a cave in the rock on the way to Jordalen along the lower part of the mountain Jordalsnuten which used to be completely isolated. The road by way of Nåli was the only passable summer road, where a wire served as a protection against the precipice below. According to the legend, the cave was the lair of a dragon with seven heads, each symbolizing the seven valleys that could be seen from the top of the mountain.

The road between Voss and the valley of Nærøydalen

In his booklet "Hotel Stalheim og Nærødalen", probably written some time in the early 20th century, professor Dr. Yngvar Nielsen describes the road between Voss and Stalheim as a track only fit for goats. "It was one of these roads that made people frequently say that the goat was the country's first road builder. For this reason travellers preferred not to use the road by way of Voss and Stalheim when they were heading from Bergen for eastern Norway." This route between eastern and western Norway has been a particularly important artery since time immemorial, but the road was only regulated in connection with the establishment of a postal route between Christiania (Oslo) and Bergen in 1647. Along this route some farmers had the responsibility of transporting the post, and one of these was the farmer at Stalheim.

We know that Stalheim functioned as a posting station and inn already in the Middle Ages. The volume of traffic along the postal route formed the basis for the posting station. In 1885 Johann Andersen moved his hotel operation from Voss to Stalheim. The hotel had at that time actually room capacity for 150 guests. The hotel became quickly renowned both in Norway and abroad for the excellent standard and the magnificent view. Among the famous guests in this pioneer phase we find Kaiser Wilhelm II. One of his favourite viewing points - Wilhelmshøi - is in fact named after him. A memorial stone has been erected at this place with the inscription "In memory of Kaiser Wilhelm II's visit to Stalheim". The present hotel building is the fourth hotel generation at Stalheim.

Hiking trails in the hamlet

A fine walk from Stalheim goes to the croft called Nåli, belonging to the Sivle farm. The place is located on a ledge in the mountainside along the old road between Stalheim and Jordalen. The walk takes about an hour in a dramatic and majestic landscape. The hiking trail has been improved and made safe and has become an exciting attraction for locals and tourists alike. Another hiking alternative is to walk the old royal road to Stalheim before the new road was built at Stalheimskleiva between 1844 and 1849. The hike to the waterfall takes about 15 minutes. Wheelchair users can also use this trail.