Styvi is one of the four hamlets or main farms along the Nærøyfjord. It consists of two farms and the "spring farm" of Hølmo. In addition, the farm has the right to have a mountain farm and pastures at Hjølmo and Vassete at Dyrdal, on the opposite side of the fjord. Before the Nærøyfjord area was designated as a world heritage site, a landscape protection area was established from Styvi to Holmo in 1991. 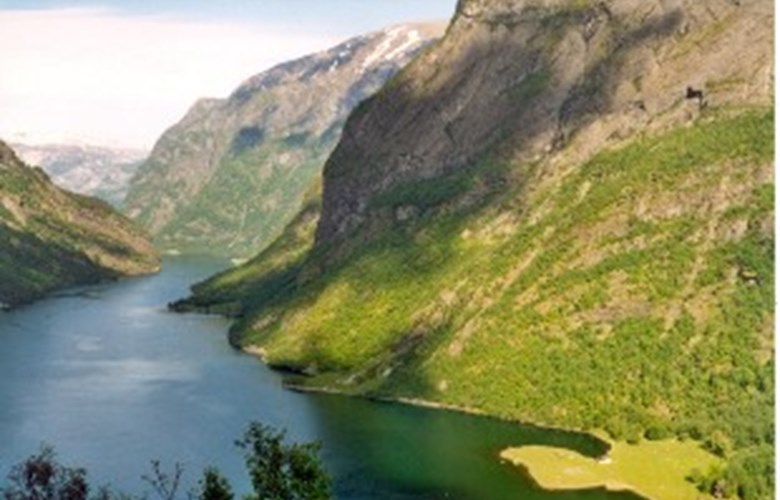 A general view of the infield and outfields at Styvi in 2002. In the foreground is Holmo, in the centre of the picture is the point of Ornes, and the green spot in the distance to the north is Skalmones. The farmyard is located under the white mountain a few hundred metres south of Skalmones.

The farm name of Styvi

In Oluf Rygh's "Norske Gaardsnavne" (Norwegian farm names) we can read that Styvi has been written in a number of ways throughout the centuries: Styffuenn in 1563, Stiffum in 1603, Stiffuenn in 1611, Stiffue in 1667 and Stive in 1723. Rygh interpreted the name to be a composite of "stúfr"- (=stump) and -"vin" (=meadow), meaning the stump of a tree. Other name experts think the name describes the topography of the farm with its narrow, long fields. 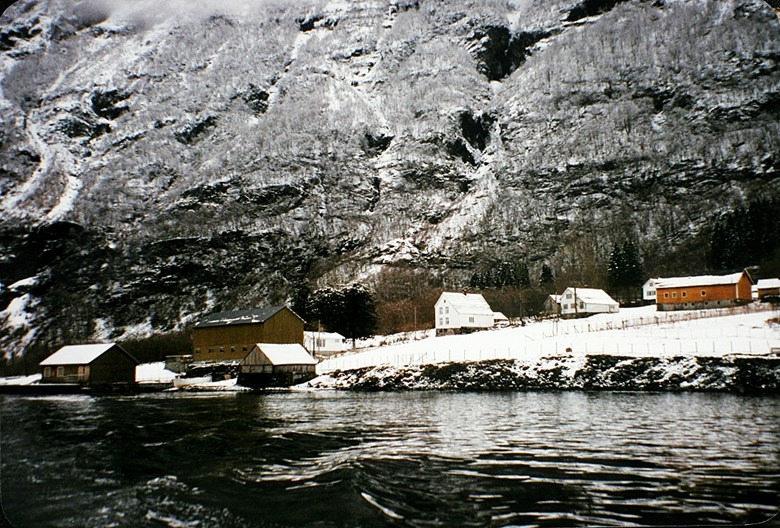 From prehistoric times at the farm

At the private farm museum there are prehistoric axes, made both of stone and iron. There is also a permanent prehistoric cultural monument at the farm. This is a huge burial mound with a diameter of 15 metres and a height of 1.5 - 2 metres. In the centre of the mound there is a big hollow caused by digging. Legend has it that the wealth of the farm Tufto comes from this burial mound, but this is hardly likely. The mound is placed in an open area on a flat point at Holmo with a commanding view of the fjord. The location may indicate a wish to control the sea-lane along the fjord, and this is typical of mounds built in the Bronze Age (1800 - 500 B.C.). As the only remains from the mounds are some rusty lumps, we cannot be certain of the dating of the mound. Nevertheless, the mound bears witness to the fact that there was a settlement in the vicinity in the Bronze Age or Iron Age.

From one to two holdings

There is reason to believe that Styvi was settled before the Black Death, and that the farm was cleared by people from Dyrdal. This may explain why Styvi has the right to a mountain farm and pastures on the opposite side of the fjord at Dyrdal. After the ravages of the Black Death, the farm was once again cleared in the 1530-1540s. From this period until the 18th century, more and more land was cultivated with increased land tax imposed upon the farm. In 1763 the farm was divided into two holdings, most likely because the conditions at the farm were favourable enough to feed two families.

When the Norwegian postal service was founded in the 1660s, a postal route between Bergen and Oslo was established, virtually following the line of the present main road, with the exception of the long tunnels between Gudvangen and Lærdal. In the months when the fjord was free of ice, the post was transported by boat between Lærdal and Gudvangen. When the ice covered the inner part of the fjord, the post was carried along the road from Gudvangen to Bakka, transported across the ice-covered fjord from Bakka to Bleiklindi and then along the postal road to Styvi. From this period the Styvi farm museum has among its many exhibits a specially made vessel, a combination of sled and boat. The 5.5-kilometer-long road thus became an important link in the postal route between Bergen and Oslo, and it is still preserved in the form of trail for people and packhorses. The road has now been restored and has become a highly popular hiking trail for tourists and local people alike.

On 18 October 1991, the Directorate for Nature Management established the Styvi-Holmo landscape protection area, based on the unique and well-preserved cultural landscape, its vegetation and the old postal road. The area around Holmo is held to be of special value with its foliage fields, pollarded trees, as well as the "spring farm" buildings. The postal road is also an important element in the landscape protection area. It follows the shoreline along the fjord and is partly built with stonewalls and bolts. The stonewalls are a nice feature in the landscape, but are very much exposed to the high waves from the cruise liners. This means that the road needs to be maintained on an annual basis. To reduce the risk of wave damage to the stonewalls and the shoreline in general, a maximum speed limit has been enforced for traffic on the fjord. Inside the protection area is the river of Nisedalselvi which is protected against any hydroelectric development.

For Botolv and Kjellaug Hov, who owned the farm and wanted to keep on with the operation, the protection of the area caused much frustration. At the same time as the protection implied major restrictions on the use of the area, there was no compensation for any loss of income. Fortunately, they did not give up.

After the establishment of the landscape protection area, the use of the postal route as a hiking trail picked up considerably, leading to more visitors to Styvi. In 1993 the couple opened up their private farm museum and café. In the café visitors are treated to Kjellaug Hov's famous waffles served with jam and sour cream. The museum contains a large collection of implements and objects from farm life in former times. Botolv Hov himself masters many handicrafts, such as spinning ropes from linden bast, producing spoons of horn, as well as making bells for cows, sheep and goats. He is an ardent spokesman for keeping up and passing on these handicraft traditions.