On the boundary between Øvre (Upper) Standal and Nedre (Lower) Standal there is a road stone monument. The year 1904 and the number 230 are carved into the stone. In the autumn of 2003, Odd Standal in Florø sent a photograph of the stone to the County Archives with some supplementary information. This marked the beginning of a small project of co-operation, resulting in an article on the road stone monument and the road to Øvre Standal, as well as providing some information where it is possible to find written source material on road history. 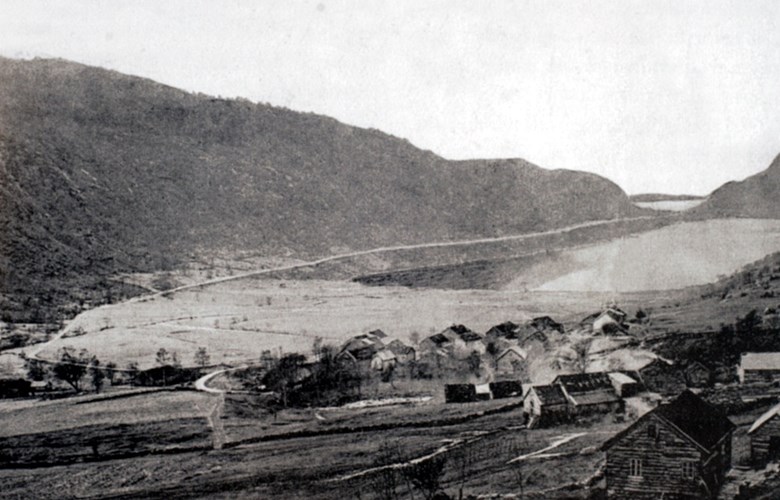 Øvre Standal and the lake of Standalsvatnet. The picture can be dated to the years after 1905 based on the newly built road in the background (completed in 1905).

An appreciation for road boundary markers

It is still quite common to mark boundaries, whether they are between counties, municipalities, using carefully made markers of various material. Most commonly seen nowadays, is most likely colourful signs in aluminium, but there are also some markers made of concrete, and even natural stone. We can also see that road-builders of today from time to time raise monument-like stones, for example on the road between Florø and Førde, just to the west of Eikefjord. It may look as if these stones have been found during the road construction work, having a shape that simply was an invitation to raising it along the road. It is nice to notice that modern road builders have an eye for this, and that the appreciation for boundary markers is still very much alive.

On the boundary between Øvre and Nedre Standal in the present municipality of Flora, there is a more than 100 years old boundary marker. It was raised when the village got a new road in the early 20th century. The village was then a part of Kinn municipality. Later on, it became part of Bru, and eventually Flora. 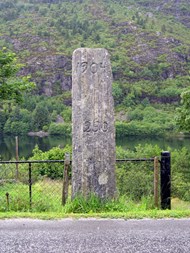 The stone measures about two metres in height and 40 centimetres in width. Previously there used to be a similar, somewhat smaller stone a few hundred metres further to the west, but this is no longer there. These stone markers are not erected to commemorate important persons or disasters. Rather they are silent witnesses of people who have had an eye for form and found satisfaction in their own manual skills. Machines take care of the heaviest work nowadays, but stone workers are still stone workers.

Anton Holm (born 1915) grew up a few hundred metres from this stone. He remembers from his childhood that the used to play with the children living in the house on the opposite side of the road where the stone was located. He is sure that the stone never had any name. He also recalls that the maintenance of the rural road was carried out by the farmers along the road.

After the parcelling of the cultivated land in 1911, most properties had land on both sides of the road. The road was built in 1904, in other words, before the parcelling of land was carried out. At that time, the tenant farmers of Øvre Standal lived in a cluster farmyard, and the road maintenance must have been divided among the farmers according to a different system than by property boundaries.

The stone is located on the boundary between the two farms of Øvre and Nedre Standal, and it is likely that the stone marked the boundary showing how far each of the tenants of the two farms had to carry out their maintenance duties.

Roads have always been a recurrent issue on the local council agendas. Both in the records and archives of the municipal council / the board of aldermen, much road history can be found. One case in point was when the road to Standal was on the agenda of the Kinn local council on 6 March 1884 (and many times later). In the minutes we can read the following:

"Letter from Mads H. Standal, in which the municipal council is requested to contribute to the construction of a road from the sea to Øvre-Standal. Unanimous decision: The municipal council is positive to this request so the tenants of Øvre-Standal can get the road built. Consequently, we ask the Public Roads Administration to survey the distance from the sea up to Øvre Standal, and also to make an estimate of the cost of the road construction, based on a road width of three ells (six feet)."

"Letter from the two committee members, D.S. Langeland and Andreas A. Standal, who were appointed by the municipal council to inspect the constructed road from Øvre Standal and down towards the sea. The committee came to the conclusion - to the best of their judgment - that the road was in such a good condition that the municipal authorities could take over the maintenance of the road."

Note: The road was not quite completed in 1905.

The Standal road was on the agenda for the county council in 1895, and a number of times later. The minutes show that the county engineer had prepared the case. There was a reference to a contract with the tenant farmers concerning their part in the project. The cost of the road project was estimated at 3,646 kroner. A short part of the road is needed from the sea up to the "plateau" of the lake of Standalsvatnet. The longest stretch of road will have only an insignificant or no gradient.

The farm Standal has 12 tenants with a total land or property tax of 24 Marks. Without road, they have a "very cumbersome access to the sea". The county engineer recommended a county allocation spread over five years.

The archives of the Public Roads Administration at Hermansverk

The early archives from the national Public Roads Administration in the county of Sogn og Fjordane is stored at Statens Vegvesen, Region West, district 6, at Hermansverk. The archives are ordered and filed by people from the regional state archives in Bergen.

A comprehensive file entitled Vegen Standal-Sjøen contains profiles showing lengthwise and cross sections, in fact, showing the road metre by metre, letters and documents of all kinds: on planning and projecting, on financing, on the work and workers, and many other things.

The documents reveal that the road project was postponed several years. The surveying only took place in the autumn of 1901, and the work on "akkord 1" (piecework contract 1) - the innermost section - was started on 24 April 24 1902. G.M. Hjelmeland (from Ytre Hjelmeland in Gaular) was supervisor (and a busy letter writer). Mads H. Standal was in charge of keeping the accounts for the road work.
In midsummer 1904, they had completed the road up to and including "akkord 25". In the autumn of 1905, the municipal authorities took over the maintenance of the completed section of the road, and on 15 December 1906, the supervisor Hjelmeland sent the following letter to the county engineer:

"Tonight I have the pleasure of reporting to you that the road project from Øvre Standal down to the sea in Kinn is now completed, and has been covered with gravel from marker 254 to marker 364 which marks the end of the road. The accounts will be sent from my home as soon as they are completed. Tonight I leave from here to go home. All is well."

All is well - as long as it lasted. On 8 January 1907, a river flood damaged the northern pier of the bridge "Standals bro". Hjelmeland was asked to go there to assess the damage and report back to the county engineer. He reported this about the flood: The river flood, referred to earlier, had been awfully big, indeed, old men say that they have never seen such a big flood there."

This road marker, with the year 1904 and the number 230, stands on the boundary between the farms of Øvre and Nedre Standal, about one kilometre from the sea or the quay at the bay of Standalsvika. The year 1904 may indicate the year the road was completed to this point from the upper part of the valley in 1904; the other number may mean road marker #230.
Owner: Odd Standal - Date: 2003. - Photographer: Odd Standal
Odd Standal
2003.
Odd Standal