A variant of the traditional folk dance "springdans" is the Solund "springar". This dance, and fiddle music written down after fiddle players in western Solund, is very popular when Vidar Underseth from Solund performs at national competitions, or at events abroad. 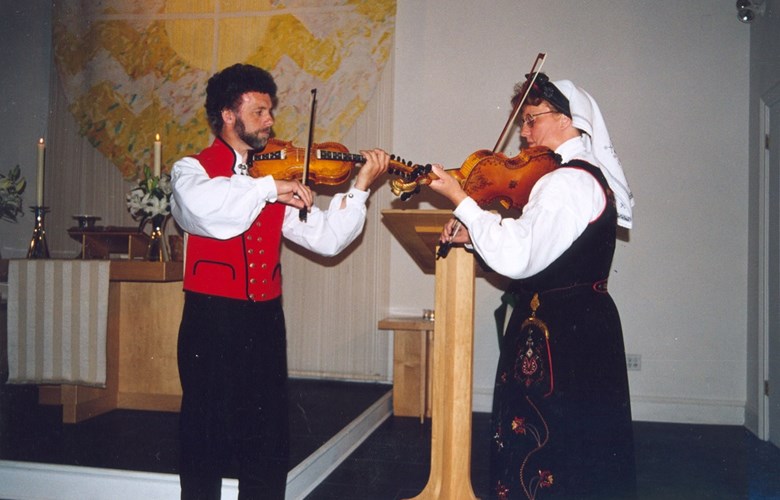 Leikny Aasen and Vidar Underseth performing a wedding dance after Edvard Staumen, Solund, in the Norwegian Seamen's Church in New York, in August, 2000, in connection with a church service.

The "springar" held its ground in the competitions

In the 18th century, the most popular dance in the coastal areas was the three-beat springar, which the "springdans" was called in Solund. The two-beat "halling" dance was also used. In addition to these, there were some wedding dances, f. ex. the "langedans" or the "endeløysa", where the fiddle player ran in front with a long line of dancers after him. "Runddans", such as the "reinlendar", "springpolka", and the waltz, came later in the 19th century and soon gained popularity. This music was well suited for the accordion, which came into use around 1900. The "springar" held out best of the old dances and was common at weddings and other functions where there was dancing, much because it is associated with the fiddle, which had such a long tradition at weddings.

In western Solund, particularly, there were many competent fiddle players. Best known was Peder i Straumen (1854-1944). He was also the best source for the collector of dancing tunes and the fiddle player Arne Bjørndal. Bjørndal's wife came from Straumen, and he wrote down many tunes after Peder, also a "langedans". In addition, the Bjørndal archives in Bergen have recordings and manuscripts of dancing tunes by Herman Straumen, Peder's son. "Bånsullar"(songs for babies) and "slåttestev" (haymaking songs) are included.
Fiddle players from Solund were at the fair at Lærdal, where the champion fiddle players also performed, and it was common practice to swap music. Bergen was an important place to meet and trade as well. Several fiddle players from Solund used "harding" fiddles (a unique fiddle with four under-strings) made by Anders Heldal (1811-1897) in Bergen.

The "springar" has a local dialect, as does language. There are film shots showing around 13 variants from the far west to the far east of the Sogn district. The differences are in the way the dancers hold each other, and in the way they turn.
In 1975-1976 film shots were made of senior Solund people who danced the "springar" and knew the dance well. A group of younger dancers, headed by Vidar Underseth, were in Trondheim in 1987 (sponsored by the council for folk music and folk dancing), where they wrote down and learned the Solund "springar", and they used the dance later. Vidar Underseth later on, in 1990-91, carried out a collection project, with interviews and film shots. Thus the Solund "springar" became well documented.
Vidar Underseth has danced the Solund "springar" at competitions since 1988. His partner at the competitions has been Leikny Aasen, and at other events, Hilde Bjørkum.

At the national competition at Nordfjordeid in 1990, Vidar Underseth won class B and was thus qualified for promotion. In class A he has done well. He won third place in the national competition at Voss in 2000.
As a professional musician in the employment of the county (the "harding" fiddle) and a member of Ålesund spelmannslag (traditional music association), he has had the opportunity to perform country airs from Solund nationwide and abroad. He has visited France several times, f. ex. for the thousand-year anniversary of Gange-Rolf (Rollo of Normandy). He and Hilde Bjørkum have visited Botswana, where they performed the Solund "springar" in a tent far out in the Kalahari desert! With stately chiefs in the audience. 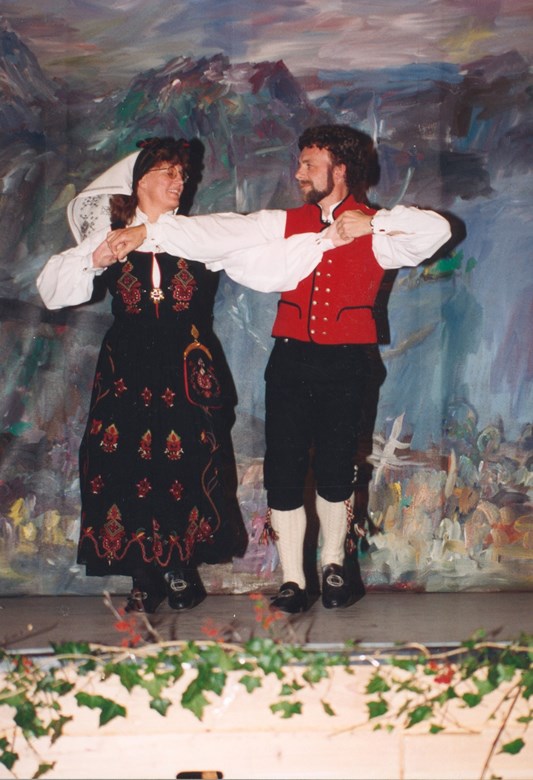 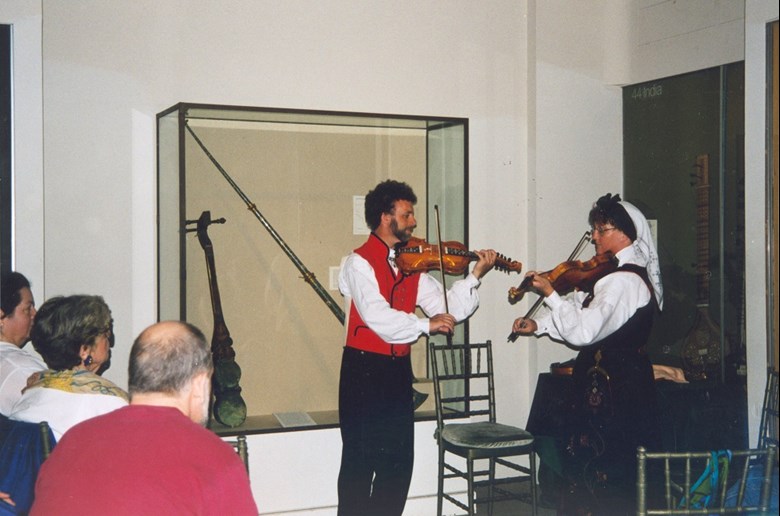 Pass on the tradition

Vidar Underseth has performed the Solund "springar" in Poland and in the USA. On several occasions, he has visited the USA, where he has played and danced in the east and in the west. In the Mid-West, Vidar Underseth and Leikny Aasen in 2000 gave a course in the Solund "springar". In that same year he was in Sablé in France as a visiting instructor in dancing and fiddle playing. And in Paris he made a recording of "harding" fiddle music at Radio France. In this recording he included several tunes from Solund.
In competitions and in concerts Vidar Underseth finds it natural to perform tunes he has learned from Solund. He travels constantly, teaching young people to play the "harding" fiddle, and, more often than not, he teaches them some tunes from Solund while he is at it.

Competition at Sandane in 1993, Leikny Aasen and Vidar Underseth performing the Solund "springar". Vidar is also a "halling" dancer which is actually the title he uses in the telephone directory! He dances the "halling" in class A both with a partner and solo. He has won the national competition three times with Hilde Bjørkum, in 1989 they received the King's Cup. Twice he has won second place in solo "halling" dancing at the national competition.
Owner: Vidar Underseth. - Date: 1993. - Photographer: Ukjend.
Vidar Underseth.
1993.
Ukjend.

Among Stradivariuses and a large collection of different instruments from around the world, Leikny Aasen and Vidar Underseth give a concert at the Metropolitan Museum of Art in New York.
Owner: Vidar Underseth. - Date: 2000. - Photographer: Ukjend.
Vidar Underseth.
2000.
Ukjend.

Vidar Underseth in Solund in 1998, giving a concert with some pupils. The "harding" fiddle in the picture was made by Kolbein Oppedal in 1970. Kolbein came from Oppedal, but lived in Bergen at this time. On his travels Vidar makes a point of passing on information about the old fiddle players in Solund, such as Arne i Vika (Kvalvik), who rowed all the way from Nautøy to Lavik to play at a wedding. And about Per på Neset, who played at a wedding as a 14-year-old and had to ask the vicar for permission!
Owner: Vidar Underseth. - Date: 1998. - Photographer: Finn Hugøy.
Vidar Underseth.
1998.
Finn Hugøy.
resources:
Vidar Underseth på lydband til Hans H. Steinsund.