Bulandet is situated on the ocean westernmost in the municipality of Askvoll, comprising ten small islands. The trading post of Kjempenes, where the inn and the general store were situated, is on the island of Musøya. This island is situated between Hillersøy to the south-west and Nikøy to the north-east. The other islands are concentrated in a north-westerly direction from Kjempenes. 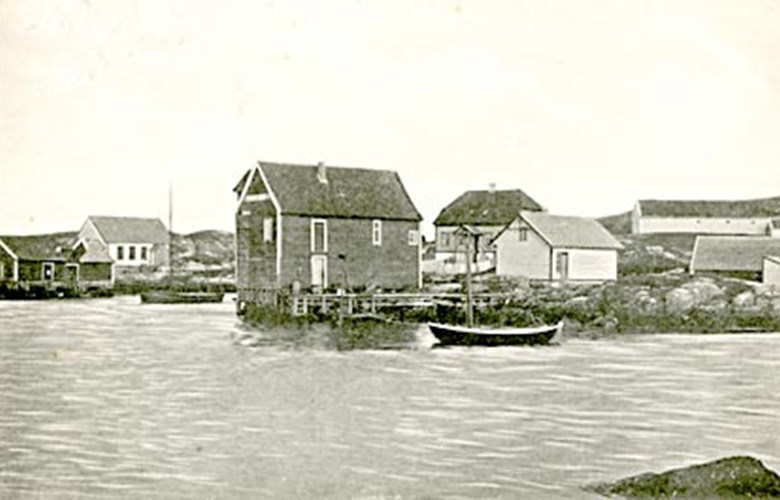 Bulandet needed a trading post and an inn when the fisheries grew in importance for the people along the coast. Kjempenes was a trading post from 1740 until after 1850. The picture shows the place in 1909, a long time after the trade had been closed down. A new chapel was built in 1906, but the bell and the steeple remain.

As early as in the 15th century a chapel was built on Musøya, Bue Capel. It was probably built because the distance to the parish church at Vilnes was long for the people on the islands westernmost on the ocean. In seasons with good fishing, a great many people came there. They needed to hear the Scripture, the vicar thought. He considered it his duty to see to it that decent behaviour prevailed.

As the fisheries expanded, and an increasing number of people participated, a demand for accommodation at Bulandet arose. Some took lodgings in private houses, but the number of people who arrived for the spring herring fishery created a demand for commercial accommodation. So a licensed inn at Kjempenes was established. It was also possible to buy beer and brandy there. The trading post bought the fish which the farmers did not need, and sold grain, salt, cordage, fishing equipment, and other commodities in demand.

Originally it was the innkeeper at Korssund who was licensed to provide the farmers at Bulandet with commodities during the fishing seasons. But in 1740, Jan Anderssen Luth was licensed to trade there. He was in conflict with the innkeeper at Korssund. Luth's son-in-law, Didric Ellertsen, took over in 1766. In December 1781, when Madame Ellertsen owned the place, a French privateer anchored up at Bulandet. When the captain went on a trip to Bergen, the crew made life difficult for the innkeeper and other people at Bulandet. The gesell (apprentice), Per Abrahamsen, was threatened to be killed with a knife, and forced to serve them beer and brandy free of charge. They are believed to have shot three sheep at Nikøy and the same number at Gjelsa. A bigger cattle was shot and injured by a shotgun. Windowpanes were broken and houses vandalized. The people sent for the bailiff for assistance. The ship is believed to have visited Husøy in Solund and played havoc there in the same way.

In 1786, Jan Ellertsen took over Kjempenes after his mother. He lived in Bergen and let a gesell (apprentice) run the business. In 1801 Knud Amundsen was gesell. He had four servants and a maid working with him. From 1811 to 1824 Morten Görbitz Kjempenes and after him Madame Erpecom owned the business. Petter Rosendahl bought the trading post in 1834 and operated a general store until 1852.

On Mary Mass Sunday in 1813, the last church service was held in Bue Capel. The owner was Johannes Mossesen at Korssund. He concluded that the chapel was in such bad repair that it was dangerous. Mossesen had it torn down without permission, and a law suit followed. His intention was to rebuild, he contended, yet he had the timber and the tile transported to Korssund and had a sea shed built there. Only in 1896 was the work on a new chapel started. In 1906, it was almost finished, but the bell for the steeple arrived only in 1913.

The people at Bulandet waited a great many years before Bulandet was included in the schedules of the Fylkesbaatane (steamship company). At first there was only one extra stop during the fisheries. In the 1880s, Kjempenes was entered in the schedule. A stop at western Bulandet was dismissed by the board, but an extra stop during the herring fisheries could be arranged. When plans were made for a postal office at Kjempenes in 1990, regular stops became more realistic. But time passed, and the people of Bulandet had to work hard for its implementation. In 1902, Bulandet was a stop on the route Bergen-Nordfjord. The numbers for 1904 show 141 passengers travelling over Bulandet on the Fylkesbaatane boats.

Time off on Sunday

In 1952, people from Bulandet demanded better service from the Fylkesbaatane. Sigurd Løkeland was sent to Bergen to present their cause. One point was they wanted the scheduled arrival on Saturday night moved 24 hours to Friday, so that unloading on Sunday could be avoided. As it was, shops and the postal office had to be open for business on Sunday as well. If the Fylkesbaatane could not change this, the people from Bulandet would have to find other ways to transport goods there. The Fylkesbaatane manager Otto Røsberg quickly made changes in accordance with the demands from Bulandet. After this they had time off on Sunday at Bulandet.

The environment has changed much at Kjempenes. Only the servants' cottage stands as it did when the place was a trading post. The residential building and the sea warehouse have been preserved, but both have been extensively rebuilt. Remnants of foundations of buildings which were once there is a distinct trait of Kjempenes.

The trade and the inn at Kjempenes came to an end in the 19th century. In the censuses of 1864 and 1900, no traders or innkeepers are recorded. In 1903, Nikøy AS general store started up. This business comprised general merchandise, a tannery, fish packing, and an oil storage. In addition, there was a whaling station. The company is, 98 years later, still in business as a general store and fishing reception. S. Gjørøy general store was started up in 1939, but has been closed down.

Fishing and fishing industry are the main economic activities at Bulandet and have given people financial security. With time some investments in tourism have been made. Cottages for rent and fishing holidays, Bulandsferie, are new ventures. "Bulandet temapark" is a museum where fishery and everyday life, past and present, are exhibited.

Some 250 people are living on the islands of Bulandet. There are municipal institutions such as a nursery and a school. The electric power supply to the islands have at times been unstable. The cable from the mainland has been cut. Fresh water has also been a problem. In periods with little rain, water is short, and people are asked to be economical. This is a handicap for the fishing industry, which depends on electricity and fresh water in their production.

As long as the fisheries are fair, people will have a good life at Bulandet.

Herring fishing a short time before the Second World War. Hundreds of boats from along the Norwegian coast arrive to participate in the rich fishery. In the background the old general store can be seen, which was replaced by a new shop around 1970.
Owner: Herman Midtbø/Fylkesarkivet i Sogn og Fjordane. - Date: 1930-talet. - Photographer: S. Halsøy.
Herman Midtbø/Fylkesarkivet i Sogn og Fjordane.
1930-talet.
S. Halsøy.