The actor Alfred Maurstad (1896-1967) was born and grew up at Bryggja in the western part of Nordfjord. The home of his childhood was the smallholding called Tuftene, located in the sloping terrain down to the bay of Maurstadvika. The house is privately owned and is not open to the public. Arthur Klæboe paid a visit to Tuftene in 1966 to record a radio interview with Maurstad. 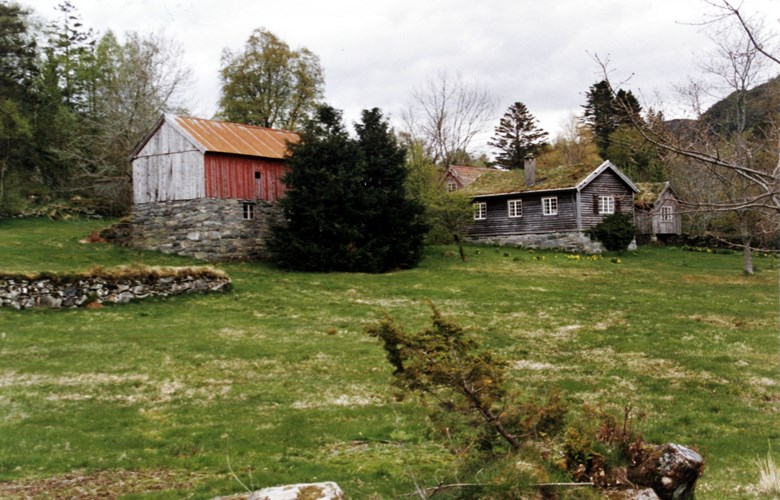 Alfred Jentoft Maurstad was born on 26 June 1896 at Maurstad in the present municipality of Vågsøy. His father was the farmer and fisherman Brynneld Olsen Maurstad (1859-1943) and his mother Lovise Marie Brølos (1867-1943), born at Tjøtta in Nordland.

Alfred Maurstad learned to play the Harding fiddle at an early age, and he also took part in plays. At 18, he left for Bergen to attend a subordinate officers' school, and a short while afterwards, he made up his mind to become and actor.

He made his debut at "Det Norske Teateret" in 1920 in the role as Gudleik in the play "Læraren", and he came to "Det Nye Teateret" in 1928 and "Nationalteateret" in 1931. His breakthrough came in his role as Peer Gynt in 1936 and two years later as Vrål in "Driftekaren", two of the most impressive Norwegian theatre performances in the 1930s. After the Second World War, he was theatre manager at Trøndelag Teater in Trondheim in the years 1948-1950, and he staged a number of plays at Nationalteateret.

In the 1930s, Maurstad played in a number of films, and he became particularly known for his roles in "Gjest Baardsen", "Fant" and "Trysil-Knut.
Alfred Maurstad died on 5 September 1967 in Oslo. In 1977, an Alfred Maurstad memorial statue was raised at Nordfjordeid.

The hamlet of Maurstadgrenda about 1900

Maurstadgrenda got a new schoolhouse in 1894. In the 1890s, the number of pupils varied between 44 and 70. The school district belonged to the Rugsund parish. The nearest boat stop, posting station, telephone exchange and post office was at Bryggja. There was anchorage in the bay of Maurstadbukta and there was a main road, built in the years 1864-1866 up the valley of Maurstaddalen across the Maurstadeidet (Nordfjordeidet) to Vannylven.

The well-known radio reporter Arthur Klæboe made an interview with Alfred Maurstad in 1966. They were sitting on the stone quay by the Tuftene boathouse. Klæboe wanted to learn about the living conditions for the people of Maurstadgrenda, about changes in the hamlet, village characters, neighbourly quarrels, playing the Harding fiddle, rural literature and - about the actor and theatre life.

The following are a few excerpts from the conversation about Maurstadgrenda.

Are you impressed by the changes in this village?
- Well, you know - I have lived with what has been going on here in the village, like any other villager. Naturally, when you think how far it was to Bergen on a "jekt" with a square sail southwards along the sea lane, and how fast a satellite circles the earth, then I have problems understanding it all.

Look around you and see how beautiful it is in all the farmyards, people hurrying about everywhere you look, see how free and happy people are, how children shout and play wherever they want to, writing down numbers of car licence plates from all corners of the globe, as the cars hurry through the village kicking up dust.

And think of the old village, when the "smoke cottages" were still in use up until the time when I was young. The times were not only different; it was a different life, a different mentality, too. There was much superstition, people were afraid of the dark, and people whined and complained. Yes, this was true, but we must not forget that there was also a strong sense of solidarity among people, an honest willingness to co-operate and to help one another. Oh, no, the nights were not completely dark in those days either.

The first encounter with the Harding fiddle

- The Harding fiddle was not commonly used here along the fjord when I grew up. An ordinary fiddle was used, also called flat fiddle or German fiddle. There were many good fiddlers in the villages around here, so it was not a problem to learn tunes for those who loved to play.

I was fortunate enough to inherit a simple fiddle from my brother who rushed off to America. - Well, it was not much of an instrument, but it looked like a fiddle when I had fixed it up with four strings, and I even managed to cut some hair from the tail of a white mare in the village to put on the bow. Indeed, I made some music with that fiddle!

But I did not get in touch with the Harding fiddle until I was about 14-15 years old. Then I met the master fiddler Jon Rosenlid from the inner part of Nordfjord and then I was hooked. Since then, I've stuck to the Harding fiddle. And if I have irritated many people with this fiddle, I have certainly pleased a lot of people as well.

- (..) village fiddlers learn to play almost the same way as we learn to speak. You hear tunes from other fiddlers and little by little you learn, according to your interests and your talents. (..)

Gradually I learned to play many tunes, you know. It was fun to meet other fiddlers from other villages and swap tunes. Two persons from Sunnmøre were in a class of their own in terms of dancing tunes. They were Hans Gjeitvik and Per Bolstad, Sr.. They had tunes that suited our sense of melody and they hit our heartstrings. These tunes have kept well, and are still much played even today.

You have played at many weddings?
- Oh, yes. Quite a few - I would think about 40 weddings.
How old were you the first time?
- About 12.
How much were you paid for playing at such a wedding?
- Ha ha. It could vary a lot. At the first wedding (..) I was determined to demand 10 kroner. But the bridegroom actually managed to beat it down to five. At other times I could make 100 kroner, even 200 sometimes, when the dancers put money into the fiddle.

Travelling speaker in Nordfjord in the autumn of 1923

In the inter-war years, "Nordfjords Foredragslag" got hold of speakers for the youth associations. Alfred Maurstad gave lectures in the last two weeks of October 1923. It certainly was no idle life. In 14 days he gave lectures for 19 youth associations along the entire Nordfjord, all the way out to Måløy. At Sandane 260 persons turned up, and 70 persons attended the lecture in his home village of Maurstad - a total of 1690 persons heard him on this tour.

At that time Maurstad was an actor at "Det Norske Teateret" in Oslo and travelled around the country, giving lectures on Ole Bull and the Norwegian folk music. In a printed notice about his lecture tour we find the following:

"Mr Maurstad will also bring his fiddle, and he will play our best folk tunes. He will also recite poems and stories."