The Tunold stone at Selje

The artist Bernt Tunold, born at Selje on 25 February, 1877, died in Bergen on 23 January, 1946, is held to be one of the great painters from western Norway. In 1951, his memorial stone was unveiled at Selje. 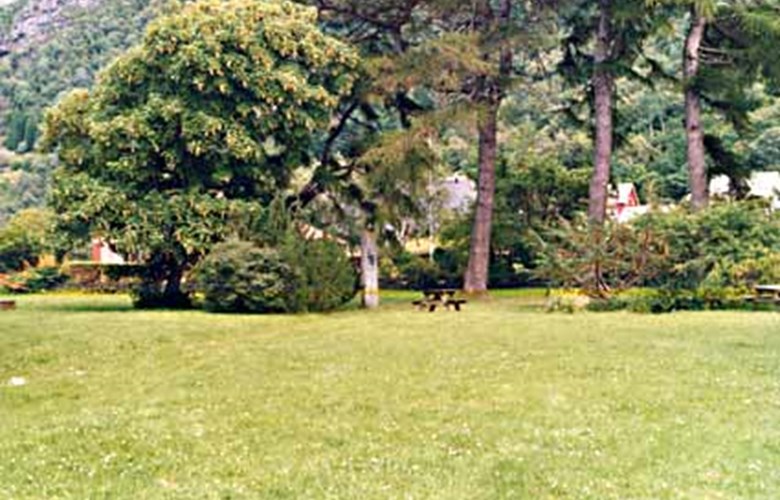 The Tunold stone is located in 'Parken', on the north side of the road leading down to the centre.

The Tunold stone is located in the centre of Selje, in the middle of Parken (the park) on the north side of the road leading down to the village. It was originally located close to one kilometre higher up, but was moved down to Parken in 1986.

The stone is about three metres high, the sides at the bottom measures 65 by 30 centimetres, and its foundation is below ground level. The name of BERNT TUNOLD and the years 1877 - 1946 are carved into the rock. The bronze relief, made by the sculptor Sofus Madsen, shows the artist the way people remember him ¿with his characteristic hat, and the alert, sharply observant look". At the bottom the words ERECTED BY * ¿NORDFJORDLAGET" * IN BERGEN

The stone was found at Hamre

The stone was provided by the youth association of Selje - ¿Selje Ungdomslag". Its chairman for many years, Ragnvald Berge, represented the association in a municipal committee where the baker Tunold and the vicar were members. It was the vicar who decided where the stone was to be placed - not a particular good choice, according to some, but the vicar stuck to his decision. The stone was found at Hamre, about one kilometre from the centre of Selje. It was cut by the road supervisor Naustdal, helped by members of the youth association. They thought that the stone should be as straight and nicely cut as possible, and therefore they added some concrete in places. The artist Sofus Madsen was not particularly pleased as he preferred a natural stone. In 2003, it is possible to see that the stone has been trimmed with concrete at the top.

The ¿Nordfjordlag" erected the stone.

Tunold died in January 1946, and the same autumn the chairman in the ¿Nordfjordlag" in Bergen put forward a suggestion to honour the artist in one way or another. The following year a committee was appointed that immediately started to work on the project. They organized various events, employed the sculptor Sofus Madsen (a friend of Tunold¿s) to make a bronze relief, and took contact with people at Selje. In May, 1951, the local paper ¿Fjordenes Tidende", Måløy, announced the day for the unveiling ceremony in June. Many people were expected from Bergen, and the ¿Nordfjordlag" hired the SS Nordfjord I for the occasion.

Sunday 10 June, 1951 was a day of celebration at Selje. When SS Nordfjord I entered the port at Selje, she was met with a salute, answered by the ship¿s siren blasts. On the quay the passengers were welcomed with song and music. Afterwards the guests and the village people walked in procession up to the memorial stone.
The editor Lauhn gave the unveiling speech. He opened the speech by giving an account of the world of the artist¿s childhood:

"Here at Selje Bernt Tunold saw the sun rise above the mountains to the east, and saw it set in the ocean to the west. Day and night, light and darkness, the ocean and the fjord, the mountains, the green fields with houses here and there - this was Bernt Tunold¿s world in his childhood years.
And the people who lived here, in their daily toil to make a living, in constant struggle against the forces of nature, a hard and strenuous life, but in no way free from pleasures. They saw the soil yield a harvest year after year, and beyond was the ocean. And on the other side of the island were the monastery ruins, silent witnesses of a distant past.

The feeling that everything is connected in life, that generations follow one another, must have been present in his mind since early childhood, and this came to mark his attitude to life."

After the unveiling ceremony, a number of speeches were given and many wreaths were laid before the chairman of the "Nordfjordlag", K. Daviknes, handed over the memorial to the municipality of Selje. The mayor Sande accepted the memorial, promising to look after it in the best possible way. The mayor Leif Iversen, Sør-Vågsøy, spoke on behalf of the Sogn og Fjordane county council. Finally, Tunold¿s son, Hermod Tunold, thanked everybody on behalf of the family.

Later the same day there was a festive gathering in the house of the local savings bank, ¿Selje Sparebank", and a guided tour to the Selje monastery, led by the sexton Ervik.
At 7pm Nordfjord I left the quay and three cheers were shouted from the ship and from land.

Bernt Tunold (1877-1946). Einar Wiig, cand. philol., from the University of Bergen, majoring in art history, has written a biography on Tunold. The book was published in 1991. In the review we find the following:
".. [Bernt Tunold] was passionately preoccupied with preserving the old rural culture in western Norway. This was expressed in paintings of old woven tapestries and wooden boxes, richly decorated wooden churches and old farm houses.
However, the most typical Tunold motif is the carefully cultivated landscape where old farm houses seem to blend perfectly with their natural surroundings. Tunold's paintings are also poetic, but it is rather the poetry of everyday life and the weather he manages to express in his pictures. Bernt Tunold went to Hyen in Nordfjord when his colleagues left for Paris to become modernists. But he was far from a dry registrar: His pictures reveal a mastery of colour and brush that wanted to break free from 'the straightjacket of naturalism.'"
Owner: I <i>Norsk Allkunnebok.</i> - Date: Ukjend. - Photographer: Ukjend.
I <i>Norsk Allkunnebok.</i>
Ukjend.
Ukjend.