On the churchyard at Midtgulen there is a memorial dedicated to Erling Julin Olsen. The stone was erected in 1947 by the people of Svelgen c/o "Svelgen turn- og idrettsforening" (sports club). Olsen was a war pilot and was shot down during a training mission in England.

The memorial stone for Erling Julin Olsen at the Midtgulen churchyard, Kjelkenes. It is some two metres high and was delivered by "Brødrene Sildnes", Eide in Nordmøre.

OLSEN, ERLING JULIN, pilot, Bremanger. Born 26 December 1917 in Florø, son of engineer Oskar Julin Olsen, born 1888 in Bergen, and Klara Amanda née Johansen, born 1902 in Florø. Secondary school, flying school at Kjeller. In early 1941, fled in a fishing vessel to Shetland and joined the air force. Was wounded on 13 August 1941 during a fight over London, managed to land the plane, but died a few hours later at the hospital because of his wounds. 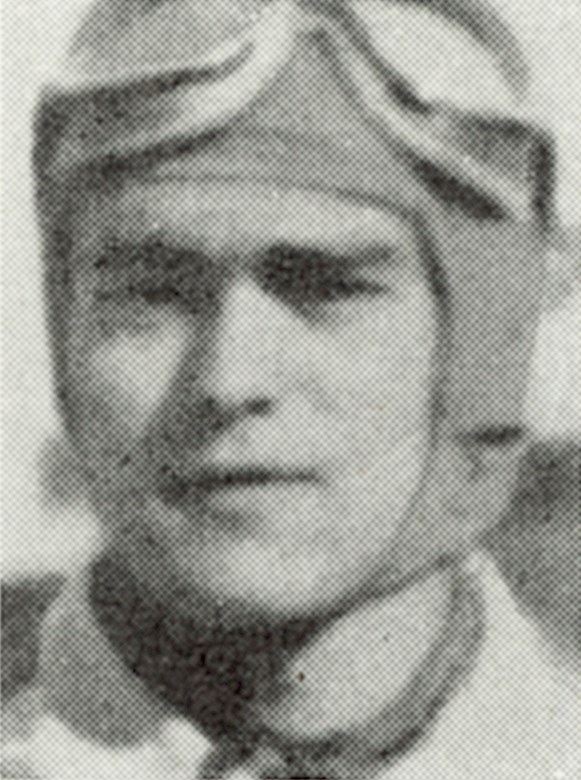 A driving force in sports

Erling Julin Olsen was a versatile athlete and a leader of the local sports club "Svelgen turn- og idrettsforening". He was chairman and instructor in the gymnastics group, was a member of the main board, as well as editor of the club magazine "STIF-posten".

The sports club took the initiative to erect a memorial on his grave, and appointed a memorial committee under the leadership of Alf Midtbø. The more than two-metre-high stone was delivered by the company "Brødrene Sildnes" at Eide in Nordmøre.
The stone has the following carved inscription:

The memorial stone was unveiled on Sunday 22 June 1947. Flight captain Råd, who had served with Olsen in England, came down from Tromsø to lead the ceremony. The chairman of the sports club, Alf Zachariassen, gave the meorial speech. Excerpts from his speech:

"On an August day in 1941, over London, you gave your young life for your country. Unwavering, you decided to serve your country in its darkest hour when the efforts of each individual count most. We had so much been looking forward to getting you back home with fresh impulses, but it was not to be.

As a member of STIF (sports club) you were the driving force, both as an active athlete and as an administrator. You were an excellent organizer, whether it had to do with fund-raising activities, events, or publication of the club magazine; you took care of it all. You excelled in many sports - gymnastics, athletics, and skiing. We learned to appreciate your fine qualities. We remember well your open and refreshing character, your direct demeanour. You are still the role model for the young people of Svelgen. We honour your memory!"

Erling Julin Olsen (1917-1941). Olsen fled to Shetland in the spring of 1941 and joined the Norwegian Air Force. He was in his last stages of training when the accident happened. On a training mission at night, without any ammunition, he was unexpectedly attacked by a German plane. He managed to land, but he died at the hospital a few hours later. His urn was brought home and placed on the churchyard at Midtgulen on 11 December 1945.
Owner: I <i>Våre falne.</i> - Date: 1939-1941. - Photographer: Ukjend.
I <i>Våre falne.</i>
1939-1941.
Ukjend.

From the unveiling ceremony on Sunday 22 June 1947. Flight captain Råd, who had served with Olsen in England, came down from Tromsø to lead the ceremony. The picture shows that the monument was originally surrounded by a square of small stones linked by chains. All this was later removed because of increasing disintegration.
Owner: Frank Ryland. - Date: 1947. - Photographer: Ukjend.
Frank Ryland.
1947.
Ukjend.
resources:
Firda Tidend. 20.06.1947. Sandane.
Firda Folkeblad. 18.06.1947. Florø.
Våre falne. Oslo 1948.Ryland, Frank: Heia STIF! Svelgen Turn- og Idrettsforening 1930-2000. 2003.