Stongfjorden "bedehus" chapel is a rebuilt "bedehus" built in wood. It is situated in the village of Stongfjorden in the municipality of Askvoll. The "bedehus" chapel, which has a seating capacity of 300, was built in 1908 and consecrated for church functions on 6 December, 1914 by the dean Jonas Rein Landmark. Martinus Haugen designed the original "bedehus" and the architects Torgeir Alvsaker and Einar Vaardal-Lunde made the design for the chapel rebuilding. Stongfjorden belongs to the Askvoll "sokn" in the Askvoll parish. 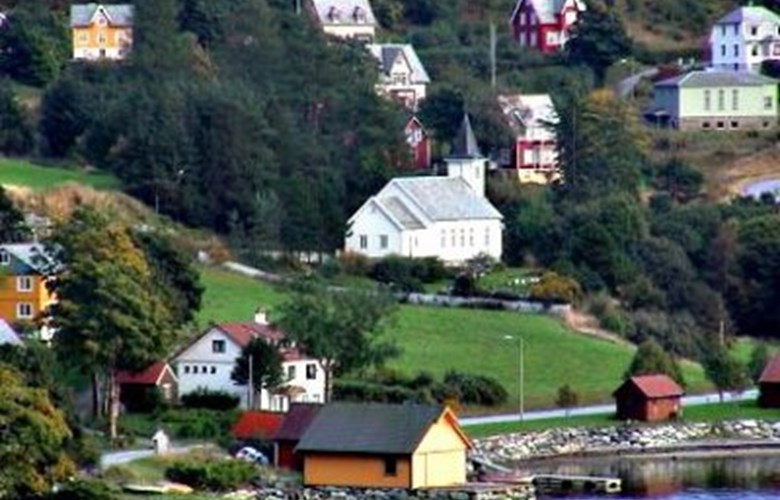 The 'bedehus' chapel was built as a 'bedehus' but was all the time intended to be rebuilt as a chapel. It took close to 60 years before this intention was fulfilled.

Place of worship in an industrial village

Stongfjorden got its own "bedehus" the year after the very first aluminium production in the Nordic countries started up in the village. From the time the building committee secured the site for the "bedehus", it was a matter of only five months until the house was completed. The population boom in connection with the new industrial plant was a major factor in this process.

The land for the site of what was a "bedehus" at first, was given by Peder Johan and Marie Stang til "Stangfjordens indremission" (an evangelist society). The foundation work was carried out mainly as voluntary work, and when the "bedehus" was consecrated in 1908, Askvoll had once more got another place of worship built by and for the people at a very low cost. In the contract with the master builder, the building expenses amounted to 6634 kroner. From the very start, the idea and the aim was to build a chapel on the site which could be used for church functions, in order to avoid the long travels to the Askvoll church. In other words, the ¿bedehus" was meant to be just the first building stage. 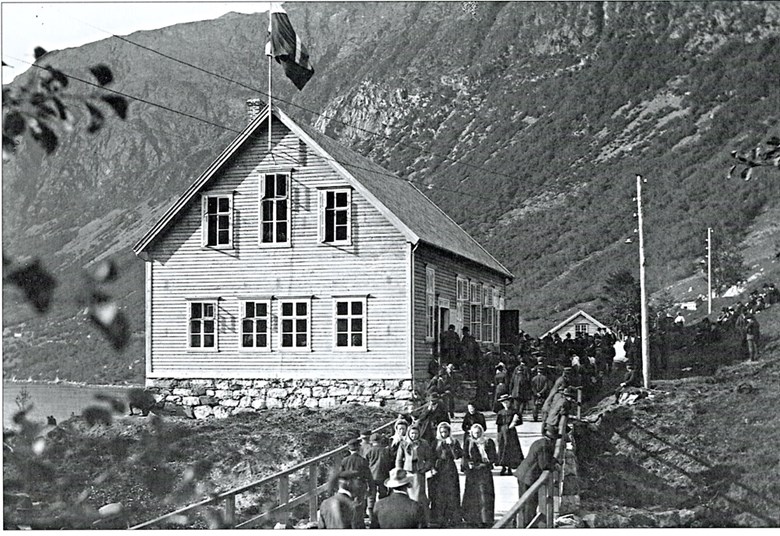 The wish for a chancel addition

From 1911, Stongfjorden was allowed two church services a year, and in connection with the consecration of the house for church functions in 1914, the village could now have up to six services a year. However, the chapel still had no steeple with church bell, chancel, or vestry. In other words, the building was not properly furnished as a church. As early as 1911, the Stongfjorden evangelist society sent an application - with the recommendation from the local council of Askvoll - for a state allocation to build a chancel addition so the house could be consecrated for church functions. The application was turned down.

In 1936, the same evangelist society sent another application directly to the Ministry of Church Affairs for a sum of 8000 kroner from public funds. The "sokn" council enclosed a strong recommendation, arguing that the attendance at the church services at Stongfjorden had always been good. Consequently, there was a great need for the extension now applied for. This application was also turned down, and the congregation had to be wait in patience before their wishes could be fulfilled.

From optimism to closure

When it took more than 60 years from the "bedehus" was built until the original plan of a church building came true, this can partly be explained by the industrial development of the village. In the first few years there was an air of optimism in the village, and the many workers who came to this place were probably also interested in having a place of worship. In the local community the factory management had to give priority to other more pressing needs, such as the building of houses for the workers and a school for their children.

The "AS Stangfjorden Elektrokemiske Fabriker" (Electro-chemical factories) supported the "bedehus" at first by providing various equipment and electricity. In 1918, the factory stopped its operations due to problems with the water supply. Some years later the operations were resumed and were continued in the unstable 1930s up to World War II. Then the Germans ran the factory, but eventually had to close down because of lack of raw materials. The Germans also made use of the ¿bedehus" from 1941 to 1943. This meant much repair work and washing afterwords.

Additions after the war

When the industrial adventure in Stongfjorden had come to an end, the evangelist society once more started to apply for allocations and extensions. By means of raised money and municipal contributions, the original plans could by and by be realised. The original "bedehus" building today constitutes the nave of the "bedehus" chapel.

In 1949, a temporary belfry was built for the church bell so the graveyard could be taken into use (1950). In 1963, the basement was completed with dining room, kitchen, and toilet facilities. The chancel was added in 1970, and then the house could at long last be called a "bedehus" chapel. In the extension, room was made both for a vicar's vestry and a baptismal vestry. The following year a steeple was built above the porch.

The altarpiece from 1933 is painted by Per Vigeland, depicting Jesus' resurrection. Below is the inscription: "I am the resurrection and life!" The framework is made by Elias Sølvberg from Innvik, and the altarpiece is a gift from Sofie Fauskevik. Per Vigeland (b. 1904) was a nephew of Gustav Vigeland, and he is best known for his church decorations in mosaic and stained-glass paintings. Among his most famous art works is the "Capella Johannea" (John's chapel) in the Prestenes church at Majorstua, Oslo.

The pulpit dates from 1970, and is made by "O. Ask snikkarverkstad". The font also dates from 1970. The baptismal bowl and the holy water ewer are undated.

The organ from 1927 has four registers, and it was financed by means raised by the local choir of Stongfjorden. The church bell from 1948 is made by "Olsen Nauen Klokkestøperi". It carries the inscription: "The Lord calls".