The village of Gudvangen

Gudvangen is located at the very head of the Nærøyfjord, covering a distance from Stalheim in the western part of the valley of Nærøydalen to Dyrdal further out the fjord. The village includes the farms of Ramsøy, Gudvangen, Skjerpi, Hemri, Hylland and Solbjørgo. From the 1800s, the village has been known for its built-up area by the quay, its accommodation establishments, posting station as well as trade. 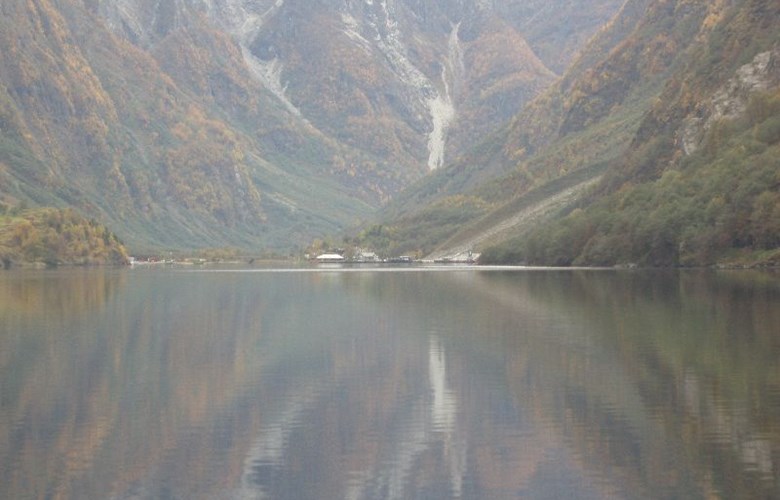 The centre of Gudvangen seen from the fjord today.

The oldest farm in the village

Based on the local topography and archaeological finds, we can draw a conclusion as to what must be the oldest farm in the village. A large part of the area consists of a valley floor on either side of the big river of Nærøydalselvi. If we consider the number of annual sun hours and the risk of flooding, this area would not be the ideal spot for settlement in former times. In the case of the Ramsøy farm, however, this is located on a terrace in the landscape with the best view towards the head of the fjord. It is no coincidence, therefore, that the oldest find comes from this place, a so-called western type of axe made of black basalt, dating from the younger Stone Age.

When the governor Hannibal Sehested in 1947 established the postal route between Bergen and Oslo, new roads were built both in Lærdal and across the mountain passage of Filefjell, as well as between Gudvangen and Voss. This meant that Gudvangen became an important place in the communication between eastern and western Norway. In 1734 the king conferred the privilege to run an inn and a trading post there, and in a short time Gudvangen replaced the role Arnehus in Dyrdal formerly enjoyed. When the railway line between Bergen and Voss was opened for traffic in 1883, the traffic by way of Gudvangen increased significantly. As a result, tourism developed rapidly at Gudvangen. Ships brought tourists across the North Sea to Bergen and from there further into the fjords on local steamers, but cruise liners also plied the Norwegian fjords. At Gudvangen more than 200 horses and carts could be lined up to transport passengers on their way to Stalheim, Voss and Hardanger. Many farmers made good money on this.

The traditional building style at Gudvangen

In the 19th century the large number of tourists meant that many hotels and other buildings were erected in the centre of Gudvangen. This intensive building period has led to a rather uniform 19th century building style at the place, dominated by the so-called Swiss style. A clear indication of the transformation that took place in terms of tourism in the 1800s is the fact that the centre is today looked upon as a cultural environment in the county. An excellent case in point is the Swiss-style Vikingvang Hotel, consisting of a main building from 1870-1880, with an addition from the 1890s. Two of the old inn buildings from Arnehus at Dyrdal were bought at an auction in 1739 and later rebuilt at Gudvangen. For a while these two buildings were used as an annexe to the hotel.

Gudvangen is today a thriving village with about 90 inhabitants. In addition to the traditional farming activities, the inhabitants make a living in trade and industry, but still above all from tourism. In addition to hotels, souvenir shops and camping sites, a Viking Village has been established, highlighted by the annual event of a Viking Market. In connection with the Viking project, a free reconstruction of a Viking ship - found at Fjørtoft in Sunnmøre - has been built. The ship is used by the Viking club for trips on the fjord, and can also be used as an activity for tourists. Apart from tourism there is a huge economic potential in the deposits of anorthosite in the area between Gudvangen and Mjølfjell. The anorthosite contains aluminium oxide (alumina) and can be used as an alternative aluminium raw material to bauxite. Anorthosite is also used to make dynamite, fertilizer, as well as in the painting and paper industries. The deposit has been known since the early 20th century, and for a long time plans have been made for a large-scale mining operation. In 2005 close to 200 000 tonnes of rock were extracted and exported, mostly to be used in the production of insulation material (mineral wool).

In other words, the mining of anorthosite can contribute to creating more local workplaces. At the same time, there is a big challenge in the interplay between the mining operation and the objectives implied in the UNESCO World Heritage status of this area.

On the Ramsøy farm a western type axe made of black basalt has been found. It can be dated to the younger Stone Age, which indicates that the farm is among the oldest in this area.
Owner: Aurland kommune, lokalhistorisk fotoarkiv - Date: 1940 - Photographer: Bergen Museum
Aurland kommune, lokalhistorisk fotoarkiv
1940
Bergen Museum