The island of Gåsvær is located far to the west in the sea between the Lågøyfjord and Gåsværosen in Solund. From the Lågøyfjord the one-kilometer-long island looks like a low strip of land. Gåsvær is believed to be the westernmost farm in the country. Although it is weather-exposed, the harbour is good. Some of the old buildings down by the sea are still intact. 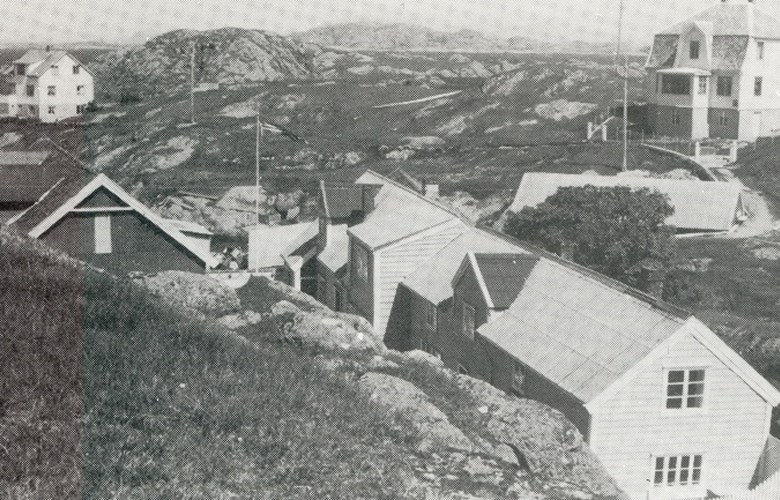 Gåsvær seen toward the northeast. The residential house is well protected against wind and weather.

In the 1760s, Gåsvær was bought by Vilhelm Lexau, the son of Møller's sister. He also bought the trading post of Husøy. In 1767, Lexau was permitted to operate an inn, in addition to general trade. He was instructed to make his own beer, but had to buy the brandy from Bergen.
Lexau himself lived in Bergen, so the trading post was run by assistants, so-called "Geselle" (German for apprentice).

In 1801, Johannes Larssen Gloppe was a "Gesell" at Gåsvær. He supervised the trading business and the inn. In addition, he was a farmer and permanent resident. At this time about 15 persons lived on the island, and of these two male servants and two maids worked under Gloppe.
The company 'Lyder W. Nicolaysen og Søn' bought Gåsvær from Lexau around 1800. The company had bought Utvær, Stokkevåg, and Husøy in the same district. In 1812, Nicolay Nicolaysen took over the operation from his father. He was married to Bolette Lexau, Vilhelm Lexau's daughter. In 1839, Bolette, who by then was a widow, sold the trading post to Lars Møldrup Gjertsen Lervåg.
To all appearances, the trading post at Gåsvær was shut down not long before 1850. At the county council meeting in 1842, there was information that the inn had shut down business. One reason may be that the trading post at Buskøy was expanding rapidly at this time.

After the trading post and the inn were shut down, the people at Gåsvær have made a living by a combination of agriculture and fisheries. Gåsvær was a farm of its own with two to three cotters' farms. The census of 1865 shows three families there, totalling 21 persons. Berent Hansson and his wife Britha Johannesdotter had two foster children, two male servants, two maids, and the old people with rights to live there, Lars Gjertsen and Oline Berentsdotter, who had a male servant in their household. Berent was called a farmer, an independent landowner, and a fisherman. The household of Knut Olsen and his wife Hylleborg Hertzberg Olsdotter counted three daughters, one son, and his wife's illegitimate son. Knut was called a cotter and a fisherman. The third household counted three persons only: Johannes Olsen, his wife Marie Jørgensdotter, and the lodger Jørgen Mathiasson. Johannes was called a cotter and a fisherman, while Jørgen was a fisherman.

The oblong residential building was built in several stages; three houses are believed to have been built into one. The older part probably goes back to the 1700s. The building had four living rooms, one after the other, a kitchen, and corridors. The house has been empty, and it has been used exclusively as storage space for fishing tools. It is located so close to the sea that at spring tide water has flooded the lowest part of the building. The big sea warehouse was built in 1904. Before this there were two sheds with the gables toward the sea on this site.
Legend has it that the living room to the south was built by materials from a sailing vessel which was wrecked there. The bent roof beams are believed to have come from the poop of the sailing vessel. The living room is built in solid timber and is tarred on the outside. It must date back to before 1830, yet it still stands. 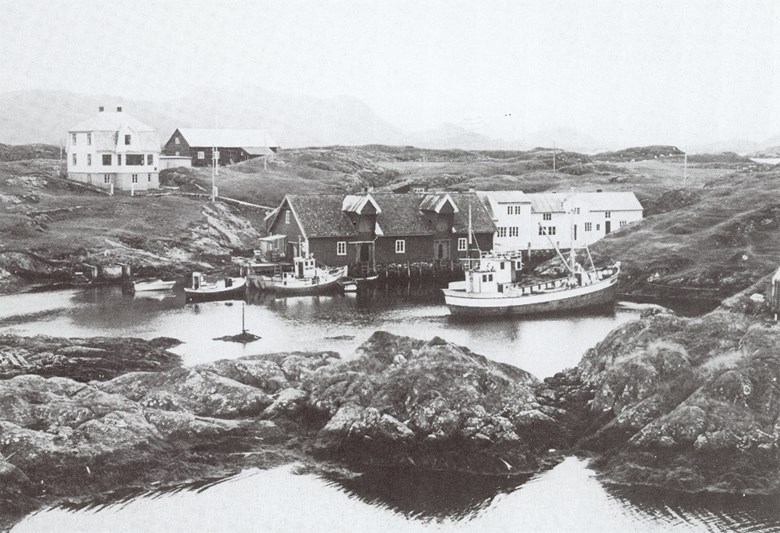 Gåsvær has not been included in the tables of stops of the Fylkesbaatane (steamship company), and was not called at regularly by scheduled boats until the 1990s. Yet, 17 persons still live there - as of March 2001. While the old trading post of Husøy has no permanent residents, Gåsvær has managed to keep up its population. From 1900 to 1970 the salmon fishery was the most important source of revenue. Later, coast seine boats have been bought, which are believed to have growth prospects. In the 1970s, tourists were catered for, they rented boats and went fishing. In cooperation with Fylkesbaatane, some operate express passenger boats. Some commute to other parts of the municipality. Hardbakke is the municipal centre, and many have found work there.