The Kannestein rock is a unique rock formation in the bay of Kvalheimsvika on the island of Vågsøy. The eclogite rock is located on the farm of Nord-Oppedal and is definitely one of the major tourist attractions in this area. 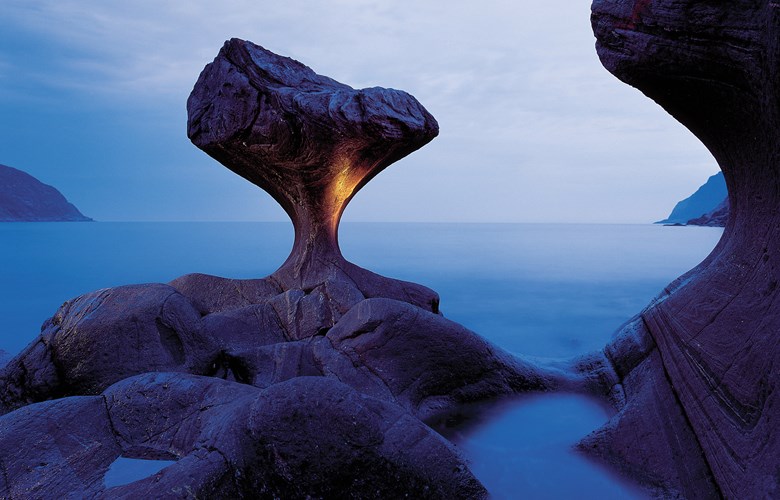 The Kannestein rock is located in the bay of Kvalheimsvika, not far from the farm of Nord-Oppedal.

For thousands of years waves have been hammering away at the Norwegian coastline and shaped many strange formations. One of the best known of these is the Kannestein rock on the island of Vågsøy. Some would say it resembles a goblet on a thin stem. Others see it as a mushroom. Local people have called it "Kannestolen" (the Kanne chair), and dislike the fact that it has been given a new name. In their opinion, the old term made more sense as the rock resembles a chair on one leg.

The bay of Kvalheimsvika is situated furthest to the west on the island of Vågsøy, facing the open ocean. The bay is exposed to the prevailing strong westerly winds and heavy breakers. Some rocks are weathered and shaped by these waves. Eclogite is a common rock in this part of Nordfjord, and the Kannestein rock consists mostly of this rock. It has a height of three metres on the sea-side. The widest circumference measures 10.4 metres, whereas the narrowest part of the "stem" measures 6.3 metres.

The bedrock in Selje and Vågsøy is mainly composed of banded or striped grey gneiss, the most common rock in western Norway. However, in the gneiss you can find eclogite in the form of lumps in the bedrock. It is composed of red and green minerals (garnet and omphacite) in stripes or bands or evenly distributed in the bedrock. Eclogite is a beautiful rock frequently used for ornamental purposes, but is hard to extract, and is not very resistant to wind and weather. Eclogite is twice as heavy as gneiss and was formerly much used as ballast in boats. On the surface, eclogite has a reddish-brown colour, which explains why areas rich in eclogite have many place names with the words "rød/raud" (red) as prefixes.

By car it is just a 15-minute drive from Måløy to the Kannestein rock and this attraction is a must for tourists in this area. The Kannestein rock is used as a spectacular eye-catcher in many tourist brochures from Vågsøy and Nordfjord. By and by it has become the most photographed object in the whole municipality of Vågsøy. The rock is located down by the seaside, and at high tide the sea surrounds the rock. At low tide, however, it is possible to get to the rock without getting your feet wet. Many visitors climb up on the rock to be photographed perched on the top. Another way of getting up on the rock is to jump from the slippery rock beside it, but this act is not for the faint-hearted.

The Kannestein rock has been registered as a protected location according to Norwegian law. The rock must remain standing in its own environment, it has been stated. It must be said, however, that its footing, as it were, is not very steady. It would take only an easy push from an excavator to flip the rock off its "stem". Some people say that the rock is stable enough, and that it will not be destroyed by natural causes. On the other hand, what the future holds for the rock is anybody's guess. Should something be done to secure the rock for future generations or should we leave nature to run its course? Is there a risk of the rock falling into the sea in a foreseeable future and disappear forever?

At low tide it is possible to climb the rock. Some even choose to jump across from an adjacent rock.
Owner: Fylkesarkivet. - Date: 2000. - Photographer: Ukjend.
Fylkesarkivet.
2000.
Ukjend.

The form of the rock changes depending upon the angle. The 'stem' looks thicker from this angle. Some years ago somebody wanted to buy the rock and take it abroad, but fortunately nothing came out of the idea.
Owner: Wim Kamp. - Date: 2000. - Photographer: Wim Kamp.
Wim Kamp.
2000.
Wim Kamp.