The hamlet of Bakka

The small hamlet of Bakka consists of the farms Bakka and Tufto. In the Nærøyfjord these two farms on the right-hand side are the last two farms that the boat passes on her way to the head of the fjord at Gudvangen. The hamlet is probably best known for its white church, designed by the architect Christian Henrik Grosch, who was also responsible for large parts of the urban development in the capital Christiania (Oslo). The hamlet is also known for tis World Heritage Tour with its starting point between Bakka and Tufto. 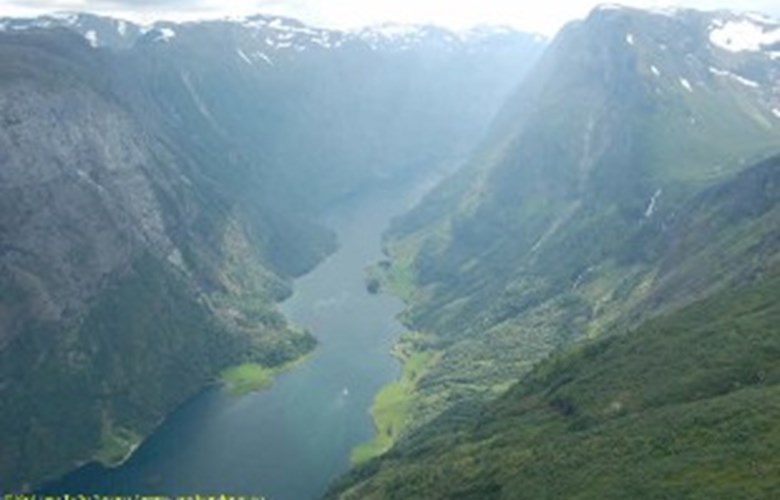 Bakka and Tufto seen from the mountain of Breiskrednosi during the World Heritage Tour in 2007.

A short distance southeast of holding # 2, furthest to the south in the hamlet, there is a small hill called "Borgahaugen". According to legend, there was a rural fort on this hill. This is an exciting legend, but if we take a closer look at "Borga", we see that this differs from the traditional location of a rural fort. In order to function as a good refuge, such a fort should be located at the top of a hill, preferably with steep hillsides. Such a position would make it easy to build stonewalls to prevent the enemy from entering the fort. In the archives we frequently find references to "borg" names in connection with burial mounds or rock piles. This may explain the name in this case, as there allegedly was a rock pile on the premises.

Woman's grave with a loom

In another mound 200 metres to the north of the cottage on the farm a number of loom weights were found. These were probably made of soapstone or slate and were used as weights at the bottom end of the warp (vertical threads) to keep them taut in the so-called warp-weighted loom. This type of loom - raised at an angle against a wall - was most used in the younger Stone Age and the Viking Age, and it was predominantly woman's work. This weaving technique implies that the weaver is standing during her work, no shuttle is used and the weft (horizontal threads) is passed by hand through the gap between the two layers of the warp. In addition, the weft is inserted with a weaver's reed.

A fine farm by the fjord

It is very likely that Bakka and Tufto originally were part of the same farm as they are referred to as inner and outer Bakka in written records up until the 17th century. Outer Bakka (Tufto) was separated as a farm in its own right about 1750. Even as early as about 1700, the number of people at the farm was high compared with the other farms along the Nærøyfjord. This may indicate that the farm was relatively big. The people on the Tufto farm were considered to have been prosperous in the 1700s, showing that the farm gave a good income. According to legend, the prosperity of the Tufto farmer came from treasures found in the huge burial mound at Holmo, on the opposite side of the fjord. The truth is rather that the people at Tufto were hard workers and good tradesmen.

Use of the outlying fields

Much of the income of the farms in the hamlet of Bakka is caused by the use of the outfield resources. In particular, the use of the mountain farms played a decisive role for the number of animals it was possible to feed on the farms. There are altogether six mountain farms under the two farms: Flåtane, Seltuft, Stølsnes, Rimstigen, Breidalen and Røyrdotten. The path up to the mountain farms was originally a good track for packhorses, in some places with fine stonewalls. The path bears the same name as one of the mountain farms - Rimstigen. Johan Fritzner's dictionary "Det gamle norske Sprog" (the Old Norwegian Language) explains the first part of the composite word - "rim" as an old Norse word meaning picket or strap. The meaning of the word can then point to something narrow and long. The second part - "stige" - may mean both ladder and path.

Place names frequently refer to former activities at the farms and in the outlying areas. At Bakka we find the place name "Kolmilebakken", showing that the production of charcoal probably took place in the outlying areas in former times. Along the path up to the mountain farms there are a number of elm trees that have been pollarded (that is, their branches and twigs have been cut off and dried for fodder). Most likely this was a resource used by the many crofters, in addition to haymaking in the outlying fields as well as fishing in the fjord. The crofts were located down by the fjord, and the sites and foundation walls are still visible in addition to some of their boathouses.

In records from the 1300s we can read that the Undredal church was a landowner and demanded property tax from the Bakka farm. In the late 18th century the farmers were given the opportunity by the king to buy the church and the land, thus becoming independent landowners. For centuries the parishioners had belonged to the Undredal church, but now a discussion arose as to the location and size of the church. For the people who lived in the valley of Nærøydalen and along the Nærøyfjord, getting to church was both a long and dangerous journey, especially in the winter months. One solution to this problem was put forward to the effect of moving the Undredal church to Nærøy. In 1855 it was decided to establish a separate "sokn" (sub-parish) at Nærøy. This was a consequence of a law passed a few years earlier that all churches should be big enough and have seating capacity for one third of the population in the "sokn". The outcome was that the municipal authorities decided to take over the Undredal church if the farmers at Bakka financed the building of a new church at Bakka. In this way the Undredal church was neither torn down nor removed, and a new church at Bakka was designed by the renowned architect Christian Henrik Grosch. The Bakka church was consecrated in 1859.

Many of the buildings at Bakka still look as they did when they were built in the 1800s and even earlier. This leads to a general building environment of great architectural and cultural value. Moreover, some of these buildings have an intrinsic value. A case in point is a big boathouse in the bay of Blombakkviki, with massive stonewalls and gables of wood. The boathouse is probably the oldest of its kind in the hamlet, and the building construction is of a type stretching far back in time. The residence of holding # 5 is an early example of house of the so-called central hall type. The house has a classicistic entrance section and a dormer in the middle of the front, which indicates a building period in the early 19th century. However, one part of the house may even be somewhat older.

A visit to Bakka, then, means a chance to see this well-preserved building environment and a cultural landscape to match. By hiking up the path of Rimstigen, people have time to reflect on what life at the mountain farms implied in the old days, at the same time as enjoying a fantastic natural experience. The hike is considered to be rather strenuous in terms of climbing and length, but it has become very popular among tourists and locals alike.

Pollarding of elms has been one of the many activities in the outlying areas of the farms in the hamlet. The man's name is Ole Hansen Gudvangen (1868-1954), the woman to the left may be Kristina Bakka, whereas the woman to the right is unknown.
Owner: Aurland kommune, Lokalhistorisk fotoarkiv - Photographer: Ole David Skjerping
Aurland kommune, Lokalhistorisk fotoarkiv
Ole David Skjerping