In front of the oldest building at the Sunnfjord folkehøgskule there is a memorial stone. The stone was erected in 1933, in memory of Rasmus Øvrelid, principal of the school 1903-1916.

The Øvrelid stone is cut in granite, more than four metres high and 75 centimetres at the base. It is secured in two square, concrete foundations, and there are ropes between the low points in each corner. The inscription is cut into the stone. On the front: RASMUS * ØVRELID * 1876-1931 * SO SIGNE * DAA GUD DET * GODE SAAD (May God bless the good seed). On the back: VENER REISTE * DENNE STEINEN 1933 (Friends had this stone erected, 1933)

On the upper part of the stone a bright sun is cut. 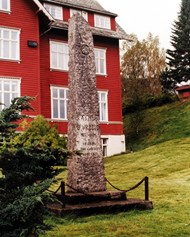 Rasmus Øvrelid was mentioned in Norsk Allkunnebok, which was published in the period 1948-1964: 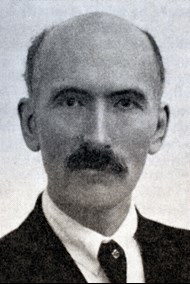 In the year when Øvrelid died, the board of Sunnfjord Ungdomsskule issued an appeal to raise a memorial for him at the folk high-school. The stone was erected the following year and unveiled at the students' union on Sunday, 29 October, 1933. A great many people from the district of Sunnfjord had come for the occasion.

The chairman of the county school board, A.B. Vamraak, parish clerk, gave the ceremonial speech. The 50th anniversary yearbook of the school has an article about Rasmus Øvrelid, written by Kristian Ulltang. He underlines some of the points Vamraak included in his speech, f. ex. this:

- The person in whose memory a stone is erected, must have contributed more for people than others have done. The speaker also mentioned the history of the school in the Sunnfjord district: Anders Haave and Thorbjørn Horten, - the man who nourished thoughts and through "Ungdomsvennen" (the youth friend) put the thoughts into practice. The school became reality (1902), and Øvrelid was the man to put this idea into practice. There was a question about the conflict or harmony between Christianity and culture, between the humane and the religious.

At the unveiling ceremony there were a number of speeches - the chairman of the school board, Nils Husetuft, Bertel Kaale, principal, Lauvsnes, principal, and Kristvik, principal. Kristian Ulltang was a spokesman for Øvrelid's many students over 13 years.

Promise to take good care of the memorial stone

Otto Huseklepp, principal, received the stone on behalf of the school. He said among other things:

"- Rasmus Øvrelid dug deeply in the ground. He did not move often, because he settled down where he came. In two places he gave his strength and his efforts: at Volda lærarskule and at Sunnfjord ungdomsskule. In both places he won many and faithful friends.

In Volda he was active and did good work, but here in Sunnfjord he laid foundations. The folk high-school as well as much of the best idealistic work in Sunnfjord are built on the foundation laid by Øvrelid.

Therefore the memorial stone is going to remain here, and therefore the school gives thanks that a dear memory is connected to this place by a beautiful and stately memorial. And we promise that we shall honour the stone and the memory that will last for a long time after Rasmus Øvrelid."