The old schoolhouse at Hardbakke

Hardbakke was the second place in Solund which had a schoolhouse. From 1870 onwards, the schoolchildren could climb up the stone steps to a spacious classroom. The teacher and his family lived in the other part of the building. For almost 90 years, this house welcomed schoolchildren. 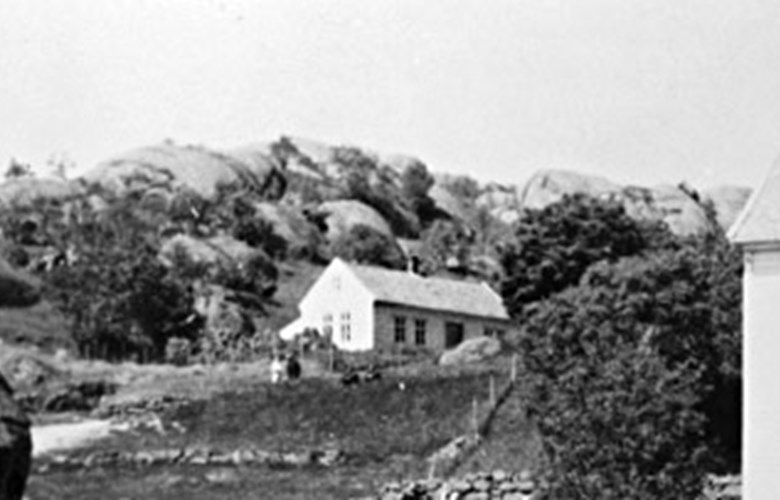 On a small site of flat land above the church, the old schoolhouse at Hardbakke was situated. It pointed north/south, some 30-40 metres from the new public road.
There were four windows. Through the two to the south, the sunshine could be unpleasant. Strong wind from the south would push rain through the window frames, so those who were working with ink and paper wisely moved away from the windows. Against other winds, the house was protected, the slated roof was tight, and some robust plants grew along the wall.

The ambulatory school came to an end as schoolrooms were being rented if they were suitable. After the teacher Torkjel Jensen had built a permanent schoolhouse at Indrevær in 1844, Hardbakke was the location of the next schoolhouse, but only about 25 years later.
When the church at Hardbakke was taken into use in 1860, the vicar and the parish clerk both lived at Eivindvik. Four years later, Hans Takle was appointed teacher and parish clerk at Hardbakke. He had been an ambulatory schoolteacher in the western district from 1859. The municipality then asked permission from the diocese to have a parish clerk residence built, with an unpaved road, and with right of access up to the new public road.

Because they were able to connect this issue with a schoolhouse, they succeeded. But an unpaved road, which would increase the parish clerk's pay, was not built, although the property in some documents was called a parish clerk residence and even had grazing rights in the outlying fields.
In 1870, the house was completed, and Hans Takle could move in with his wife and their first child. The house had a classroom and living quarters for the teacher. In the south part was the quite spacious classroom, the whole width of the building. In the north part, there were a small living-room, a kitchen, and a pantry. The small entrance in the middle of the house was for both schoolchildren and the teacher's family. On the first floor were divided attic rooms.

Did they sleep on the floor?

The house became quite crowded, especially during the confirmation preparation, which lasted for three days. Then many of the visiting children were lodged there. In 1894, they were even given a year of secondary school. The new teacher, Nils Emil Aarøy, was hired at NOK 0.50 per hour, of this the pupils had to pay one fourth. Those with the longest return home were lodged in the attic of the schoolhouse. Boys only took the course. They came from the whole municipality and later made names for themselves in the community, in education and in politics. Several became teachers. If it was crowded and cold in the schoolhouse attic, at least there was plenty of fresh air!

Most of the children who belonged to the Solund school came long distances on foot across rugged and wet fields. Or they struggled in windy sounds in a rowboat. Few lived at Hardbakke. On many autumn and winter days, black and grey woollen socks and stockings hung in front of the wood-burning stove to dry.
On the back side of the schoolhouse there was a hallway for birch wood bought in the Sogn district, and the schoolchildren cut and chopped during the breaks. A short path led to the humble pit privy, divided in two, one room for the schoolchildren and one for the teacher and his family, enveloped in palm leaves, somewhat apart.

Beside the potato field in front of the schoolhouse, there was a square grass playing field. There were sharp reactions when the ball landed in the potato field, and even sharper when a window pane was broken.
In the late 1930s, the classroom was beautifully painted by Albert Simmerøy. Particularly pretty was the decor between the floor and the walls. When the teacher climbed up on a chair in the morning and lit the 14-line paraffin lamp with a white globe in the middle of the room, there was a homy atmosphere and an air of solemnity in the classroom. Although the schoolchildren have different experiences, most of them took with them good memories and useful learning from this schoolhouse which for 87 years welcomed pupils.

Hardbakke in 1950. The white building with a door on the long wall is the schoolhouse. The public road from Hop runs all the way down to the steamer quay. The new school was later built to the left of the church. The strait diagonally upwards to the left, was the school road for Leirvågen, Steinsund, Steinsundholmen, and Holmevika. The other schoolchildren walked on local roads and across fields.
Owner: Fylkesarkivet, SFFf-88169.0018. - Date: Ca. 1950. - Photographer: Ukjend.
Fylkesarkivet, SFFf-88169.0018.
Ca. 1950.
Ukjend.

The pupils in the upper forms in 1940. To the right, the windows of the teacher's living-room. The classroom is to the left of the stone steps. Inside, there were wooden double desks with a slanting tabletop, and a cupboard with two doors which could be locked. In the cupboard, there was a small collection of books, pen nibs, books for drawing and writing.
Teacher during the war years was Njål Fosse from Leikanger.
Owner: Fylkesarkivet, SFFf-88166.0001. - Date: 1940. - Photographer: Njål Fosse.
Fylkesarkivet, SFFf-88166.0001.
1940.
Njål Fosse.

The house has done its job and is replaced by a new residence for the doctor and a health centre. The schoolhouse, which was taken into use in 1870, is believed to have been moved there and was thus older still. A new school building on a different site received the pupils from 1957 onwards. The old schoolhouse was partly residential and had office space for the last 5-6 years before it was torn down.
Owner: SFFf-88165.0007. - Date: 1963. - Photographer: Ukjend.
SFFf-88165.0007.
1963.
Ukjend.
resources:
Steinsøy, Alf: Gards- og ættesoge for Solund, band 1, Solund 1982.
Solund kommune:
Steinsøy, Alf: Uprenta manus til skulesoge for Solund.