In the park by Florø church stands a towering memorial in commemoration of those who lost their lives in the war 1940-1945. "Our dead deserve a dignified memorial", it was written in an appeal to raise money in the summer of 1945, "future generations must remember what they did and be urged into action." The memorial was unveiled on a Sunday in August 1946, with about 1500 people attending the ceremony. 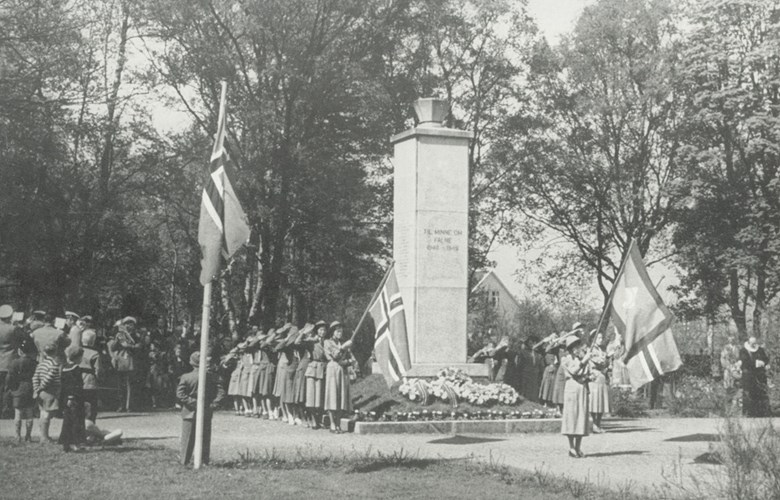 Memorial ceremony on 17 May by the monument commemorating those who died from the municipality of Flora. The memorial stone was unveiled in August 1946, attended by about 1500 people. Later on, there have been memorial ceremonies every year on 1 May and 17 May, as well as on anniversaries for the attack on Norway and the day the war ended. The picture - taken some time before 1960 - shows many people attending the ceremony, flags, brass bands, parades and honorary guards, flower decorations and wreaths.

Many dead from Flora 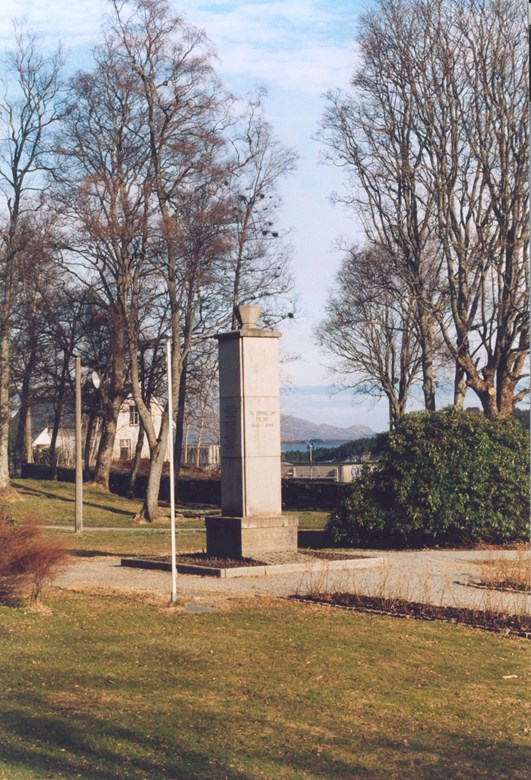 Olav Aas was one of them

Olav Aas was one of the 33. In the book "Våre falne", published by the Norwegian authorities in 1948, there is a short reference to each one of them. The following is an example of these references, this time to Olav Aas:
-- ordinary seaman, Florø. Born 22 May 1923 in Florø, son of Fridtjof Aas, born 1891 at Hadsel, and Amalie née Jakobsen, born 1890 at Kinn. Worked on MS Kattegat that was sunk on 20 May 1942 by a German privateer in the South Atlantic. He was caught prisoner by the Germans and ended up in a Japanese prison camp. Managed to escape and worked later on MS Tricolor. Fell overboard and drowned on 28 October 1944 in Port Adelaide, South Australia. Buried in Port Adelaide. 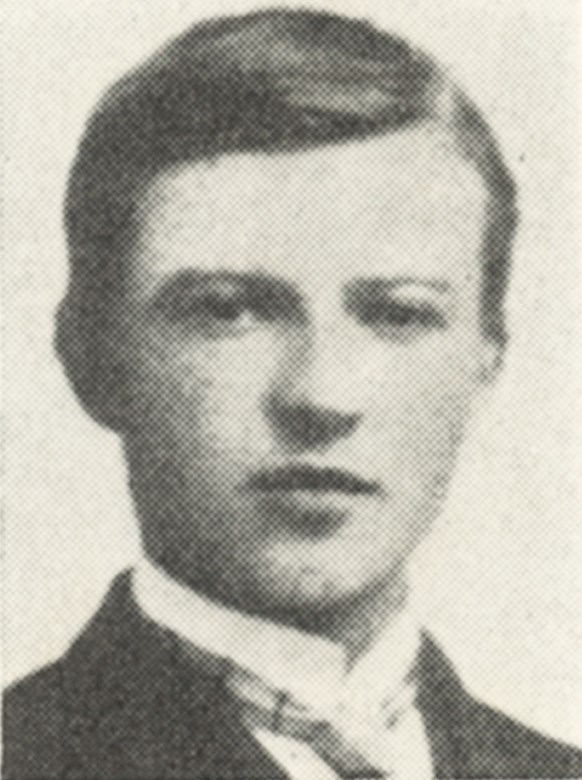 The work of planning a memorial to the men who died from Kinn parish (the municipalities referred to above) was started in the summer of 1945 after the war had ended. An appeal signed by 10 men, dated 23 August, shows that the planning of erecting such a monument in other places in the country was progressing nicely. The ten men who signed the appeal envisage a dignified memorial for the town and villages, and everybody is encouraged to contribute their share according to their means. Those who died deserve a dignified memorial, as it is written in the appeal, so future generations must remember what they did and be urged into action.
In late summer, the memorial committee had collected some 12000 kroner that was deposited in A/S Fjordenes Kreditbank. Hundreds of individuals had contributed, mostly through collection lists in all the school districts.

The whole sum was not collected by means of these lists. Some people contributed in other ways, such as Oskar Nærø. One day the chief municipal treasurer O. Fagerheim in Kinn received a letter, containing the following words:
"Will ask you, if you can please do me the favour of accepting the 12.70 kroner that I paid too much in municipal taxes and give the money to "the memorial of those people from Kinn who died in the war". Is it not Mr Milvær who is supposed to get the money? You do not have to send a receipt as I can read about my donation in the paper "Firda Folkeblad" ". The letter was forwarded to Ragnar Melvær who duly noted that the money had been received. 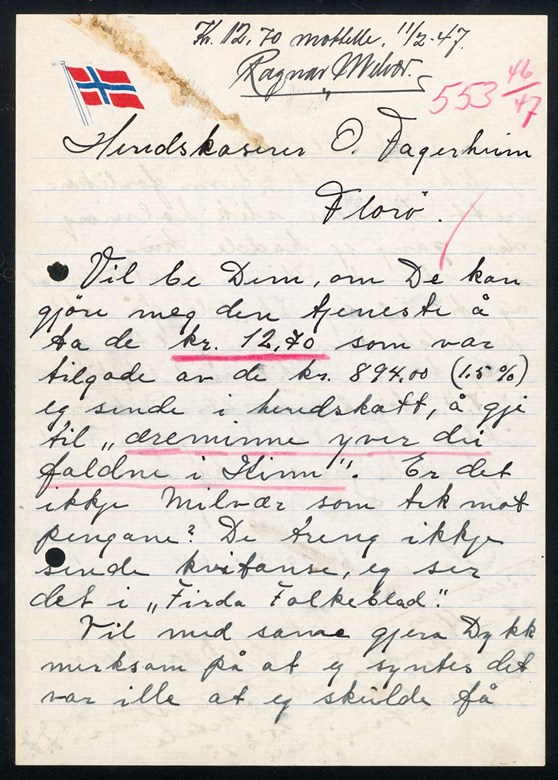 The memorial stone completed in July 1946

A/S Vestlandske Stenhuggeri in Bergen was commissioned to make the memorial stone. The completed memorial was sent as 15 pieces of granite weighing 8.5 tonnes on SS "Jotunheim" on 12 July 1946. The foundation work by the church and the raising of the monument was mostly taken care of by the city engineer. Martin Fredheim transported hectolitres of sand on his boat MS "Sollid" and the nursery Gartneriet Von L/L provided plants and flowers. 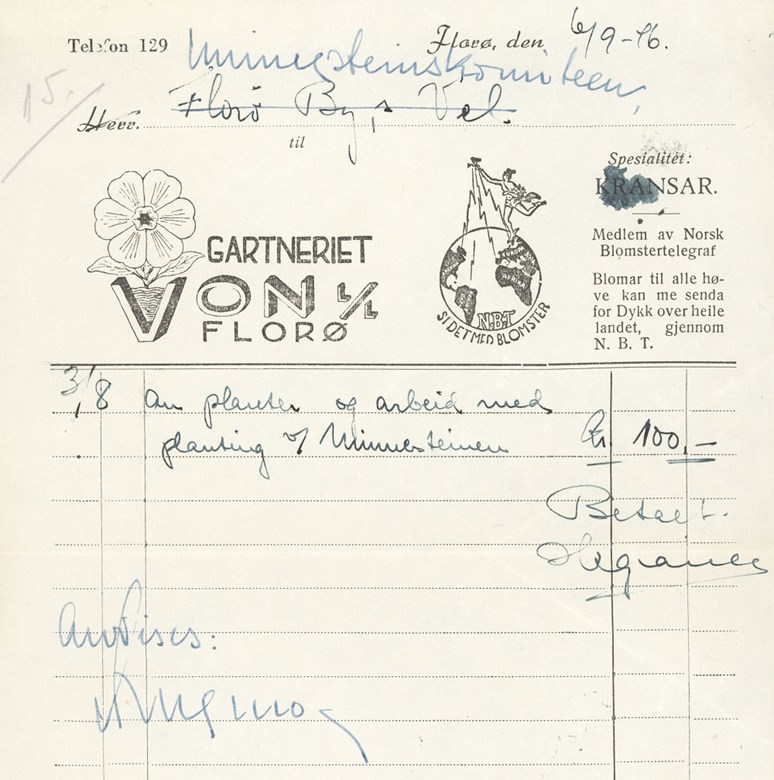 The chairman of the memorial committee, Odd Nybø, opened the ceremony by wishing everyone welcome, and gave information about the work with the memorial stone. Then he called on the county governor, Nicolai Schei, to give the unveiling speech. Schei concluded his speech by reading all the 33 names on the stone before unveiling the stone.
Afterwards the memorial was handed over to the city of Florø. The mayor Stavang accepted, and spoke on behalf of the municipality and laid a wreath. Other wreaths were also laid, from Florø Sportsklubb, Kinn and Skorpa fishermen's association and the Navy high command.

This picture taken in the spring of 2001, shows the memorial by the Florø church commemorating those who died from Florø during the war. A/S Vestlandske Stenhuggeri made the 8.5-tonne memorial in granite that was transported to Florø in 15 sections.
Owner: Fylkesarkivet i Sogn og Fjordane. - Date: 2001. - Photographer: Hermund Kleppa.
Fylkesarkivet i Sogn og Fjordane.
2001.
Hermund Kleppa.

Facsimile of invoice from the nursery Gartneriet Von L/L, Florø, to the memorial committee for plants and work at the stone, dated 3 August 1946, shortly before the unveiling ceremony.