Ålfoten church is a cog-joint wooden longchurch in the village of Ålfoten in the municipality of Bremanger. The church can seat 100, and it was built in the 17th century. For a long time the year 1678 was held to be the year of the construction, but it probably dates from about 1610. Ålfoten church is a ¿sokn" church for the Ålfoten ¿sokn" in the parish of Davik. 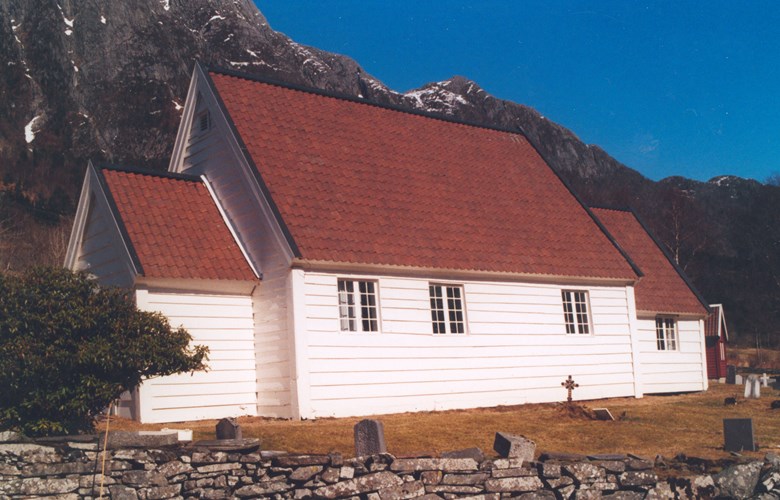 The oldest wooden church in Nordfjord is also the oldest post-Reformation church in the county. No records or sources exist to tell us who built the church at Ålforen, but it might well have been one or more of the itinerant professional builders. Ålfoten church is still in ordinary use, and some years ago it was restored in conjunction with the Directorate for Cultural Heritage.

The small church is hardly noticeable from the main road, but if you find your way down into the village of Ålfoten itself, you will eventually catch sight of a small, white-painted church without steeple. This is the oldest wooden church in the region of Nordfjord.

Ålfoten church can be called a rather unassuming village church. It is far from conspicuous at its location on the hillside above the farm of Myklebust. If you study the church from a distance with its surrounding old stone walls, we are not filled with any special expectations as to what might meet us when we enter the church. As Jakob Aaland puts it in the village history: ¿The church is small and modest". We can easily understand what is meant by this when we take a peek through the latticed windows. Few of our churches have remained untouched as this one, so homely simple and nice.

Opinions have differed as to the exact age of Ålfoten church, but the congregation felt sure about this when they in 1978 celebrated the third centenary of the church with the bishop Thor With on visitation. The celebration was attended by a large number of deans and vicars, local administrators and politicians, villagers and other visitors. Not long afterwards, however, it was revealed that the church had had its ¿secret" celebration some 60 years beforehand. 1610 is probably the correct construction year. Maybe some local people can live to attend both the third and the fourth centenary celebration of the church!

The year 1678 is found on the weathercock above the western gable, and most people have assumed that this was the year that the church was built. Some parts of the interior date from this period or later, which has given support as to the age of the church. On the other hand, this contradicted other information that has been revealed about the church and maintenance records that were carried out at the time the church was supposed to be new. In the late 1680s, a new porch was built instead of a rotten exterior door that was in a bad condition. If the church was new nine years beforehand, it does not make sense that parts of the church were already on the point of rotting.

The altarpiece is one of the arguments used in favour of dating the church back to the early 17th century. Professor Robert Kloster has dated the church to the period 1600-1620. Another ¿proof" came from the vicar Christian Meyer, who served in Davik between 1847 and 1869, is said to have made a note in his visitation report that the church was built as early as 1610. The source of this assertion is unknown, but there is reason to believe that this piece of information is true, as the vicar must have heard this from local people in Ålfoten.

No permission to extend the church

Very little of the interior is painted, apart from the pulpit, the vicar¿s chair, and the altarpiece. The pews have simple doors without any carving or other ornamentation. The small chandeliers are a decorative element in the unusually simple interior of the church room.

About 1911-1913, the issue was raised to tear down the church, but the diocese board of directors disagreed. According to them, the small, well-proportioned church was a delightful adornment in the landscape. The congregation thought the church was too small and was impractical in use when it did not have any vestry. But they were not allowed to build a new church, nor were they permitted to build a gallery which could mean more seats. The architect Egill Reimers was one of those who were commissioned to assess whether it was possible to make any changes. In the annual report from 1915, he wrote that the local population wanted his assessment if it was possible to extend the church - either in the form of an extension or by building a gallery. Either solution was unthinkable. In his description of the church he writes that the whole church is marked by the old builder and carpenter traditions in Nordfjord, and for the benefit of the village this should be preserved. Therefore, the congregation was not allowed to make any changes to this unique building, but they were permitted to do some restoration work on their church.

Prior to the third centenary celebration in 1978, a major restoration work was carried out in conjunction with the Directorate for Cultural Heritage. The porch was insulated and panelled both inside and outside. The chancel was improved, and new beams were installed in the floor, the old stoves were removed, and the electrical wiring for lighting was changed so it would hardly be visible. The church had already electrical heating installed at that time. In this way, the congregation had a functional church for the present and future use, even if the church is too small.

The altarpiece from the early 16th century is a triptych altarpiece in Renaissance style, repainted in 1767. There are three panels, and a top section with gable, side-gables and wings. The bottom halves of the three panels contain catechism texts, and the top halves are decorated with stars against a blue background. This arrangement is hardly original, but is probably a result of repainting. According to an inscription, the vicar Thomas Georg Krog financed the cost of the altarpiece in 1767.

On the altar there are two silver candlesticks from 1922. The Holy Communion objects consist of a chalice and a dish from 1690. The portable altar from the Middle Ages is a flat stone slab in a wooden frame. This has been in the church ever since it was new. The portable altar was used for services where there was no church building, mostly in the early missionary years, but also later.
The pulpit probably dates from 1678. The font and the baptismal bowl in brass are from 1683. The holy water ewer is made of crockery.

The chandelier is a memorial gift from Mr and Mrs Lee from England, after their son was buried by the church. The "Standard" organ from 1990 has five registers. The church bell from the Middle Ages has imprints of the Virgin Mary with the Infant Jesus, the Three Wise Men, and saints. Only the words Ave Maria and Ansgard are legible.

About 1800, the tarred exterior walls were painted white, a colour the church has had ever since. The church has square lattices windows, two on the northern wall of the nave, three on the south wall, and one on either side of the chancel. The windows and the doorways have traces indicating that they have once been smaller.
Owner: Bremanger kyrkjekontor. - Date: 2003. - Photographer: Knut Arne Vadøy.
Bremanger kyrkjekontor.
2003.
Knut Arne Vadøy.

The portable altar from the Middle Ages is a flat stone slab in a wooden frame. It has always been in the church. A portable altar was used for services where there were no churches, primarily in the early missionary period, but also later.
Owner: Bremanger kyrkjekontor. - Date: 2003. - Photographer: Knut Arne Vadøy.
Bremanger kyrkjekontor.
2003.
Knut Arne Vadøy.
resources:
Aaraas, Margrethe Henden m.fl.: På kyrkjeferd i Sogn og Fjordane - 2. Sogn. Selja Forlag. Førde 2000.