Hersvik church is a wooden longchurch located on the farm of Hersvik in the northern parts of the municipality of Solund. The church has a seating capacity of 168, and it was consecrated on 10 November, 1891 by the bishop Fredrik Waldemar Hvoslef. It is built according to the design made by the architect Jacob Wilhelm Nordan for the Fedje church in Nordhordland. Up until 1 January, 2000, Hersvik church served as the "sokn" church for Hersvik "sokn" in the Solund parish. From the same date, the three "sokns" in the parish were united into one "sokn". 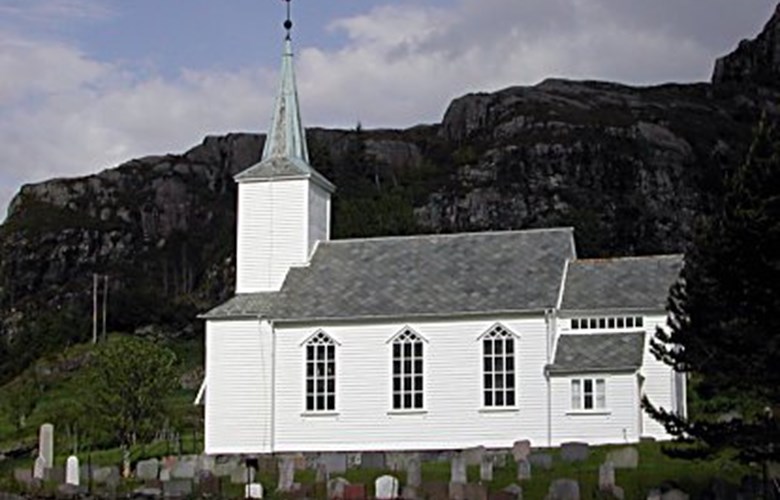 Hersvik church built in 1891, in the same year as the Hersvik 'sokn' was established. The church has a sheltered location on a field. It has a north-south orientation in the terrain, with the chancel and altar facing south.

A house of God in the northern parts of Solund

This northern church in Solund has a sheltered location among the crags of Hersvikvangen, a short distance from the fjord and the church quay. From the quay there is a walkway leading up to the church, a well-trodden footpath for the many generations of islanders. Nowadays the rowboats have been replaced by much faster and more comfortable boats using the modern harbour to the north of the church.

A long time ago there was a chapel on the island of Lågøy that people in the northern parts of Solund probably belonged to. It is said that there is a written reference from the 1280s to this chapel along with the Utvær chapel, but there is some doubt as to how long this chapel was used. Later on, throughout many centuries, the church sites at Vilnes in Askvoll and Øn in Hyllestad were well established until the Hersvik church was built.

Raised money to build their own church

The reason why the Hersvik church was built was the fact that Solund became a separate parish in 1887. A precondition for this new establishment was that people who lived in the municipality would be included in the parish. The problem, however, was that the church at Hardbakke did not have enough seats to comply with the law. Consequently, representatives from the northern parts of the municipality started the planning to build their own church at Hersvik. The vicar, the municipal council, as well as the people themselves seem to have co-operated closely in this matter.

In 1890, accounts show that money was being raised for the church, the location of the site had been decided, and the foundation wall had been put up by means of duty work. The construction work itself was started in the spring of 1891. By the end of the year, however, it turned out that the expenses for the building material as well as payments to the workers amounted to some 8 500 kroner. This sum was substantially lower than the calculated costs, but still more than the "sokn" could afford. The matter was resolved when individual persons around on the islands lent money to the undertaking. The collection efforts continued and most people contributed according to their means. Crofters and fishermen gave on average 10 to 15 kroner each, whereas more affluent farmers could donate up to 400 kroner each. 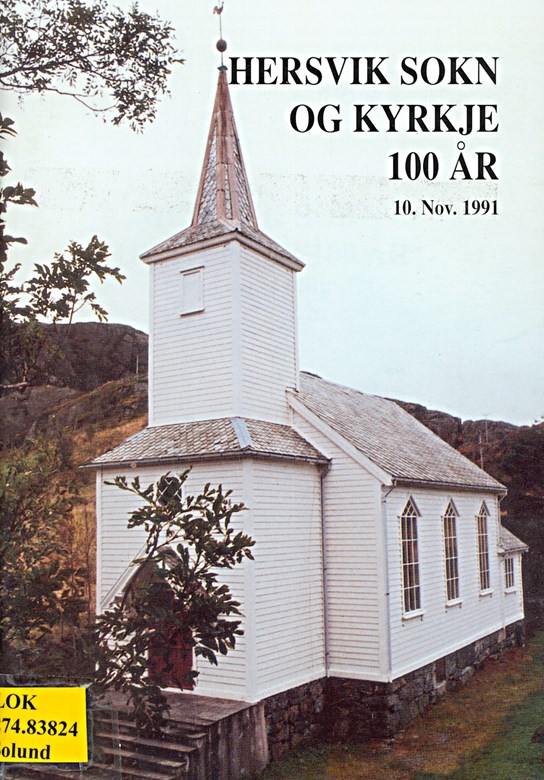 The nave is 10.4 metres long (about 34 feet) and 7.8 metres wide (about 26 feet). The chancel measures 4.4 by 4.4 metres (about 14 by 14 feet). A barrel vault was built instead of a flat ceiling in the nave, and for this the vicar and the building committee were severely reprimanded by the Ministry of Church Affairs. The design called for a flat ceiling and the Ministry thought that the building had been constructed without the proper approval. The steeple is not placed on the main roof itself but has been erected above the porch.

The church today looks almost the same as it did when it was built. Throughout the years only minor changes have taken place. A few years after the completion of the church, leakage was observed in the steeple and on the south wall. This problem was solved by attaching iron plates. Originally there was a window on the east wall of the chancel, but his was removed in the 1920s because of the new altarpiece. Before that time a simple cross served as an altarpiece. At the same time a narrow strip of windows was inserted on the upper part of the side walls of the chancel, as requested by the artist Mons Breidvik. In his opinion, daylight from both sides would most effectively put the altarpiece in a good light, as it were.

Standing inside the church you can easily get the feeling that time has stood still. The only change that has taken place is the colour scheme. The nave ceiling is painted in blue and is indeed a beautiful sight. The flat ceiling in the chancel is exactly the same as when it was new, formed as a rosette in all the colours of the rainbow. When the church was repainted in 1953, the walls got a light, almost off-white colour. The earlier brownish-yellow pews were painted grey. The columns under the gallery were painted in a light-green colour. The main colour scheme before the restoration work was violet, brown, and yellow. As is the case with Husøy church, the many carved decorative mouldings give the church a unique character. Most likely it is the same artist behind the carved decorations in these two churches. Similar carvings are found on the upper part of the walls, along the gallery front, on the pulpit, as well as in other parts of the interior.

For the first few decades the church had no heating. Stoves were probably not installed until about 1915. The first organ - a hand-pumped harmonium - came about 1930. It served its purpose for nearly forty years until a new organ was bought. Electrical lighting and stoves were installed in 1962. Hersvik church is the only church in the parish to have electricity-operated chiming, and an obvious reason for this may be the extremely narrow and steep staircase leading up to the church bells.

The altarpiece from 1920 is painted by Mons Breidvik. The painting shows how Jesus saved Peter from drowning during the storm on the Lake of Gennesaret (Matthew 14;33). Peter's cry for help "Lord, save me!" is written under the altarpiece to underline the message.

On the altar there are two three-branched candelabras in German silver, probably from 1981, and two silver candlesticks from 1955. The Holy Communion objects in German silver consist of a chalice and a dish (undated), a pyx and a wine cruet (from 1955), and another wine cruet in black faience with a gilded cross (undated). The pulpit and the font date from 1891. The baptismal bowl and the holy water ewer are both in silver and date from 1953.

The organ from 1995 has 3 ½ registers, and is built by Orgelbouw Gerrit C. Klop, the Netherlands. The church bell from 1891 is made of steel with the inscription: "Geg. V. Bochumer-Verein" and "Hersvig Church 1891". 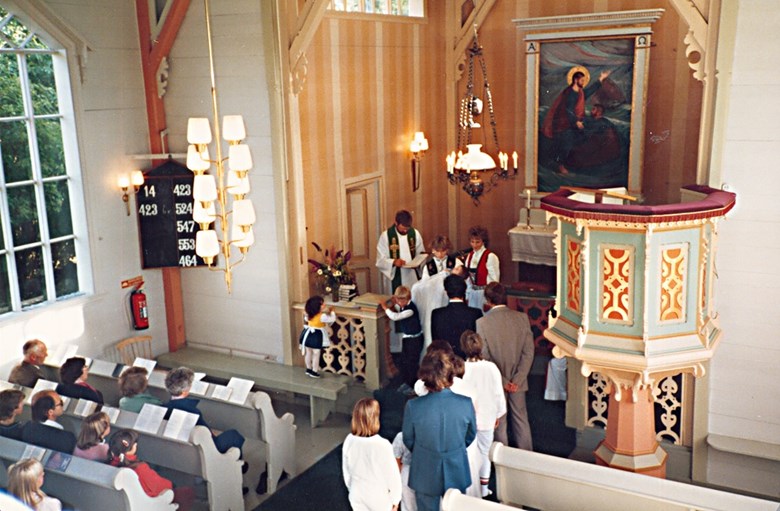 Carved decorative mouldings are found on the upper part of the walls, along the gallery front, and on the pulpit. They contribute significantly to the distinctive character of the church. The church was last painted in 1953, skilfully carried out by the master painter Jon Atterås. The main colour scheme of violet, brown, and yellow was replaced by light walls and grey pews. The chancel ceiling is painted with all the colours of the rainbow towards a beautiful rosette.
Owner: Hans H. Steinsund. - Date: 2002. - Photographer: Hans H. Steinsund.
Hans H. Steinsund.
2002.
Hans H. Steinsund.