A short distance to Shetland and a rugged coastline with good harbours and excellent hiding places for people and vessels were the reasons why Solund became so important in the traffic to England during the Second World War. A total of 70 - 80 women and men from Solund got across to Shetland in this way. 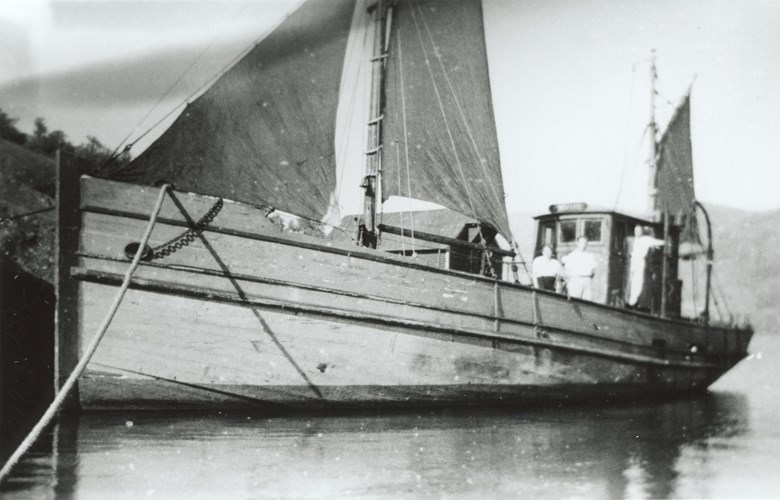 The M/K Fremad II, 63 feet, from Pollen, went across in October, 1941, carrying ten persons. The trip took 24 hours to North Shetland. 22-year-old Sverre Pollen captained the boat, which returned in 1946, then with sails.

The majority were young people

No contacts organized escape routes out of Solund, but there were surely those who gave tip-offs. Although the crossings were made quite spontaneously and in the deepest secrecy, there were many people from Solund and others under deck on that late evening when the first boat left. Several had for quite a long time been under cover, waiting for a chance to go. Open and covered vessels set out on the daring trip, and 70 - 80 women and men from Solund got across to Shetland in this way. 1941 was the peak year, in the autumn before the winter storms.

In the darkness of the night

The circumstances were quite favourable to return radio operators, saboteurs, weapons, and ammunition. Much of this had to be hidden, until transport eastwards on the Sognefjord could be arranged. Well-known fishing vessels and smaller vessels that took part in this traffic sailed in dark nights, unloading or picking up key persons. In the wheelhouse and the engine room, people with local knowledge of Solund would stand. But great caution was required. In addition to patrolling security boats, navy vessels, and a sinister Nazi fishing vessel in the shipping lanes, there were three German security posts on land, four in the last war year.
The crossing to Shetland was difficult and hazardous, but there was in truth no less risk on land on many occasions.

Ropes and chains were cut

The treacherous skerries to the west were a defence against the German military power, but fishing vessels and smaller vessels fared better, although all lights and buoys in the shipping lanes were switched off during the war.
Almost all of those who were asked to lend their vessels for a Shetland crossing, said yes. A good many would rather lose the vessel to runaways than to the Germans. Larger vessels were in danger. Therefore ropes and chains were cut in arranged thefts, or the father claimed that his son had left with the boat, and a third boat owner left home while his boat was away. The consequence of wise conduct was that no vessel owner in Solund was persecuted by the Germans.

Several dangerous situations arose because vessels were not strong enough and sprang a leak in heavy sea, or the engine was not reliable. They in such cases had to return to safety and were easily detected. It was difficult to hide as many as 16 - 17 runaways while efforts were being made to find a better vessel. It was then good to hear the shopkeeper at Indrøy: "I will have nothing to do with this, but my boat is at the moorings and ready to sail!" When bunker was short, the shopkeeper at Kalgraff was a name that easily came to mind for the insiders.

In all, eight covered vessels sailed from Solund to Shetland: the M/G Ingeborg, the M/K Stølsgut, the M/S Laila, the M/S Steinborg, the M/K Stål 1, the M/G Fiks, the M/S Telma, and the M/K Fremad II. In addition to these, one person from Solund went across in the 20-foot fishing boat Set from Rubbestadneset. All on board made it to safety, albeit quite exhausted. People from Solund left also from other places, and others went with them from Solund. 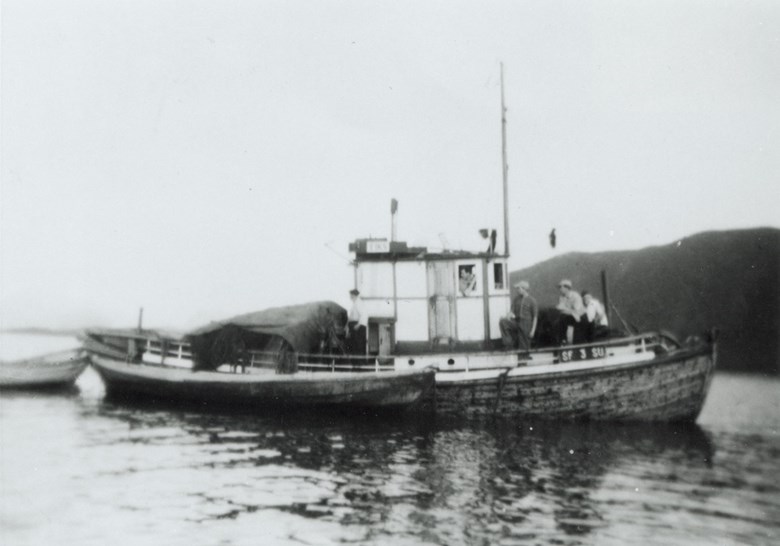 Toward the end of 1943 the crossings became safer, because the three so-called Shetland buses (motor torpedo boats, MTBs) were put into the traffic. Yet MTBs operated more often in Solund, although the fuel caused problems for the return trip since these boats used petrol. 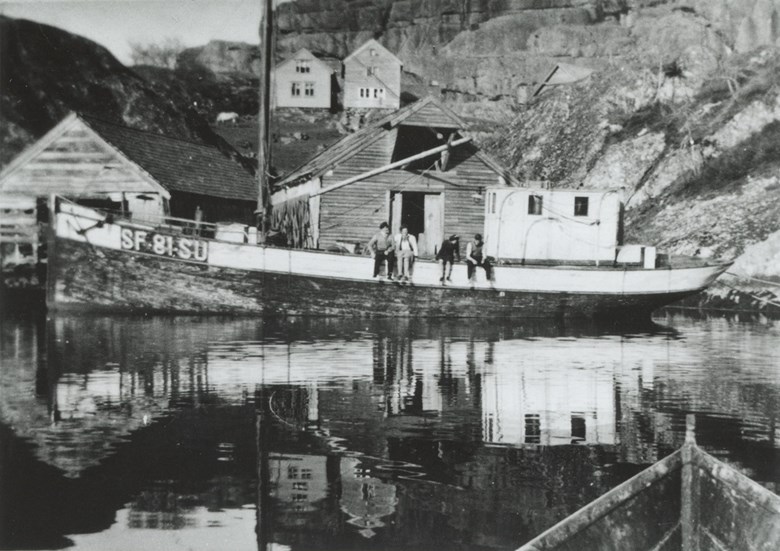 The M/G Fiks, a seine vessel of 44 feet and a modified stern, went across in October, 1941. 17 young men were onboard, several of the Lambrechts family. Skipper was Karl Lambrechts, who was trained in the special service of the navy, and he made several trips across the North Sea. At some time in 1943, he picked up the rest of the family.
Owner: Hans H. Steinsund. - Date: Ca. 1950. - Photographer: Ukjend.
Hans H. Steinsund.
Ca. 1950.
Ukjend.

The M/S Telma, of Hjønnevåg , 40 feet. She left in October, 1941, with 11 persons. Skipper and engineer was Andreas Geiterøy. A storm from the north-west came upon them, a wave capsized the boat, half filled it with water, and damaged the wheelhouse. After they ran aground on a reef near Sanday on the Orkneys, they were saved. Andreas was lost the year after with the Feiøy.
Owner: Hans H. Steinsund. - Date: Ca. 1940. - Photographer: Ukjend.
Hans H. Steinsund.
Ca. 1940.
Ukjend.