Halvard Benjamin Trædal from Indre Oppedal lost his life in action in Valdres on 26 April 1940. He was first buried in Valdres, but his remains were moved home the same autumn. "Oppedal Ungdomslag" immediately took the initiative to raise a memorial stone on his grave, and in the spring of 1941, the stone was unveiled. 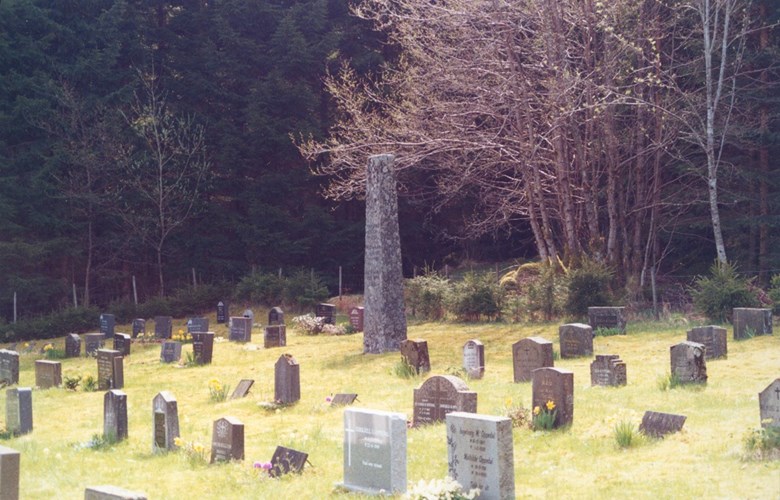 The memorial stone for Halvard Trædal who fell in action in Valdres on 25 April 1940 stands on his grave in the graveyard Fred at Indre Oppedal.

The memorial stone for Halvard Benjamin Trædal stands on his grave on the churchyard Fred at Indre Oppedal. It is some two metres high, some 60 centimetres on all four sides at the bottom, tapering off somewhat towards the top. Originally there was a stone frame in front, but this has later been removed so that the stone now stands in the grassy ground with only a small area for flowers at the front.
The stone has the following inscription: HALLVARD * BENJAMIN * TRÆDAL * BORN 14-4-1916 * FELL IN ACTION IN VALDRES * 26-4-1940 * YOU GAVE EVERYTHING * FOR OUR * COUNTRY
At the back: RAISED BY * THE HAMLET * IN DEEP * GRATITUDE 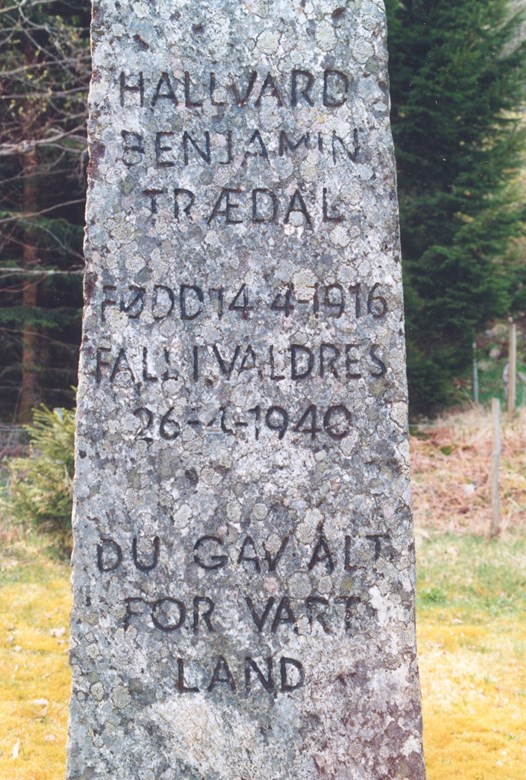 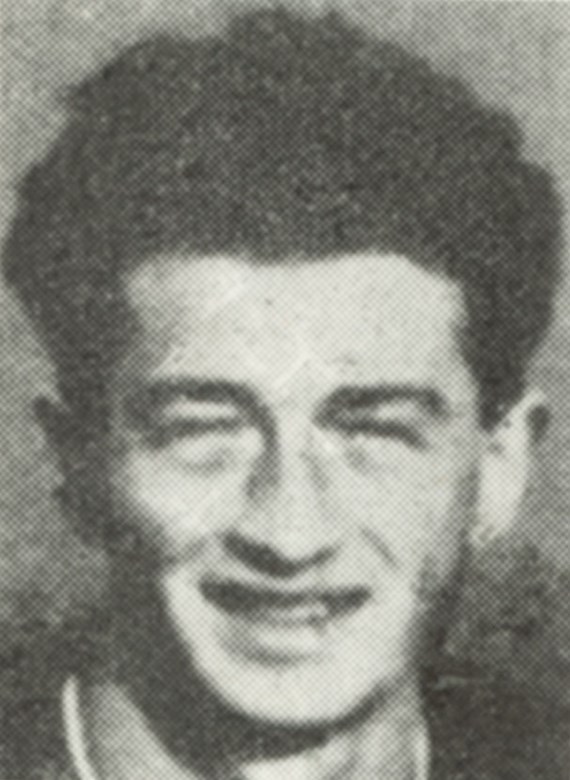 Fell in action at Bagn

When war broke out in Norway on 9 April 1940, mobilized troops from Sogn og Fjordane met at Bømoen at Voss. The night of 17 April about 2000 soldiers were transported by train eastwards to join the 4th brigade, whose object was to stop or slow down German troops advancing from the south towards Etnedal and Valdres. The campaign in Valdres lasted until 29 April when the Norwegian forces capitulated.
In the morning of 25 April, Trædal was in a group of some 30 men, marching from the farm Hovda towards Dølve at Bagn. During a short exchange of fire with a small German force, two Norwegian soldiers were killed, Torbjørn Riber from Eidfjord and Halvard Trædal. They were first buried at Bagn, but were later moved to their home places.

"The hamlet raised the stone"

"Oppedal Ungdomslag" (youth association) took the initiative to raise a memorial stone on Halvard's grave. With others in the hamlet they raised the necessary means, and started the work, led by the chairman of the association, Hallvard H. Oppedal.
Kåre Oppedal (1914-2000) was a road worker and a good stonemason. In a road cutting close to the graveyard on the new road between Indre and Ytre Oppedal they found a suitable slab. They wedged it loose and formed the stone by means of simple road worker tools such as sledgehammers and hammers. Johannes J. Oppedal helped with blacksmith work by whetting tools and making small chisels for carving the inscription. Alf Oppedal drew the letters on the stone and Kåre H. Oppedal carved them into the stone. The hamlet took care of everything, and in the spring of 1941, the stone was completed.

Vicar Hjalmar Storeide at Solund gave the unveiling speech. In his speech he inserted words he had suggested as an inscription, but which contained so many letters that they did not dare to carve them. His suggestion was:
Han er levande framom andre
han som fall for fedrelandet 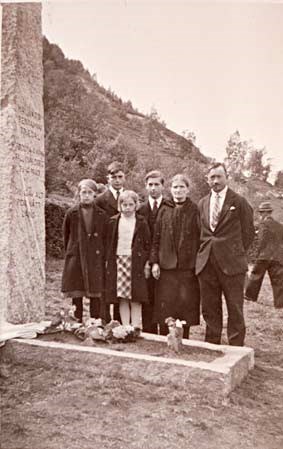 The inscription at the front of the stone. Vicar Hjalmar Storeide had suggested a text that was too long to carve, and a shorter version was chosen. Some people have maintained later that the Norwegian language in the inscription was not quite correct.
Owner: Fylkesarkivet i Sogn og Fjordane. - Date: 2001. - Photographer: Hermund Kleppa.
Fylkesarkivet i Sogn og Fjordane.
2001.
Hermund Kleppa.
resources:
Bragstad, Jakob:Fjordane infanteriregiment nr 10 i gamal og ny tid. Oslo 1996.
Sogns Ungdomslag 50 år. 1947.
Opplysningar frå:
Håkon Olav H. Oppedal, f. 1908, Oppedal, Gulen.