The road through the Flåmsdalen valley - construction road and tourist road

In 1893, the Norwegian Parliament - Stortinget - decided that the Oslo-Bergen railway line would go by way of Voss and Myrdal. The construction of the railway line made it necessary to build a construction road between Flåm and Myrdal. This road was completed in 1898. The road and the railway construction created a new and changed community in the valley of Flåmsdalen. New occupational groups emerged, and the tourist traffic became an important industry. Even today the road is an important element for the tourist industry. Some 16 000 bikers use this road in the summer months. 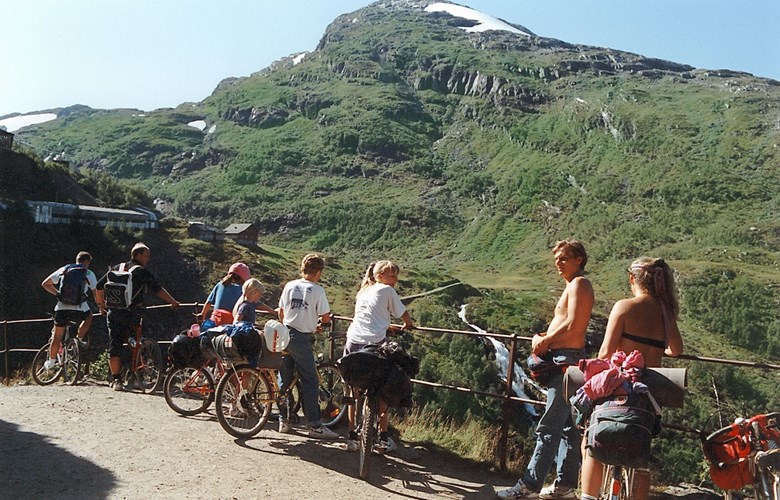 When the Flåm Railway was taken into use in 1940, the traffic on the road up to Myrdal was reduced, but from the 1990s, the road once more became an important part of the tourist experience. The Navvy road as it is called today is now a major tourist attraction. The biking trail is now very popular, from Haugastøl and down the sharp turns from Myrdal and further down the valley to Flåm station. The distance between Haugastøl and Myrdal is 80 kilometres. The Navvy Roas was opened as a bike trail in July 1974.

The issue was raised to build a proper road up the valley of Flåmsdalen as early as the 18th century. In 1778, all vicars, district magistrates, tax collectors and company commanders were ordered to give a situation report of the roads and bridges in the Bergen deanery. The vicar of Aurland, Jens Brun, had this to say about the roads at Flåm. The main road up from the sea up to the church at Flåm was a riding path, but could be used as a cart road if the stones in the road were broken up and removed. The riding path further up the valley was very steep and extremely exposed to snow avalanches and rock slides. After an inspection tour conducted in 1782, a new road up the valley was estimated to cost 3000 "riksdaler". This was too expensive, and nothing came out of it. 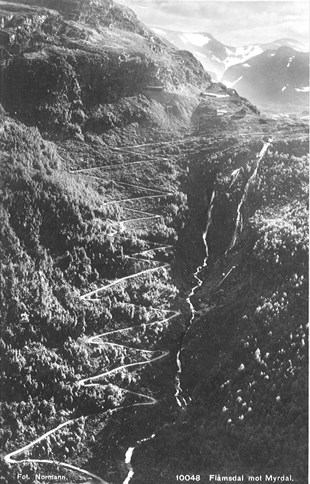 New road with the first road tunnel in the county

The construction of the Bergen railway line opened up new possibilities. The construction work was carried out at several places at the same time. The Gravhals tunnel was drilled from both sides. For this reason, transport roads had to be built both from Voss and Flåm. The Storting decided to build a new road between the Flåm church and Kårdal, and the necessary means were allocated in the railway budgets for 1895,1896, and 1897. The 11.8-kilometre-long road with a width of between 2.5 and 4 metres were estimated to cost 249 400 kroner. The Public Roads Administration was in charge of the construction and the whole distance was completed in the summer of 1898.

The old road between Flåm and Melhus followed a line on the western side of the valley, but due to risk of avalanches the new road was built in a tunnel on the eastern side. The Kårdal tunnel was the first road tunnel in the county. It is 117.5 metres long, 3.55 metres wide and 4 metres high. 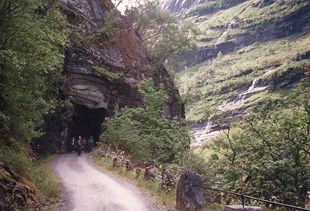 From Kårdal up to Myrdal, 860 metres above sea level, a four-kilometre-long construction road was built with 23 hairpin turns up the steep mountainside. This part of the road had a height difference of 350 metres. The work on the Gravhals tunnel from the east started in 1896, at the same time as the road construction up the valley was going on. Between 60 and 70 men worked on the road, whereas about 130 men worked on the railway line. The Norwegian State Railways was responsible for this road section, which was completed in 1896 at a cost of 23 700 kroner. Another construction road was built along the railway line from Myrdal to Haugastøl. This was completed in 1902, which meant that there now was a cart road all the way from Flåm to the valley of Hallingdal and further east. 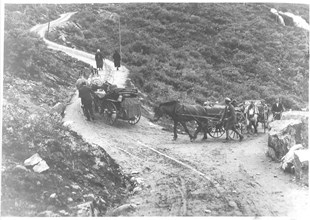 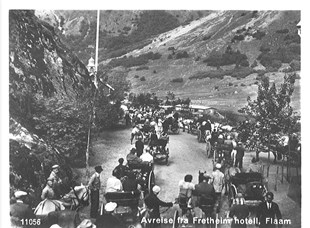 The County Council had accepted to pay for the maintenance of the road between Flåm and Myrdal. The road then had to be built in such a way that it could serve as a connecting road for the district to Myrdal station. Afterwards the Public Roads Administration was dissatisfied with the road standard between Kårdal and Myrdal, which they thought was not built in accordance with the plans agreed upon. The road was hardly navigable after the construction work on the Bergen railway line because the maintenance had not been taken care of properly. For this reason, the responsibility was then shifted over to the Norwegian State Railways. The road between Flåm (Fretheim) and Kårdal was classified as a main road until 1940, and this is the only main road in the county, which has never been classified as a state highway, or county road. Today the road is a municipal road.

The traffic changed the valley of Flåmsdalen

The road along the valley was vital for the ongoing activity during the construction of the Bergen Railway and later on the Flåm Railway. The period between 1894 and 1940, when the Flåm Railway was opened for traffic, was a very busy period in the valley. Horses and people with material for the railway construction shuttled back and forth between Flåm and Myrdal. When the Bergen Railway was completed in 1909, there were regular daily steamer stops at Flåm, and the post was carried up to Myrdal three times a week. Coachmen drove tourists between the fjord and the mountain station, and new hotels, country stores, cafés and school buildings were built. The quiet agricultural valley of Flåmsdalen was in a matter of some decades in the early 20th century transformed into a busy village with new industries.

It was heavy going uphill for the horses that could hardly manage more than 100 kilos at a time. Normal loads up to Kårdal could be 200-300 kilos. The road was in fact so steep that tourists had to walk the last four kilometres up to Myrdal in the summer, as we can see in this picture.
Owner: Aurland kommune, Lokalhistorisk fotoarkiv. - Date: 1898-1930. - Photographer: Ukjend.
Aurland kommune, Lokalhistorisk fotoarkiv.
1898-1930.
Ukjend.

In the summer months the traffic was heavy along the road. On busy days there could be between 30 and 40 carriages with tourists to and from the Bergen train. It took more than four hours to cover the distance from Flåm to Myrdal. Transporting people and goods became an important source of income for farmers and created a new industry. As early as 1906, when the Bergen line was completed to Myrdal, the traffic increased. In 1909, licenses were given for 70 horses in the valley of Flåmsdalen. Frequently farmers fought to get passengers.
Owner: Aurland kommune, Lokalhistorisk fotoarkiv - Date: 1898-1930 - Photographer: Ukjend
Aurland kommune, Lokalhistorisk fotoarkiv
1898-1930
Ukjend

The picture shows how the transport was carried out in winter. The road was very important for the construction of the Bergen railway also in wintertime, as the tunnel work was going on all the year round. As a rule the road was closed in November. Some years, when there was little snow in the mountains, a winter road was kept open across the mountains from April. Even if soil was spread on the snow to speed up the snow melting, and the snow removed by spade, it was rarely opened until midsummer. For a period goods and equipment were transported by means of a turbine-generated lift at the foot of the Myrdal turns and up along the mountain to an area close to Vatnahalsen. In this way they could transport more goods faster, and horses were spared. Unfortunately, the wire broke and horses had to take over once more.
Owner: Aurland kommune, Lokalhistorisk fotoarkiv - Date: 1998-1909 - Photographer: Ukjend
Aurland kommune, Lokalhistorisk fotoarkiv
1998-1909
Ukjend

At Myrdal station horse carts waited for the trains from Bergen and Kristiania (Oslo). During the first few years there was no stable for the horses at Myrdal. In 1918, the "Bergen Dyrebeskyttelsesforening" (Federation for Animal Protection) allocated 200 kroner to build a stable.
Owner: Aurland kommune, Lokalhistorisk fotoarkiv - Date: 1909-1930 - Photographer: Ukjend
Aurland kommune, Lokalhistorisk fotoarkiv
1909-1930
Ukjend