Askvoll church is a wooden longchurch located in the village of Askvoll. The church has a seating capacity of 425, and it was consecrated on 13 December, 1863 by the dean Johan Carl Christie. The artist Anders Askevold designed the church. Askvoll church is the "sokn" church for Askvoll "sokn" and also the main church in the parish of Askvoll. 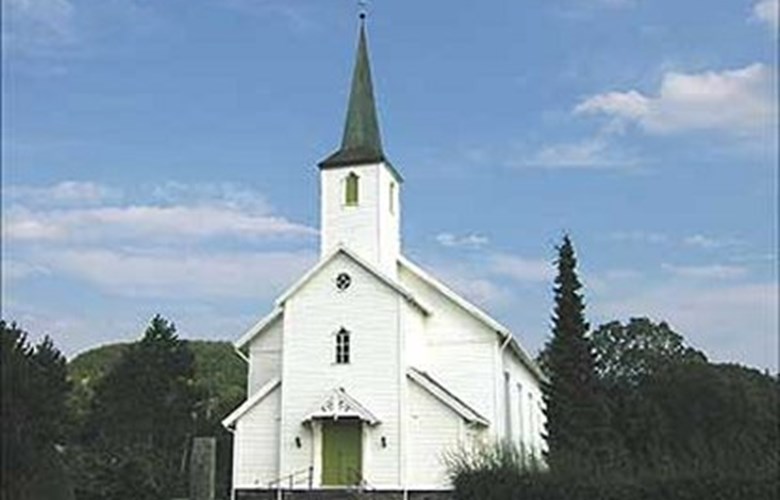 The Askvoll church is not designed by an architect, but by one of the famous men of the village, the artist Anders Askevold. The church has a simple, classical architecture. The master builder was Christian Veland from Lindås.

When the Askvoll church was new, people in the village talked much about their dissatisfaction with the architecture of the church, compared to the previous one which burned down a mere three years after it was completed. The new church was a traditional longchurch, whereas the old one was an unusually elegant cruciform church. It took many years before people could accept the new building erected on the site of the fire down by the fjord.

The church was consecrated in December, 1863, just some four years after the congregation last met for the consecration ceremony. The former church was struck by lightning and burned to the ground. The new church was much debated, and public opinion was not particularly positive. In his "Remembrance protocol" the pastor Bernt Askevold put it like this: "The new church was built with a simple steeple which rose only a few feet above the roof ridge and with a big wooden cross at the other end of the ridge. But people have never liked the simple shape of the church steeple."

The main objection of the critics, then, was that the wooden cross was meant to serve as a steeple on the church, and, after some 30 years, in 1896, it was replaced by a "proper" steeple. This new steeple was much higher and pointed, and people thought this gave the whole building a somewhat prouder character. The artist Anders Askevold from Askvoll had designed the church with the steeple that people objected so much to. The new steeple was erected based on the design by the master builder P. Gabrielsen, but Askevold was asked for advice beforehand. The latter then made some suggestions what should be done. As a model they used the Dale church in Fjaler. Eventually this put an end to the discussions concerning the church building.

Even if the exterior of the church is highly traditional, once you enter its doors the church offers some surprising details. The most unusual architectural feature is undoubtedly the galleries on either side of the chancel. Nowadays these galleries serve only a decorative purpose, but at the turn of the last century, the first organ in the church (1898) was placed on the northern gallery. The other gallery we suppose was used by those who wanted to get a good view of the congregation as well as hearing as much as possible of what was going on at the front end of the church. The chancel itself has five sides in the octagonal form, and it also has an unusually big, oval altar rail. On the sides there are blue-painted benches in the same colour as the pews in the nave. The ceilings of the nave and chancel are identical, apart from furthest to the east where it ends after the form of the walls. The ceiling and wall posts are painted in a greyish tone, whereas the nave columns have a soft pink colour. A fine detail on these columns is the glass lamps with the cross as the motif.

The protruding gallery on the west end was extended forward along the sides when the church got a new and much bigger organ in 1927. The church has three big and very simple windows on both sides of the nave walls, which provides good light inside the church. In the chancel the two windows closest to the altarpiece have a narrow cross in glass mosaic, almost as high and wide as the windows themselves. The windows above the two small galleries also provide light for the vestries below.

Throughout the years, various kinds of maintenance work have been carried out, particularly on the steeple where many leakages have occurred. In 1995, a new baptismal room was built on the southern side of the porch, and at the same time toilet facilities were finally built. A special toilet for handicapped people was also built then on the north side just inside the side door. There are staircases leading up to the gallery from both sides in the porch.

The altarpiece commands attention because of its artistic value and its dramatic history. It was painted by the artist Anders Askevold in 1859 at an age of 25, and he donated it to the congregation in connection with the consecration of the former church in Askvoll. When the cruciform church was burning down in 1862, some men had the presence of mind to break open the main entrance door. They were not able to save much of the interior art objects, but they eventually managed to break up the framework of the altarpiece and carry it to safety through the back door.

The local council bought new framework for the painting, and this beautiful altarpiece now has the place of honour in the present church. It depicts Jesus at prayer in the Garden of Gethsemane with sleeping disciples in the background. A compassionate angel appeared and strengthened him (Luke 22;43) Underneath we find the inscription from John 1;29: "Behold the Lamb of God, which taketh away the sin of the world." In 1860, Askevold painted the same motif for Solund church; in 1862, also for Brekke church. Later on, in 1865, he painted the altarpiece in Kaupanger, and in 1879 in Birkeland in Bergen, with Christ's Resurrection as the motif.

On the altar there are two brass candlesticks from 1696. The Holy Communion objects consist of a chalice and a dish from 1859, a pyx from 1939, and two wine cruets from 1697.

We find three portrait paintings. One is from 1890, portraying the vicar G. P. Harbitz, painted by Kr. Olsen. Another is a portrait of the vicar Johan C. Christie, and the third shows the vicar O. Lyngstad.

The organ dates from 1904 with 14 registers, made by Olsen and Jørgensen. The church bell from 1882 has the inscription: "This church bell was originally donated by the Askvoll congregation 1863. May your hearts accept the sweet message of grace. Today! Today! Today!" The bell which was given in 1863 was damaged in 1882. The bell foundry owner at first sold this bell without replacing it with a new one, but was finally forced to buy a new bell from the company of R. Wallendahl in Bergen. This new bell was made by "der Bochumer Verein für Gußstahlfabrikation".

From the funeral of the two Norwegian pilots Anton Hagerup and Just Finne. They lost their lives on Midsummer's Eve in 1943, when their plane crashed on the beach close to the house of Chester Saltskår. German soldiers formed the guard of honour at the funeral.
Owner: Fylkesarkivet, SFFf-96213.0083. - Date: Sommaren 1943. - Photographer: Abraham Strømmen.
Fylkesarkivet, SFFf-96213.0083.
Sommaren 1943.
Abraham Strømmen.