Fjærland church is a so-called longchurch built of wood situated on the farm of "nedre Mundal" in the municipality of Sogndal. The church was built in 1861, designed by the architect Christian Henrik Grosch. The architect Johan Lindstrøm was responsible for the extension design of the church in 1931. The church was re-consecrated on 13 August, 1931 by bishop Andreas Fleischer. The church has a seating capacity of 300. This church is a "sokn" church for Fjærland in the parish of Sogndal. 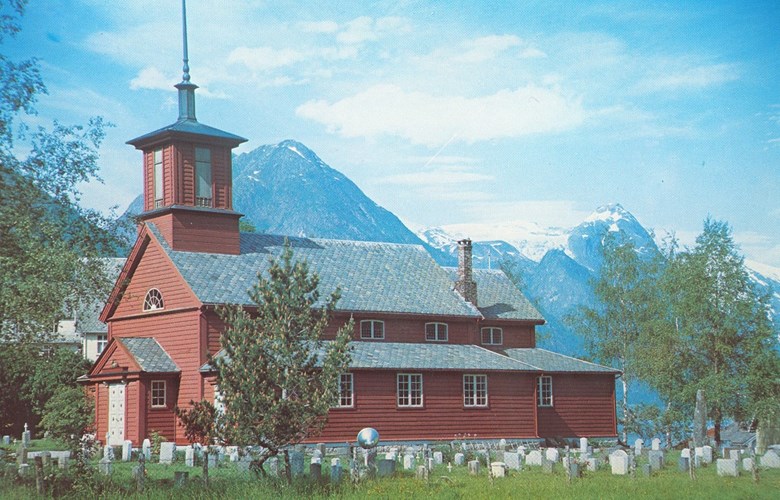 The side aisles along the church were built in 1931, which gave the church a completely new style. The exterior was painted red the following year

The first steamers started regular routes on the Fjærlandsfjord in 1861, in the same year as the new church was completed near the quay at Mundal. The fjord steamers constituted the main, vital artery of communication in Fjærland until the village was connected to the national road network. If the local inhabitants had business with any public office, clergyman or mayor, they would have to travel all the way to Holmen in Balestrand. This centuries-old administrative connection was brought to an end when the people of Fjærland by a slim majority in a referendum decided that Fjærland should be incorporated in the municipality of Sogndal from 1 January, 2000.

From shoddy to elegant

When the church specialist Bendix Bendixen paid a visit to Fjærland in the 1890s, he observed that the village had a small and rather shoddy, white-painted wooden church. The church had a porch and broad, square ridge turrets above the western gable wall. The chancel was slightly narrower than the nave, ending in a right-angled wall. Behind the chancel was a low vestry in line with the church. At first the architecture and interior of the church was far from elegant. The interior had a low, white-painted pitched ceiling. The chancel and nave walls were unpainted. On the other hand, the pews and other parts of the interior were painted yellow. There were windows in the walls with coloured windowpanes in the upper triangle.

After the reconstruction work of 1931, the church got a more traditional style. Formerly it was painted white in a fairly typical longchurch (basilica) style, but this was radically changed in 1931 with the addition of new side aisles along the whole church. Consequently, the nave was widened and the number of seats increased from 240 to some 300. The extension also meant that there were two new rooms on either side of the chancel, separated from the chancel with some plain posts. The local people of Fjærland have jokingly named these rooms "stalls", and they are taken into use whenever the church is full.

The red-painted church by the fjord

In connection with the major reconstruction work in 1931, the exterior was painted red. The characteristic building style of the church is based on the stave church model, but in a more modern and simplified form. The former high and narrow windows with their pointed arches on the side walls were replaced by small-paned windows only half the previous size. The shape of the turret was also changed by the replacement of the copper-covered steeple with a rod topped by a cross. 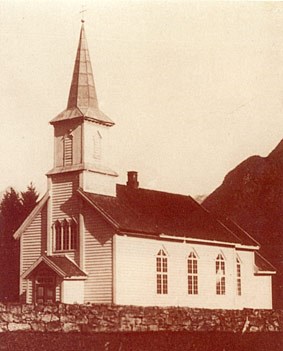 Of all the churches in our county, the Fjærland church is most likely the only one to have almost been covered with snow. This actually happened in 1981. Down by the fjord the ground was covered with 2.2 meters (some seven feet) of snow. As the snow kept falling, it eventually covered the nave windows. The result was that the only outside light came from a narrow strip of windows high up on the walls. But the road leading up to the main entrance was all the time swept clean so people managed to get inside. This elegant church is solidly built to weather the drifting heaps of snow. In wintertime, the red colour of the church makes a nice contrast to the white snow. On a grey spring day, the red-painted church gives a special warmth and glow to the surrounding countryside, the snow-clad majestic mountains, and the cold Fjærlandsfjord only a stone's throw away from the church. 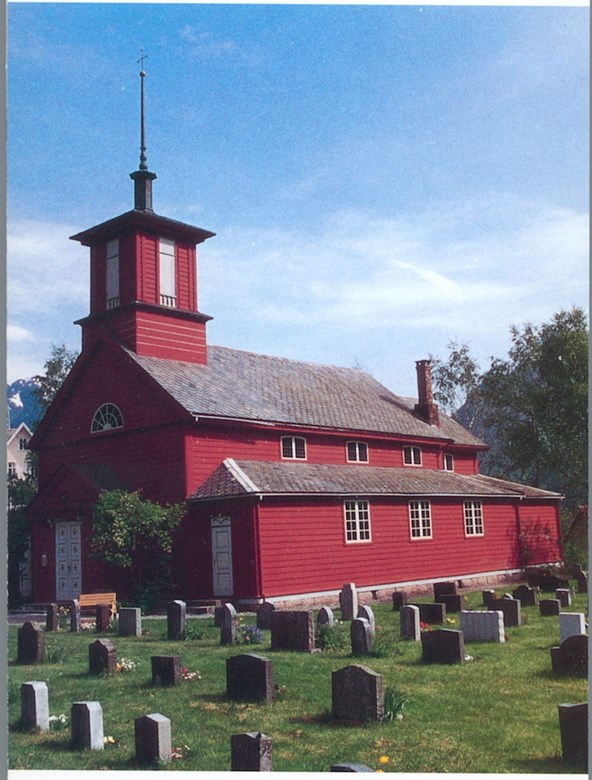 The central altarpiece from 1931 is painted by Bernt Tunold. The motif is taken from the "Emmaus wanderers". The other sections of the altarpiece are carried out by the local artist Harald Rutle. The altarpiece bears the inscription from Luke 24; 28-29: "And they drew nigh unto the village, whither they went: and he made as though he would have gone further. But they constrained him, saying, Abide with us: for it is toward evening, and the day is far spent. And he went in to tarry with them." Another altarpiece probably dates from 1861. This is a cross against a green background, which is now placed in a room on the right-hand side of the chancel. This older altarpiece was removed and placed in the vestry in connection with the reconstruction work in 1931, but was once more placed in the church itself about 1990. 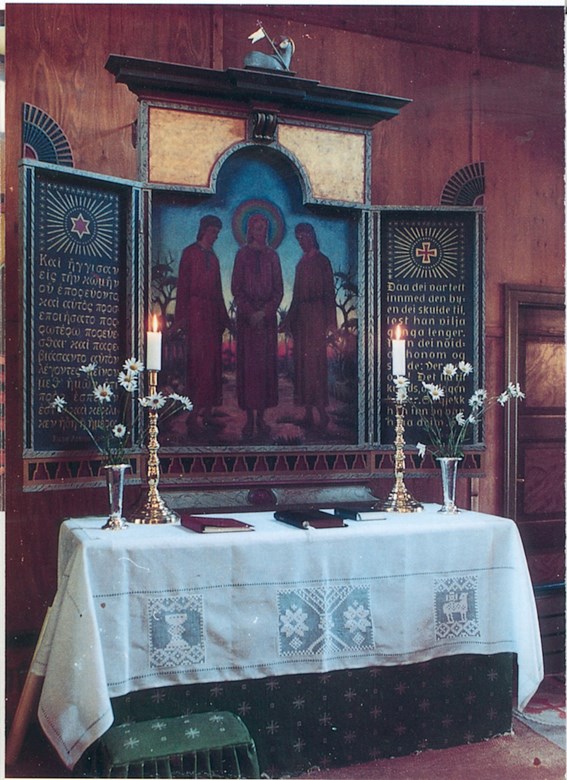 On the altar there are two brass candlesticks. For Holy Communion there is a chalice and paten made of silver. The pulpit probably dates from 1861. The font is undated. The baptismal bowl from 1910 is a gift from the mother of a German officer who lost his life in the mountains around Fjærland in 1910 and was buried here. The holy water ewer is made of copper.

A six-armed brass chandelier hangs from the ceiling in the nave, and this is the oldest object in the church. It was given to the church by a family at Berge who had lost their daughter in an accident. In addition, there is a twenty-armed brass chandelier from 1972. The organ is from 1976 with 16 registers, built by J.H.Jørgensen in Oslo. The church has two steel bells from 1894 - the old bell cracked on Christmas Eve, 1893. One of the bells carries an inscription from Matthew 11;28 ("Come unto me, all ye that labour and are heavy laden, and I will give you rest."), whereas the inscription on the second is taken from Psalms 103;2 ("Bless the LORD, O my soul, and forget not all his benefits.").

The vicar was delayed

We frequently hear of the long distances churchgoers had to travel in order to get to church. The westernmost hamlets along the Fjærlandsfjord are situated close to 30 kilometers (close to 20 miles) from the church at Mundal. From the hamlets of Romøyri and Hammersnes they had to start early in their rowboats to get to church in time for the Sunday service. However, if the congregation usually managed to get to church in time, this was not always the case for the clergyman. He had an even longer distance to travel, coming all the way from the vicarage at Lunde in Balestrand, and he did not always feel happy or comfortable about the long voyage to church, either. The local people have had many stories to tell about the delayed clergyman, even in more recent times. There was a wedding in the late 1950s, and the bridal procession stood waiting at the church, but no boat could be seen on the fjord. What were they to do about this unfortunate delay? The bride's family wanted to give the invited guests a good impression of the village, and so hit upon the idea of whiling away the time by taking the guests on a sightseeing trip up the valley to the Bøyabre glacier. When they returned to the church, the clergyman had finally turned up. The wedding ceremony then went according to plan, and the guests had had a rather unusual experience for their memory books.

The characteristic building style of the Fjærland church is based on the stave church model, but with a more modern and simplified form. The former high and narrow windows with their pointed arches on the side walls were replaced by small-paned windows only half the previous size. The shape of the turret was also changed by the replacement of the copper-covered steeple with a rod topped by a cross.
Owner: Balestrand kyrkjekontor. - Date: 1998. - Photographer: Ukjend.
Balestrand kyrkjekontor.
1998.
Ukjend.