Olden church is a wooden longchurch located at the farm of Brynestad in the municipality of Stryn. The church, with a seating capacity of 500, was consecrated on 19 December, 1934 by the bishop Andreas Fleischer. The architect Daniel J. Muri made the designs. Olden church is a "sokn" church for Olden "sokn" in the Innvik parish. 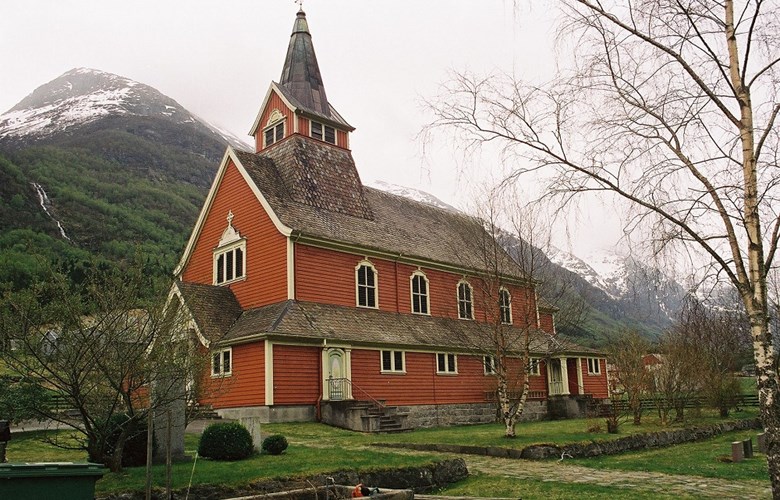 Olden church is situated on the farm of Brynestad some distance south of the village centre of Olden. The house in the foreground is the so-called 'English house', used as a residence for English lords while they were fishing for trout and salmon in the Olden river.

On Midsummer's Day in 1934, the foundation stone for the Olden church was laid. Pictures from the consecration half a year later show a church decorated for Christmas. When the construction work was carried out so quickly, it shows how much the villagers were willing to work to get a new church. It must be added, however, that the construction took place during the Depression of the 1930s, when unemployment was high.

There were more than enough workers who were happy to make some money on the church construction. The longstanding disagreement whether to build a new church or restore the old one had also tried their patience long enough. Now they simply wanted to get on with building a new church.

The exterior of the church is painted in a reddish-brown colour with a pale contrasting colour on cornices and corners. It is an elegant church, built in a basilica style with a raised central room and side aisles. The steeple is placed on a ridge turret close to the gable. The turret base has the same colour scheme and angles as the rest of the church and has gables to the east and west. The architect, Daniel J. Muri, met with some opposition from the National Building Inspector, who thought that the church should be designed lower and smaller. Muri, however, stuck to his original design, and kept a watchful eye on the construction site to ensure that this "Everyman's cathedral" was erected according to his designs. And the end product was a high and elegant church. 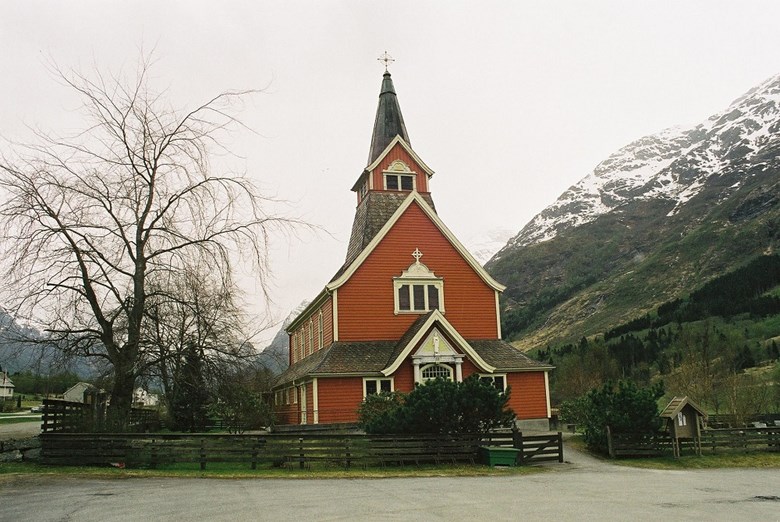 Similar to the old church, the interior is unpainted, both in terms of ceiling, walls and pews, but in the new church these have instead been treated with a rather dark varnish. The unusually big chandeliers provide good lighting and atmosphere in the church room. Along the walls in the side aisles, the windows are grouped in pairs. They are small-paned leads with red frames and small, stylized lilies in the centre. The walls in the central aisle are made in the same way, but with windows at two levels. A fine detail is the rounded corners on the top row. In the chancel there is a window high up on either side of the walls, in addition to the stained-glass window on the east wall. The chancel has the usual vestries on both sides.

At various places in the church room there are some angels of various sizes. Some are portrayed with bodies, others merely with angel heads and spread wings. It was Arne Kinsarvik, son of Lars T. Kinsarvik, who was responsible for these angels, the decoration of all the woodwork in the chancel, as well as other carvings, with good assistance from a number of local craftsmen. The work is carried out in golden décor, in line with other details elsewhere in the church, for example the crosses in the altar rail. Both the chancel and the nave have flat ceilings, slanting down towards the side walls. In addition to braces connected to the walls, there are supporting wires between the walls. These supporting measures were installed in the mid-1970s, after a hurricane gave the congregation the fright of their lives during a service.

When the new Olden church was built, the porch was a part of the main building with staircases on both sides leading up to the gallery. For the 50th anniversary celebration in 1984, the church was extended with a new entrance section which contains both toilet facilities and a mortuary room.

The altarpiece from 1934 is made by Bjørn Smith-Hald. The congregation had three different alternatives to choose from, but they eventually decided unanimously to accept Smith-Hald's draft, probably after strong pressure from the architect. The altarpiece has a portrayal of Jesus which is rather special, to put it mildly. His countenance looks tired and his face is turned away as he comes out of the grave. The artistic impression is not at all in keeping with the jubilant inscription: "He has risen". Since 1992, the question has been raised to replace the painting in the altarpiece. In 1999, it was recommended to go in for a draft made by Liv Benedicte Nielsen, more adapted to the stained-glass painting. 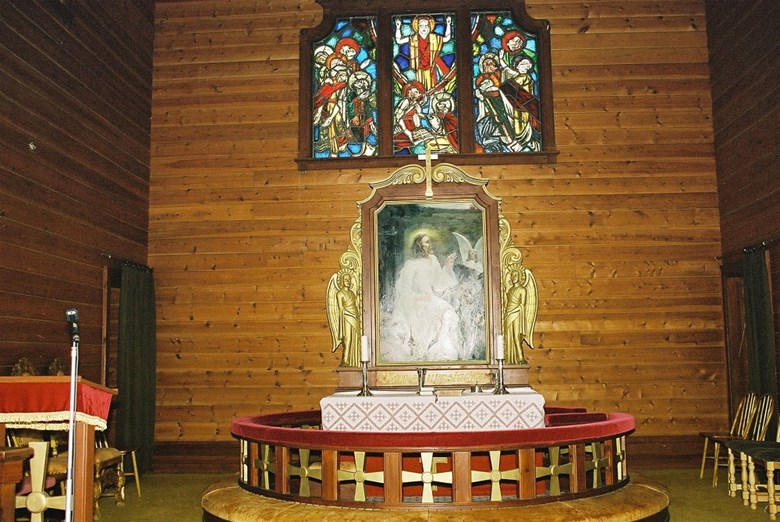 On the altar there are two candlesticks in silver plate. The Holy Communion set consists of a chalice, a paten, a pyx and a wine flagon. The pulpit has carved decorations, and, like the font, dates from 1934. The baptismal bowl and the holy water ewer are made of silver plate. The baptismal bowl has the inscription: "Suffer the little children to come unto me, and forbid them not" (Mark, 10;14).

The stained-glass painting from1936 made by the glazier R. Rognaldsen, Bergen, shows the Ascension. Above the stained-glass painting hangs an eye, made by Arne Kinsarvik. The eye is an ancient symbol of the vigilant God looking after His congregation. The painted wooden reliefs on the nave walls are made by Kolbjørn Skarstein and Jakob Høgalmen. The entrance door is carefully made. Above the door is a Christ figure, with an expression corresponding to the words of Jesus in John, 6;37 in the inscription below: "and him that cometh to me I will in no wise cast out". 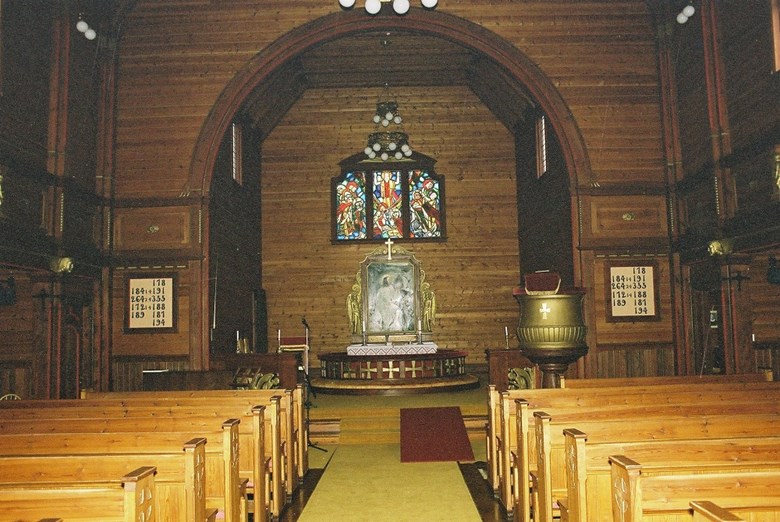 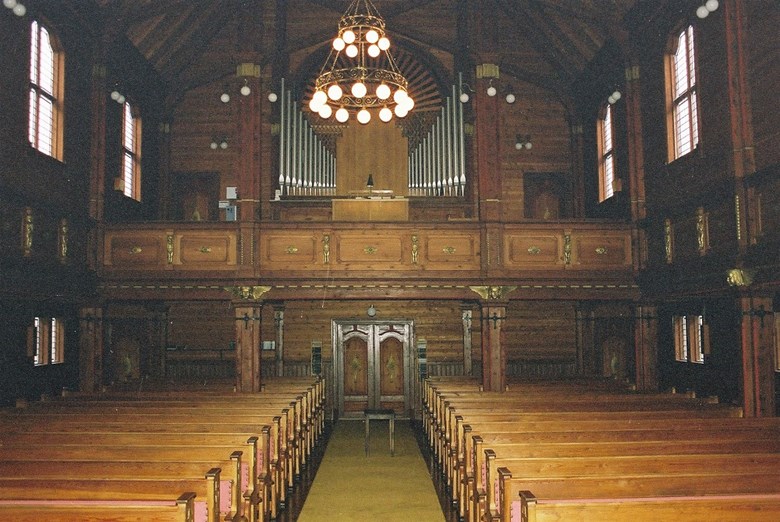 The hurricane nearly destroyed the church

The winter storms in Olden may be severe, and it was such a southerly wind that nearly destroyed a relatively new timber church in 1757, on the site of the present cruciform church. In 1975, a hurricane once again hit the church so hard that it shook in its foundations. It happened in the afternoon on 21 December, on the fourth Sunday of Advent, when the congregation was gathered to sing in Christmas. The chandeliers in the central nave started to sway back and forth, and just before the service was to commence, the lights went out. Suddenly the congregation found themselves in total darkness. The walls squeaked, and everybody wanted to get home safely as quickly as possible.

As the hurricane struck down the mountainside on the eastern side of the church, it was impossible to get out by the main entrance because then the wind might fill the church room and lift the roof up in the air. In small groups people left the church through a door on the western wall, but the short walk to the car park was tough enough. Some people lost their glasses, caps, hats, bags and purses. One woman saw her old-age pension disappear when her purse blew open and the money was spread to the four winds. After this event, the "sokn" council decided to fasten supporting wires to the walls of the church.

The interior of the church, seen from the nave towards the chancel. The interior is unpainted, but the walls and the ceiling are covered in a dark varnish, whereas the pews have a lighter varnish. The pulpit from 1934 has carved ornamentation.
Owner: Stryn fellesråd. - Date: 2003. - Photographer: Svein F. Rønne.
Stryn fellesråd.
2003.
Svein F. Rønne.