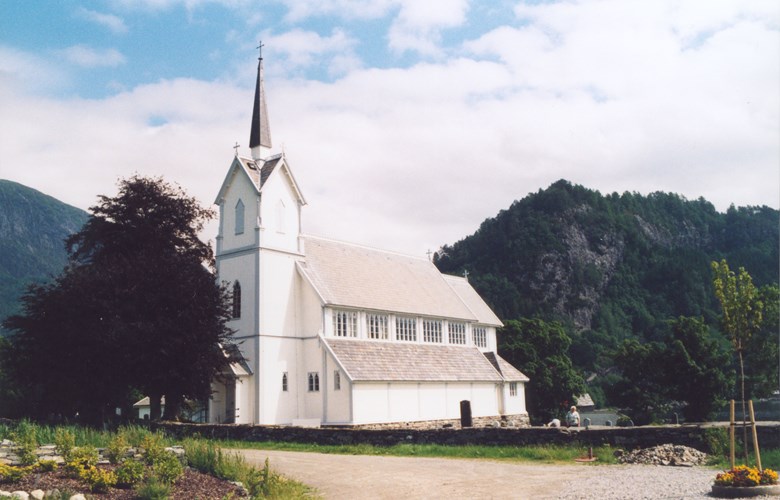 The memorial stone for Ola Espedal is placed on his grave on the south side of the Holmedal church.

The memorial stone on Ola Espedal's grave is in dark rock with a polished front. It is about 170 centimetres high, 57 centimetres wide, 19 centimetres at the base, and 14 centimetres at the top. The stone is fastened in a rectangular concrete foundation, which is around 15 centimetres high.
Below a cross at the top is inscribed: "Lærar og kyrkjesongar * OLA ESPEDAL * [f.] 25-10-1900 * [d.] 27-2-1951 * Joh. 17.24." (Teacher and parish clerk OLA ESPEDAL 25 October 1900 - 27 February 1951 John, 17,24) . Below the inscription is the mark of the Sunnfjord Songarsamband (choir association), and at the lower part the names of those who had the stone erected: "Holmedal blandakor * og mannskor." (Holmedal mixed choir and male choir)
Note: The Bible verse John, 17,24:
"Far, eg vil at dei du har gjeve meg, skal vera hjå meg der eg er, så dei får skoda min herlegdom, som du har gjeve meg av di du elska meg før verda vart grunnlagd." (Father, I will that they also, whom thou hast given me, be with me where I am; that they may behold my glory, which thou hast given me: for thou lovedst me before the foundation of the world)

Ola Espedal was born on 25 October 1900, on the farm of Espedal by the lake of Hovlandsvatnet south of Flekke in Fjaler municipality. He was the son of the farmer Ole Jensson (1872-1938), and Anne Marie Olsdatter Sande (1875-1942), and number two in a family of nine brothers and sisters. In 1929, Espedal married the teacher Seri Karlsdotter Taksdal from Time in the district of Jæren. They built a home at Holmedal and had four children. Ola Espedal died unexpectedly on 27 February 1951, only 50 years old. Seri became a widow at 50, and died near 90 years old, living with her daughter Målfrid Espedal Ihle at the vicarage in Fana.
Ola Espedal went to the Stord teachers' training school and was certified as a teacher in 1922. He later studied for one year at Noregs lærarhøgskule, graduating there in the spring of 1927. Espedal became a teacher in his home community, the Espedal school district, for the period 1922-1928, before he moved to Holmedal, where he was a teacher and parish clerk until he died in 1951.
In addition to his school work, Ola Espedal was active in several departments, chiefly in organized choir and music, the temperance movement, and religious organizations. He conducted the mixed choir at Holmedal from 1928, and was chairman of the Sunnfjord Songarsamband (choir association) from 1938. - It is safe to say that Espedal was the driving force in the choir activity in the Sunnfjord district, according to one of the obituaries for him after his death.

Close to 400 people followed Ola Espedal to his final resting place, on Tuesday 5 March 1951. "The largest funeral ever at Holmedal", the newspaper Firda Folkeblad wrote for the headline of its report. And nobody could remember seeing so many wreaths at a funeral: - from the family at home, and at Jæren, relatives, from other families and individuals, from several municipal institutions in Fjaler: Fjaler school board, Fjaler teachers' union, Holmedal parish mission association, the temperance association Moldura, from Sunnfjord Songarsamband (choir association), the municipal works board in Fjaler, Holmedal mixed choir, male choir and music association, Holmedal school district, from others in Sunnfjord: Kalvåg choir, Sunnfjord Ungdomsskule (folk high school), and many more, - in all about 130 wreaths and flowers.
The oldest daughter, Målfrid, who received the sad message by the headmaster Undheim when she was a student at Bryne landsgymnas (secondary school), laid a wreath from the closest family and ended her words of thanks: "Father was so fond of flowers, so he was always looking forward to the spring. And now, I think, father, that you are where there is eternal spring."

The choirs at Holmedal wished to honour Ola Espedal with a memorial stone, and his family accepted a stone on Espedal's grave. The memorial stone was unveiled in the summer of 1953 in connection with the annual choir festival of Sunnfjord Songarsamband, which this year took place at Holmedal. The second day of the festival, Sunday 14 June, began with a service at the Holmedal church and the unveiling ceremony. A crowd of people were present, and Lars Søraas from Randabygda i Nordfjord gave the unveiling speech. After the unveiling he handed the stone over to the family. The widow, Seri Espedal, received it and expressed her thanks for the honour that had been shown Ola Espedal in this way.